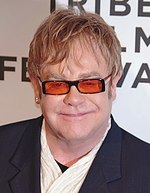 Sir Elton Hercules John CH CBE (born Reginald Kenneth Dwight; 25 March 1947) is an English singer, pianist and composer. Commonly nicknamed the "Rocket Man" after his 1972 hit single of the same name, John has led a commercially successful career as a solo artist since the 1970s, having released 31 albums since 1969. Collaborating with lyricist Bernie Taupin since 1967, John is acclaimed by critics and musicians, particularly for his work during the 1970s, and his lasting impact on the music industry. John's music and showmanship have had a significant impact on popular music. His songwriting partnership with Taupin is one of the most successful in history. More about Elton John

Current items with a signature of Elton John

These are the most current items with a signature of Elton John that were listed on eBay and on other online stores - click here for more items.

Traded items with a signature of Elton John

The most expensive item with a signature of Elton John (ELTON JOHN signed ATLANTA BRAVES Jersey from Elton's Closet 1996 One of a Kind!!) was sold in September 2022 for $5500.00 while the cheapest item (Elton John signed paper sheet) found a new owner for $0.01 in September 2019. The month with the most items sold (37) was August 2020 with an average selling price of $115.99 for an autographed item of Elton John. Sold items reached their highest average selling price in October 2019 with $458.49 and the month that saw the lowest prices with $0.99 was January 2008. In average, an autographed item from Elton John is worth $79.00.

Most recently, these items with a signature of Elton John were sold on eBay - click here for more items.

Elton John Shows Postponed After He Tests Positive for the Coronavirus (01/25/22):

Elton John's Estranged Mother Reveals Reason Behind Seven Year Rift With Son (03/2015): The singer’s mother Sheila Farebrother hired an Elton impersonator to entertain her guests at her 90th birthday. Sheila Farebrother, the 90 year old mother of singer Elton John , has revealed the reason why she and her superstar son have not spoken in seven years.

Elton John, Skrillex and 6 other NYE concerts beyond Times Square (12/2014): Taylor Swift in Times Square not your thing? Don’t worry! Anyone spending New Year’s Eve in New York City won’t have a shortage of musical options to help celebrate the...

Elton John delights KeyArena with nearly 3 hours of hits (09/2014): Elton John served up hit after hit in his show at KeyArena Saturday night, to the clear delight of the audience. The nearly three-hour performance drew heavily from his landmark 1973 album “Goodbye Yellow Brick Road” (reissued in a lavish box set earlier this year). John’s set

Elton John: Jesus would support same-sex marriage (06/2014): The 67-year-old singer told Sky News that Jesus Christ was "all about love and compassion and forgiveness"

Miguel Scores Elton John Cover, NSFW Video for Big Sean's 'Ashley' (01/2014): Miguel is making moves to secure a huge 2014 for himself. The Los Angeles-based singer/producer is aiming to release his third album this year, and he's laying down a pretty solid, ahem, yellow-brick road ahead of that goal...

Elton John, master of old and new, at Wells Fargo (11/2013): Elton John has been a lot of things to a lot of people: a Brit with a Southern Gothic lean, a garishly appointed Liberace-like entertainer, a Disney shill, one of pop's first "out" personalities.

Reliable Source: Elton John arrives in D.C. to pick up Rockefeller Foundation aw (10/2013): The singer was at the Red Cross Headquarters.

Elton John Goes Home Again In New Video (08/2013): Elton John is giving fans a taste of his long-awaited upcoming album The Diving Board with his new music video for 'Home Again.'

Elton John to turn action star for new film? (07/2013): Singer Elton John is reportedly set to star in a film The Secret Service, where he will be seen brawling in a huge fight scene.

Elton John Going Old School On New Album Recap (06/2013): Fans of Elton John who've been hoping for him to return to his early-'70s stripped-down format are about to get their wish.

Elton John calls truce with Madonna (04/2013): London, April 29 (ANI): Sir Elton John has said that his nearly decade-long war of words with Madonna has come to an end.

Sir Elton John brought his son Zachary to his Oscars party - but wouldn't let hi (02/2013): The 'Rocket Man' singer and his husband David Furnish showed off their adorable two year old to the many celebrity guests who attended his 21st Annual Academy Awards Viewing party held to raise money for his charity, the Elton John AIDS Foundation.

Buskers who make Rod Stewart and Elton John's parties rock (12/2012): Among the stars The Gypsy Queens have performed to are Elton John, Prince Harry, Rod Stewart, Prince Albert of Monaco and David Beckham.