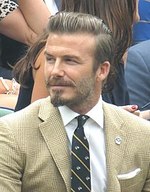 David Robert Joseph Beckham OBE (UK: /ˈbɛkəm/; born 2 May 1975) is an English former professional footballer, the current president & co-owner of Inter Miami CF and co-owner of Salford City. He played for Manchester United, Preston North End (on loan), Real Madrid, AC Milan (on loan), LA Galaxy, Paris Saint-Germain and the England national team, for which he held the appearance record for an outfield player until 2016. He is the first English player to win league titles in four countries: England, Spain, the United States and France. He retired in May 2013 after a 20-year career, during which he won 19 major trophies. More about David Beckham

Current items with a signature of David Beckham

These are the most current items with a signature of David Beckham that were listed on eBay and on other online stores - click here for more items.

Traded items with a signature of David Beckham

Most recently, these items with a signature of David Beckham were sold on eBay - click here for more items.

Beckham’s Miami team to play MLS home opener March 14 (11/13/19): David Beckham’s new MLS team will play its first home match against his former club. Inter Miami officials announced Wednesday that the club's home debut will be March 14 at 2:30 p.m. against the LA Galaxy. The Galaxy are a fitting home debut opponent for Inter Miami: Beckham has his new team in

Beckham’s Miami’s team to play MLS home opener March 14 (11/2019): David Beckham’s new MLS team will play its first home match against his former club. Inter Miami officials announced Wednesday that the club's home debut will be March 14 at 2:30 p.m. against the LA Galaxy. The Galaxy are a fitting home debut opponent for Inter Miami: Beckham has his new team in

Beckham confirmed as Salford City co-owner (01/2019): David Beckham will be unveiled as co-owner of Salford City on Saturday after the Football Association approved his application to become a director.

David Beckham shares tribute to niece Peggy to celebrate 1st birthday (12/2018): The retired footballer, 43, took to his Instagram page on Saturday to post an adorable snap of him cradling the little one, the daughter of David's sister Joanne, in his arms.

David Beckham helps launch Tudor’s redesigned Glamour Double Date (11/2018): The soccer legend was among the first in the world to wear the watch, which features a new dial design

David Beckham is to be honoured with a Legend of Football Award. (02/2015): The 39-year-old star - who played for the likes of Manchester United and Real Madrid during his career - is to be honoured at the 20th Anniversary HMV Football Extravaganza at the Grosvenor House Hotel in London on September 1, which will raise funds for music therapy charity Nordoff Robbins.

David Beckham is "looking forward" to turning 40. (01/2015): The 39-year-old star, who is set to celebrate the milestone on May 2, doesn't want to have a big party for the occasion, but insists he isn't afraid of getting older.

David Beckham makes Only Fools and Horses cameo: "Shut up you tart" (12/2014): The ex-footballer stars opposite Sir David Jason and Nicholas Lyndhurst in the one-off skit.

David Beckham, Son Brooklyn Involved in Car Accident After Soccer Game: Report (11/2014): David Beckham and his son Brooklyn were reportedly involved in a car accident in Hertfordshire, England on Saturday, Nov. 29, according to The Telegraph . The incident occurred after the former soccer pro picked up Brooklyn, 15, from his soccer game at Arsenal's training ground.

David Beckham sports bandaged arm following motorbike crash as he arrives at LAX (08/2014): DAVID Beckham fell off his motorbike in Sunset Boulevard on Thursday afternoon, and yesterday he was showing the injuries of his nasty accident.

David Beckham's Expansion MLS Franchise In Miami Is Suddenly In Danger Of Not Ha (07/2014): Dade county and the city of Miami have killed...

What Asia's David Beckham did next (05/2014): Asia's answer to David Beckham explains why he walked away from football -- but why he still loves it.

David Beckham wants to buy his own taxi. (03/2014): The retired soccer star - who has children Brooklyn, 15, Romeo, 11, Cruz, nine, and two-year-old Harper with wife Victoria - has been shopping for an iconic London black cab as he hopes the vehicle would help him blend in amongst other motorists.

Hacking Trial: Rebekah Brooks Talks David Beckham, Andy Coulson Relationship (02/2014): The former CEO of the U.K. newspaper arm of Rupert Murdoch's News Corp says the soccer star got $1.6 million for book excerpts and takes issue with the prosecution's claim that she had an affair with Coulson. read more

David Beckham and H&M's Super Bowl Ad Could Change Advertising Forever (01/2014): Forget for a moment that David Beckham will likely be shirtless in this Super Bowl ad for . Because the really eye-opening part is not Beckham, but a new technology that lets shoppers buy goods directly from the TV.

David Beckham cries over 'Friends,' 'The Office' and Disney movies (12/2013): OK, OK. No one here is going to try to pretend they didn't tear up when Ross first kissed Rachel or when Michael Scott said goodbye to Jim -- are we?

David Beckham recalls sexual hazing as a teen soccer player (11/2013): LONDON, Nov. 30 (UPI) -- British soccer star David Beckham says he was subjected to sexual abuse as part of a hazing incident when he was an up and coming start of the sport.

David Beckham hopes son could play on his Miami MLS team (10/2013): LONDON (AP) -- David Beckham is finalizing plans to start a Major League Soccer franchise, and hoping son Brooklyn could one day take the field for the team.

David Beckham's 'attention-seeker' daughter Harper shows dad who's boss! (08/2013): David Beckham recently went to watch the Los Angeles Dodgers game, but did not get to see much of it thanks to his playful two-year-old daughter Harper.

David Beckham Could Bring MLS Back to Florida (07/2013): Beckham expects to announce plans to start an expansion franchise in a few months Photo Credit: Getty Images

David Beckham Enjoys Afternoon Out In London With Super Cute Harper (04/2013): David Beckham totes his adorable daughter Harper Beckham while out and about in London

David Beckham Named Among Hollywood's Sexiest Shirtless Hunks (03/2013): We may use your e-mail address to send you the newsletter and offers that may interest you, on behalf of Us Weekly and its partners. For more information please read our Privacy Policy .

David Beckham, Victoria Beckham enrol sons at London school? (12/2012): The family will reportedly settle in London after their move from LA.

David Beckham has his hands full after MLS (11/2012): David Beckham is flattered by the "interesting and exciting options" facing him as he prepares to farewell LA Galaxy and Major League Soccer, the former England captain said on Thursday.

David Beckham boosts football crowds in US (10/2012): Crowds are on the increase to watch MLS matches and to see players like David Beckham and Thierry Henry in action. It is now the seventh most watched league in world football.

David Beckham made hair mistakes (09/2012): David Beckham admits some of his previous haircuts have been 'mistakes'.

David Beckham's sons were inspired by the London Olympics (08/2012): The soccer star - who was an ambassador for the 2012 Games - felt "overwhelmed with pride" as he joined Brooklyn, 13, Romeo, nine, and seven-year-old Cruz at a number of events and is thrilled the spectacle has inspired the youngster to try their hands at new sports.

David Beckham left out of soccer team (06/2012): DAVID Beckham is ''very disappointed'' to have been left out of Great Britain's soccer team for this summer's London Olympics.

David Beckham picked out Victoria's dress for vow renewal (05/2012): Soccer star David Beckham planned every last detail of his vow renewal with wife Victoria - he even picked the dress the fashion designer wore on the big day.

Josh Hutcherson was star-struck when he watched David Beckham play soccer (04/2012): The 'Hunger Games' star doesn't get nervous when he meets other actors but he felt giddy when he attended a Los Angeles Galaxy game in which the former England captain played.

David Beckham - David Beckham's Tattoo Sparks Complaints (03/2012): Supermarket bosses in the U K have apologised after sending thousands of schools a promotional poster featuring a photo of David Beckham flashing a saucy tattoo The soccer star has an inking of wife Victoria wearing just a bra and underwear on his left f...

Galaxy Soccer Star David Beckham Bares Nearly All In Super Bowl Commercial (01/2012): Galaxy soccer star David Beckham stripped down to his skivvies for an underwear ad that will debut during the Super Bowl, but fans can get a sneak peek at the commercial online.

David Beckham sets up Galaxy's 1-0 win over Red Bulls (10/2011): His assist on Mike Magee's first-half goal and the team's tight defense lead to victory in the first game of a two-game, total-goals playoff series. And tempers flare afterward. Some of Major League Soccer's most decorated players were at Red Bull Arena on Sunday.

Starting to feel my age: David Beckham (09/2011): London, Oct 1 : Soccer ace David Beckham, 36, says he has started feeling his age as he now has more aches and pains when he wakes up.

David Beckham - David Beckham Wants One More Child (07/2011): David Beckham wants one more child. The soccer star - who has sons Brooklyn, 12, Romeo, eight and Cruz, six as well as two-week old daughter Harper Seven with wife Victoria - reveals he would be keen to have one final child to complete their family, b...

David Beckham - David Beckham Downloads Beatles For Daughter (06/2011): David Beckham has been downloading The Beatles songs for his unborn daughter. The soccer ace has been preparing for the arrival of his first daughter with fashion designer wife Victoria next month by downloading the legendary band's hits arranged...

Snoop Dogg - Snoop Dogg Gets Music Feedback From David Beckham (05/2011): Rapper Snoop Dogg turns to soccer ace David Beckham for feedback before releasing any new songs. The Gin and Juice hitmaker admits he and the superstar athlete are such close pals, he relies on hip-hop fan Beckham's opinions to judge the standard of...

ROYAL SCREW-UP: David Beckham Wore His Medal Incorrectly At The Royal Wedding (04/2011): British soccer legend David Beckham, internationally known as a fashionista, wore his Order of the British Empire medal on the wrong lapel while attending the Royal Wedding.

David Beckham tougher than gansters, says tattooist (02/2011): London, Feb 27 : Soccer star David Beckham, who recently revealed his latest body art on Facebook, sat through the 6-hour procedure without flinching, according to his tattooist.