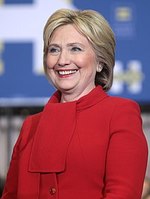 Hillary Diane Clinton (née Rodham; born October 26, 1947) is an American politician, diplomat, lawyer, writer, and public speaker who served as the 67th United States secretary of state from 2009 to 2013, as a United States senator from New York from 2001 to 2009, and as first lady of the United States from 1993 to 2001 as the wife of President Bill Clinton. A member of the Democratic Party, she was the party's nominee for president in the 2016 presidential election, becoming the first woman to win a presidential nomination by a major U.S. political party. Clinton won the popular vote in the election, making her the first woman to do so. However, she lost the Electoral College vote and thereby lost the presidential election. More about Hillary Clinton

Current items with a signature of Hillary Clinton

These are the most current items with a signature of Hillary Clinton that were listed on eBay and on other online stores - click here for more items.

Traded items with a signature of Hillary Clinton

Most recently, these items with a signature of Hillary Clinton were sold on eBay - click here for more items.

Prosecutors and Defense Duel in Closing Arguments of Sussmann Trial (05/28/22): A verdict is expected as early as Tuesday in the case brought by a Trump-era special counsel against a lawyer with ties to Hillary Clinton’s 2016 presidential campaign.

Key Witness in Durham Case Offers Detailed Testimony of 2016 Meeting (05/19/22): A former F.B.I. official said Michael Sussmann, a lawyer accused of lying to the F.B.I., told him he was reporting Trump suspicions on his own, not on behalf of Hillary Clinton’s campaign.

Democrats Agree to Pay $113,000 Over Campaign Spending Inquiry (03/30/22): Hillary Clinton’s campaign and the Democratic Party described payments to a law firm that commissioned scrutiny of Trump-Russia ties — leading to the Steele dossier — as legal services, not opposition research.

Hillary Clinton Reads Discarded Victory Speech From 2016 Election (12/09/21): Mrs. Clinton read the long-shelved speech aloud for her offering on MasterClass, a site featuring lessons from prominent figures in the arts, business and other fields.

The big lie that won’t die: How Trump and his allies’ favorite bogus fraud claim (12/2020): Over and over again in recent weeks, Trump and his allies have claimed Joe Biden did suspiciously better than Hillary Clinton in urban areas in swing states. It's not true, but that doesn't seem to matter to them.

Biden leads Trump. So did Hillary Clinton. For Democrats, it’s a worrisome campa (10/2020): Voters, party officials and campaign aides are caught between optimism and dread, the residue of seeing Clinton’s expectations of victory dashed.

Trump’s in worse position than in 2016 in part because his opponent is in a much (09/2020): A new poll from Quinnipiac University shows how much more positively Joe Biden is viewed now than Hillary Clinton was in 2016.

Hillary Clinton, in a poignant appeal, warns Democrats not to repeat 2016 (08/2020): Clinton speaks Wednesday to a convention that, had things gone differently, would be renominating her. Instead she has a bittersweet message: Don’t repeat the mistakes of 2016.

Bernie Sanders, seeking peace with Joe Biden, asks his own delegates to turn dow (05/2020): The Vermont senator’s supporters vocally rebelled against Hillary Clinton in 2016; this year his delegates are being asked to sign nondisparagement agreements before the convention.

Hillary Clinton endorses Biden as Democrats continue unity push (04/2020): The 2016 Democratic nominee became the latest party heavyweight to formally support Joe Biden. Her move extends the Democrats’ unity push, but Clinton has critics inside and outside the party.

Trump hails Weinstein convictions as ‘great victory’ for women, distances himsel (02/2020): Speaking at a news conference in India, Trump asserted it was Democrats — including Michelle Obama and Hillary Clinton — who loved Weinstein for his donations.

Bernie Sanders’s Surge Owes a Lot to Voters of Color (01/2020): In 2016, the Vermont senator failed to overcome Hillary Clinton’s wide lead among African-American and Latino voters. This time, things are shaping up differently.

GOP moderate refuses to defend Trump on Ukraine but won’t back impeachment (12/2019): Rep. Brian Fitzpatrick is one of two House Republicans running for reelection in a district Hillary Clinton won in 2016. The question is whether he pays a political price for his impeachment vote.

Did New Hampshire Fall Out of Love With Bernie Sanders? (11/2019): New Hampshire is as close to a must-win state as Mr. Sanders has, and, despite his overwhelming victory against Hillary Clinton in 2016, winning is far from a sure thing right now.

Tulsi Gabbard misquotes Hillary Clinton’s jab at her (10/2019): The 2020 Democratic presidential hopeful claims Clinton said the Russians were grooming her for a third-party bid to ensure Trump’s re-election. Actually, Clinton said it was the GOP.

Podesta says Hillary Clinton will not be running for the presidency in 2020 (01/2019): Podesta described rumours Clinton is mulling a presidential bid as "media catnip."

Student reacts to letter from Hillary Clinton (12/2018): Hillary Clinton wrote a letter to a 8-year-old Martha Kennedy Morales who lost an election for class president, telling the young student that she knows "too well, it's not easy"

FACT CHECK: Did Hillary Clinton Wear Blackface at a Costume Party? (01/2016): A photograph showing a woman in blackface and a man dressed as a hillbilly is not a picture of Bill and Hillary Clinton.

Hillary Clinton emailed on iPad, too, documents show (03/2015): WASHINGTON (AP) -- Hillary Rodham Clinton emailed her staff on an iPad as well as a BlackBerry while secretary of state, despite her explanation she exclusively used a personal email address on a homebrew server so that she could carry a single device, according to documents obtained by The

Hillary Clinton Praises PM Modi's Focus on Sanitation (10/2014): Former US Secretary of State Hillary Clinton praised Prime Minister Narendra Modi for his focus on sanitation and cleanliness and called for more women participation for the world economy to recover q...

Hillary Clinton on offense over Benghazi as book tour approaches (05/2014): If anyone had any illusions that Hillary Clinton’s June book tour would feel like anything other than the launch of a presidential campaign, the furious debate over her depiction of her State Department tenure this week corrected that impression.

Documents show Hillary Clinton's role in husband's presidency (02/2014): Bill Clinton's aides revealed concern early in his presidency about the health care overhaul effort led by his wife, Hillary Rodham Clinton, and later about what they saw as a need to soften her image, according to documents released Friday.

Florida poll: Hillary Clinton leads Jeb Bush, Rubio in matchups (01/2014): TALLAHASSEE — A new poll shows Hillary Clinton is a favorite among Florida voters in a hypothetical 2016 presidential matchup against either of the state's two best-known Republicans.

Hillary Clinton outpaces Obama in foreign gifts (08/2013): But under law, most gifts must go to the National Archives or the General Services Administration.

McCain: Hillary Clinton vs. Rand Paul in 2016 would be ‘tough choice’ (07/2013): Hillary's a "rock star" and Palin was a good VP choice, the Arizona senator and 2008 GOP presidential nominee says in a new interview.

Hillary Clinton rules out another bid for presidency (06/2013): During a visit to New Zealand this past week, U.S. Sectary of State Hillary Clinton said she had no plans to be the first female president of the U.S.

Hillary Clinton coming to GR in June (03/2013): Former Secretary of State, former Senator from New York, and former First Lady Hillary Rodham Clinton will be the guest of honor for the The Economic Club of Grand Rapids this June.

Hillary Clinton, post-concussion, back to work next week (12/2012): The Secretary of State has been out of the public eye since December 13 due to a concussion sustained after fainting

Hillary Clinton Not a 'Wild-Eyed Optimist' on Iran (11/2012): The secretary of state supports the IAEA ambassador's threats toward Tehran's nuclear program.

Hillary Clinton Condemns Russia for Failing to Act over Syria Violence (05/2012): US Secretary of State accuses Moscow of propping up Bashar al-Assad regime and warns that situation will lead to civil war.

Hillary Clinton in Middle East push to end crackdown in Syria (03/2012): US Secretary of State Hillary Clinton met King Abdullah on Friday in the Saudi capital as she kicked off a two-country tour aimed at raising pressure on the Syrian regime.

Democratic fantasy ticket: Barack Obama and Hillary Clinton (12/2011): With Barack Obama likely facing a daunting battle in next year’s race, some Democrats have suggested having Joe Biden, the current Vice-President, swap jobs with Hillary Clinton, the Secretary of State.

Tim Gunn Shoots Off Big Mouth at Hillary Clinton on 'Lopez Tonight,' Says 'She's (10/2011): Celebrities, lock your closets. When Tim Gunn is in town, no celebrity's wardrobe is safe -- including a political big wig in the nation's capital who's had the ear of two presidents.

Hillary Clinton: Women must be part of new Middle East (09/2011): If women are left out of the democratic transformation, she said, the country "will not be a true democracy".

She's baack! Hillary Clinton questions return to Obama White House (08/2011): With Obama's job approval in the dumpster, there are new questions about a Democratic primary challenger in 2012.

Hillary Clinton says Taliban outreach key to Afghan solution (06/2011): Hillary Clinton, the US secretary of state, has said that Washington's "preliminary outreach" to the Taliban was part of a necessary but unpleasant attempt to achieve a political solution in Afghanistan.

Federal judge rules against corporate contribution ban in case stemming from Hil (05/2011): In a first of its kind ruling, judge cites an earlier Supreme Court decision that corporations enjoy the same rights as individuals to contribute to campaigns.

Birther row began with Hillary Clinton (04/2011): The lie that Barack Obama was not born in the US has been fuelled by fringe Republicans - but supporters of Hillary Clinton, now Mr Obama's Secretary of State, are largely to blame for starting it.

Hillary Clinton seeks broadened global debate on the Internet as a tool for free (02/2011): Hillary Clinton cites events in both Egypt and Iran as examples of its powers both ways.

Obama, Hillary Clinton 'most admired' (12/2010): President Barack Obama's job approval rating continues hovering around 45 percent, but he once again is the country's "most admired" man, according a USA Today-Gallup poll. Obama was named by 22 percent of respondents, followed by George W. Bush and...