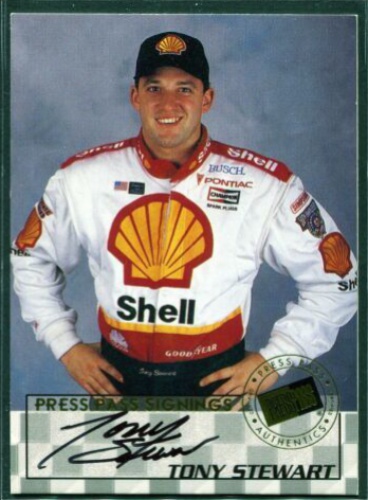 Anthony Wayne Stewart (born May 20, 1971), nicknamed Smoke, is an American semi-retired professional stock car racing driver, current NASCAR team co-owner of Stewart-Haas Racing, and current co-owner of the Superstar Racing Experience. He is a three-time NASCAR Cup Series champion as a driver, winning titles in 2002, 2005, and 2011. As a team owner, he has won NASCAR Cup titles in 2011 with himself and in 2014 with Kevin Harvick as drivers. Throughout his racing career, Stewart has won racing titles in Indy, midget, sprint, and USAC Silver Crown cars. He is the only driver in history to win a championship in both IndyCar and NASCAR. More about Tony Stewart

Current items with a signature of Tony Stewart

These are the most current items with a signature of Tony Stewart that were listed on eBay and on other online stores - click here for more items.

Traded items with a signature of Tony Stewart

The most expensive item with a signature of Tony Stewart (Ncludednascar race used hood.Autographed by Nascar Champion Tony Stewart. Displa) was sold in April 2021 for $5000.00 while the cheapest item (Tony Stewart Signed #20 Duffle Bag) found a new owner for $0.10 in April 2011. The month with the most items sold (45) was February 2022 with an average selling price of $26.78 for an autographed item of Tony Stewart. Sold items reached their highest average selling price in September 2014 with $1324.97 and the month that saw the lowest prices with $1.34 was May 2016. In average, an autographed item from Tony Stewart is worth $20.50.

Most recently, these items with a signature of Tony Stewart were sold on eBay - click here for more items.

Francis to race Indy Lights, eyes IndyCar spot (01/2022): Ernie Francis Jr., who earned national recognition when he won a race in Tony Stewart's all-star series over the summer, has been hired to drive in Indy Lights this season as part of IndyCar's Race for Equality & Change initiative.

Stewart adding NHRA to team with fiancée Pruett (10/2021): Tony Stewart, who fell in love with NHRA while tagging along with fiancée Leah Pruett at her races the past two seasons, will be an official part of the sport in 2022.

Stewart, Evernham to re-create IROC as SRX (07/2020): Tony Stewart and fellow NASCAR Hall of Famer Ray Evernham have teamed with a group of heavyweights to bring an all-star circuit back in 2021.

Stewart scores second win of 2019 season in Florida (03/2019): Tony Stewart has been a man on a mission thus far in 2019, this time adding another 360-cubic-inch engine sprint car victory to his ever-growing racing resume.Stewart, driver of the Tony Stewart/Curb-Agajanian Racing/Rush Truck Centers/Ford Performance/Curb Records/Sage Fruit/Absolute Automation &am

Tony Stewart didn't plan to own a Sprint Car Series: 'This was just an opportuni (01/2015): Congratulations! Your weather is set to . You can change the location at any time. Don't have an account?

Finally some relief for NASCAR's Tony Stewart (11/2014): It was clear that Tony Stewart was still slightly uncomfortable in front of the media on Sunday evening after his driver — Kevin Harvick in the No. 4 Stewart Haas Racing Chevrolet — had just won the NASCAR Sprint Cup Championship.

Tony Stewart Silent After Rough NASCAR Comeback (08/2014): Having missed the last three races due to the Kevin Ward Jr. tragedy, Tony Stewart finished 41st on Sunday night in the Oral-B USA 500 in Atlanta.

NASCAR's Tony Stewart needs another good day at Pocono (07/2014): The three-time Sprint Cup Series champ is on the bubble for the Chase. "I'd hate to think I have to screw up every week to win a race." — Tony Stewart, June 7, 2009.

NASCAR driver Tony Stewart making appearance at Jacksonville J.D. Byrider dealer (06/2014): In order to meet Stewart and have one item signed, you'll need a wristband, and only 500 will be given out.

Tony Stewart enjoying Twitter, interaction with fans (05/2014): DOVER, Del. - Tony Stewart has only been on Twitter since May 16, but he's already realized what he'd been missing all this time.

Is Gene Haas Doing Tony Stewart a Billion Dollar Favor? (04/2014): Gene Haas wants to go Formula 1 racing, and he may just want to do Tony Stewart a favor at the same time by naming Danica Patrick as his driver, opening up a NASCAR seat for a proven driver. Contributor: Ellsworth B Published: Apr 20, 2014

Tony Stewart finally back to his old ways (03/2014): For three-time NASCAR Sprint Cup Series champion Tony Stewart, the first three races of 2014 didn't go exactly as he had hoped.

Tony Stewart considers Daytona a strong test for his healed right leg as he head (02/2014): Tony Stewart does not consider his rough Daytona 500 opener a disaster

Tony Stewart Reflects On Racing At Coliseum (12/2013): FORT WAYNE (21Alive) - In part 2 of an exclusive interview with Tony Stewart, "Smoke" relives his early days of racing at Memorial Coliseum. To submit a comment on this article, your email address is required.

Tony Stewart will be honored at Fort Wayne 'Rumble' (11/2013): Although NASCAR driver Tony Stewart remains injured and won't be driving, his annual trip to Fort Wayne for indoor midget car racing is still on.

The NASCAR Chase isn't the same without Tony Stewart: Things could have been muc (10/2013): On Monday, Aug. 5, the NASCAR Sprint Cup Series season took a drastic turn.

Tony Stewart preparing to talk to the press on Tuesday: It marks the first time (08/2013): Heand#8217;s been out of sight and largely silent for almost a month, but that will end Tuesday when injured

Tony Stewart fine after wreck (07/2013): CHARLOTTE, N.C. (AP) — Tony Stewart was not injured in a scary accident in Canada in which his sprint car rolled five times.

Tony Stewart's 10 best temper tantrums: Check out videos of 'Smoke's' greatest m (06/2013): Although Tony Stewart hasn't been in NASCAR as long as say, Jeff Gordon or Mark Martin, he has become one of NASCAR's loudest voices.

NASCAR fight sees Kurt Busch nudge Tony Stewart off road (04/2013): Kurt Busch ran up front all night, and even led 36 laps. Then came the finish, which he described as a free-for-all, and with him right in the middle of it.

Knighthawks To Host Tony Stewart Saturday (01/2013): Saturday is usually "Lacrosse Night in Rochester," but this Saturday lacrosse will share the spotlight with professional auto racing when three-time NASCAR Champion Tony Stewart visits the Rochester Knighthawks at The Blue Cross Arena.

Outlaw Sprints - Trek Continues In Ohio, Michigan For Tony Stewart Racing (05/2012): INDIANAPOLIS, May 31, 2012: Life on the road with the World of Outlaws (WoO) Sprint Car Series can be defined as one challenge after another. The variables are numerous and no two nights of racing are ever the same.

Fast start not typical for defending champion Tony Stewart (03/2012): Tony Stewart doesn't like fast starts. He sleeps in late and usually doesn't find his stride until most have clocked out for the day. He races the same way.

Tony Stewart still chasing elusive Daytona 500 victory (02/2012): DAYTONA BEACH — It's the elusive Holy Grail of stock-car racing, the last piece of business that will validate the greatness of a three-time NASCAR Cup champion:

NASCAR: Tony Stewart wants to improve consistency (01/2012): Stewart-Haas Racing won the Cup Championship, but by no means have they stood pat in the this offseason.

Tony Stewart's bad boy days behind him (05/2011): By Jenna Fryer Associated Press CHARLOTTE — After a bad day not too long ago, one of Tony Stewart’s team members witnessed an outburst he ...

Tony Stewart enjoys a new lifestyle (01/2011): Stewart, who spent nearly a month racing in Australia, was back in the spotlight Monday during the NASCAR Sprint Media Tour.