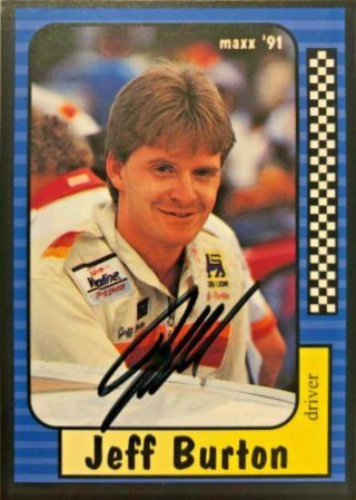 Jeffrey Tyler Burton (born June 29, 1967), nicknamed The Mayor, is an American former professional stock car racing driver and current racing commentator. He scored 21 career victories in the NASCAR Cup Series, including two Coca-Cola 600s in 1999 and 2001 and the 1999 Southern 500. He currently serves as a color commentator for NBC Sports, having joined them upon their return to their coverage of NASCAR. His son Harrison competes in the NASCAR Cup Series and nephew Jeb Burton currently competes in the NASCAR Xfinity Series, while his brother Ward Burton has also raced in the Cup Series. More about Jeff Burton

Current items with a signature of Jeff Burton

These are the most current items with a signature of Jeff Burton that were listed on eBay and on other online stores - click here for more items.

Traded items with a signature of Jeff Burton

Most recently, these items with a signature of Jeff Burton were sold on eBay - click here for more items.

Jeff Burton gives No. 14 team solid finish amid controversy (08/25/14): After a rough few weeks both on and off the track, veteran Jeff Burton gave Tony Stewart's No. 14 team a solid top-15 finish Saturday night at Bristol Motor Speedway.

Stewart-Haas Racing going forward with Jeff Burton behind the wheel for now (08/15/14): NASCAR driver Tony Stewart is grieving and decided to not compete in this weekend's Sprint Cup series race at Michigan International Speedway, according to Stewart-Haas Racing team officials.

VCU suspends Briante Weber, Jeff Burton in for Stewart at Michigan (08/15/14): Runas leads after first round of Eagle Classic, Squirrels lose at Portland

Tony Stewart's Future Unknown; Jeff Burton Will Fill In Sunday (08/15/14): Tony Stewart's plans for the remainder of NASCAR schedule are to be determined, but veteran Jeff Burton is subbing for his good friend Sunday at Michigan International Speedway.

Welcome back, Mayor: Jeff Burton begins '14 slate with new team (03/2014): The driver nicknamed 'The Mayor' for his ability to articulate complex ideas and viewpoints on many topics related to NASCAR, has returned to the garage and is ready to make his official debut in Vegas.

Jeff Burton Joins NBC Sports Group as NASCAR Analyst (12/2013): The addition of Burton places one of the most respected and passionate voices in motorsports into the center of NBC's soon-to-be-introduced NASCAR broadcast team.

Jeff Burton On Improvements At Pocono (08/2013): Jeff Burton addressed the media on Friday morning and talked about racing in the NASCAR Sprint Cup series and then...

Is Jeff Burton dreaming, or can he really make the Chase?: Sprint Cup driver mak (07/2013): What is this newfound bravado we're seeing in NASCAR's Jeff Burton?

Kwikset® And Jeff Burton Give One Lucky Fan A VIP Experience With Richard Childr (06/2013): LAKE FOREST, Calif., June 21, 2013 /PRNewswire/ -- As social engagement continues to grow in popularity among consumers, brand loyalists and motorsports fans, Kwikset is leveraging its sponsorship of NASCAR ...

The 29 machine passed Jeff Burton with 1 lap to go in the Toyota Owners 400 Satu (04/2013): Kevin Harvick won Saturday night's race at Richmond International Raceway by plowing through traffic on a two-lap sprint to the finish.

Jeff Burton to drive Cheerios car next season (10/2012): General Mills' iconic Cheerios brand will be returning to the track in 2013 in partnership with

Jeff Burton: Drivers losing respect for each other (08/2011): Lack of on-track etiquette causing tempers to flare

Slow start to Sprint Cup season doesn't stop Jeff Burton (03/2011): Jeff Burton is confident he still can make the Chase for the Sprint Cup. He just isn't sure which of two avenues, clawing into the top 10 in ...

No personality in Cup racing? Jeff Burton disagrees (02/2011): Jeff Burton says he doesn't want to be the voice of the Sprint Cup garage, but what he has to say nevertheless is worth heeding. Burton takes issue with those who say NASCAR racing has no personality.

Jeff Burton focuses on finding consistency (01/2011): It would be unfair to call Jeff Burton’s 2010 season a failure by any means.