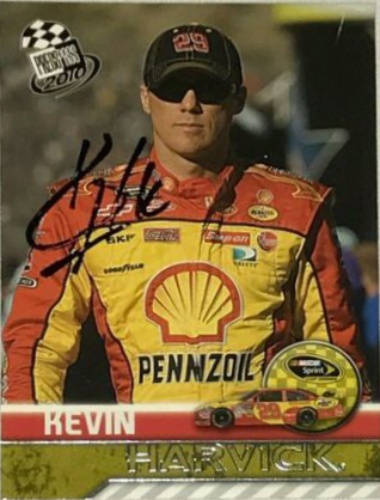 Current items with a signature of Kevin Harvick

These are the most current items with a signature of Kevin Harvick that were listed on eBay and on other online stores - click here for more items.

Traded items with a signature of Kevin Harvick

Most recently, these items with a signature of Kevin Harvick were sold on eBay - click here for more items.

Harvick will leave incomparable legacy that goes beyond rookie year (01/12/23): As a rookie, Kevin Harvick had the unenviable task of replacing the late Dale Earnhardt. Eventually, he became a NASCAR legend in his own right.

Harvick wins NASCAR's return race at Darlington (05/18/20): Kevin Harvick led 159 of the 293 laps at Darlington Raceway for his 50th career victory on Sunday.

Harvick wins Texas from pole to claim finale spot (11/04/19): Kevin Harvick took one of the championship-contending spots at NASCAR's season finale in two weeks by winning the fall Cup race at Texas for the third year in a row.

Harvick sees off Larson for stage two win (02/2019): Kevin Harvick prevailed after a fierce battle with stage one winner Kyle Larson to take the win in stage 2 at the Folds of Honor QuikTrip 500.Harvick moved to the front during pitstops in the first stage break ahead of Larson, Kurt Busch, Ryan Blaney and Martin Truex, Jr.Aric Almirola, who ended sta

Kevin Harvick wants Rodney Childers to keep pushing the inspection limits (11/2018): Childers was suspended for the final two races of the season after Harvick's car failed inspection following his win at Texas.

Kevin Harvick wins season finale to capture first career Sprint Cup championship (01/2015): HOMESTEAD, Fla. — Kevin Harvick charged through the field, picking off car after car, passing two other title contenders on a series of restarts. As he aggressively chased the victory and his first Sprint Cup title, it was clear that […]

31 Moments: No. 6 -- Kevin Harvick's walk-off win in Phoenix (12/2014): Editor's note: For the month of December, FOXSports.com will count down 31 moments that defined the 2014 NASCAR Sprint Cup Series season. No. 6 is Kevin Harvick's big win at Phoenix International Raceway.

Pressure' on Kevin Harvick to win this week's Sprint Cup race (10/2014): Kevin Harvick was one of those Chase for the NASCAR Sprint Cup Championship drivers you who you figured right out of the gate would be in the final four when it came down to the last race at Homestead Miami Speedway.

Kevin Harvick has Cup chance (09/2014): Kevin Harvick will start on the pole Sunday in the AAA 400 at Dover International Speedway in the No. 4 Stewart Haas Racing Chevrolet.

Kevin Harvick Nearly Hits Squirrel During Oral-B 500 (08/2014): During the Oral-B 500 in Atlanta, Kevin Harvick was in the lead when a squirrel suddenly scurried across the track ahead. Fortunately, the squirrel didn't get hit, but it obviously surprised Harvick when he was so focused on staying in front of the pack. [ Vine , h/t SB Nation ]

Sprint Cup regular Kevin Harvick, Chevrolet win Nationwide Series race at Kentuc (06/2014): A late-race pass on Kyle Busch on the final restart of the night awarded Kevin Harvick of JR Motorsports the win Friday night at Kentucky Speedway in the running of the John R. Elliott HERO Campaign 300 presented by Drive Sober or Get Pulled Over.

NASCAR Coca-Cola 600 more than just Jimmie Johnson vs. Kevin Harvick: Brad Kesel (05/2014): No doubt about it: A glance at the race report from

Hunt Brothers® Pizza To Serve As Primary Sponsor Of Kevin Harvick In NASCAR Spri (04/2014): NASHVILLE, Tenn., April 29, 2014 /PRNewswire/ -- Hunt Brothers ® Pizza will be the primary sponsor for Kevin Harvick and the No. 4 Stewart-Haas Racing (SHR) Chevrolet SS for the 30 th running of the NASCAR ...

Will Phoenix be a springboard to a Kevin Harvick NASCAR Sprint Cup title?: Drive (02/2014): With the Daytona 500 and all its pageantry now complete, the NASCAR

NASCAR brings hammer down on guy who threw hammer at Kevin Harvick (10/2013): Kevin Harvick got into a scuffle with Ty Dillon at last Saturday's race at Martinsville and it resulted with a member of Dillon's pit crew team throwing a hammer at Harvick's truck on pit road.

NASCAR: 12 Questions with Kevin Harvick (09/2013): Our series of NASCAR driver interviews continues this week with Kevin Harvick, the Richard Childress Racing driver who is currently sixth in the Chase for the Sprint Cup standings entering Sunday's race at Dover International Speedway.

Kevin Harvick leaving with a Bud (07/2013): Kevin Harvick was stuck in a rut after so many empty seasons chasing a championship with Richard Childress Racing.

USA TODAY: Why Donald Cerrone tapped NASCAR's Kevin Harvick for representation (06/2013): If UFC lightweight contender Donald "Cowboy" Cerrone's hunch is correct, a conversation that started over a cold beer might end up being responsible for a significant change in the sport of MMA.

Kevin Harvick, Champion®-Powered No. 29 Chevrolet Victorious at Richmond (04/2013): Southfield, Michigan, April 29, 2013.Kevin Harvick and the Champion ® spark plug-powered No. 29 Bell Helicopter Chevrolet SS drove through a pack of six cars off the final restart and pulled away to win ...

FOX8 Reality: Racing with Kevin Harvick (03/2013): NASCAR Stock Car Racing was born in North Carolina with roots in the Appalachian Mountain back roads. Today, many NASCAR...

Drivers, including Kevin Harvick and Tony Stewart, caught up in early Daytona cr (02/2013): Danica Patrick may have won the pole position for Sunday's Daytona 500 but based on their overall performances during Speedweeks, Tony Stewart and Kevin Harvick were considered the favorites.

Kevin Harvick tries to get Childress team back on track (09/2012): Driver of the No. 29 Chevrolet trails points leader Jimmie Johnson by 31 going into Dover.

Kevin Harvick gets new-but-old crew chief for Chase (08/2012): Gil Martin has been returned to the position he held from 2009 to 2011 at Richard Childress Racing.

NASCAR drivers Greg Biffle, Kevin Harvick clash at practice | Auto racing (10/2011): Greg Biffle of Vancouver, Wash., and Kevin Harvick had a run-in on the track when the NASCAR Sprint Cup Series got in its only practice after rain stopped. They had words as the confrontation later spilled over into the garage area.

Kevin Harvick optimistic despite 0-for-38 mark at Dover (09/2011): In 38 starts between the Sprint Cup, Nationwide and Camping World Truck series, Kevin Harvick has yet to record a NASCAR win at Dover.

Groller's Corner: Kevin Harvick gets an early win at Pocono (08/2011): Kevin Harvick got what figures to be a long day of racing here at Pocono off and running by winning the second annual Good Sam RV Emergency Road Service 125 in the NASCAR Camping World Truck Series.

MIS notes: Don't expect many fireworks even though Kyle Busch, Kevin Harvick are (06/2011): Kyle Busch and Kevin Harvick are officially out of NACAR's penalty box as the two saw their probation lifted this week for an altercation at Darlington Raceway on May 7.However, don't expect the sparks to fly any more than usual...

Kevin Harvick, team prove they "always have something left" (05/2011): Kevin Harvick proved again Sunday that he's one of the best closers in NASCAR, winning the Coca-Cola 600 on the final lap.

Tabb grad Kyle Turner is living his NASCAR dream on Kevin Harvick's crew (04/2011): Through most of his time at Tabb High, Kyle Turner had no interest in stock-car racing and, in fact, dissed his uncle for watching it. That changed in September 2002, when he attended the Sprint Cup race at Richmond International Raceway for his 18th birthday.

With Kevin Harvick's thrilling win at Auto Club Speedway, the question begs: Wha (03/2011): Let's say you have two choices. You can choose a snoozer race with a thrilling finish -- like Sunday's -- or a great race that fizzles at the end. So what do you really want?