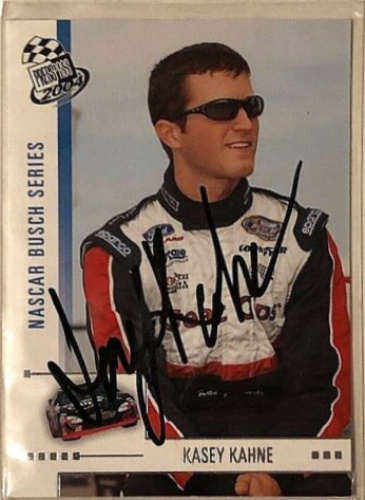 Current items with a signature of Kasey Kahne

These are the most current items with a signature of Kasey Kahne that were listed on eBay and on other online stores - click here for more items.

Traded items with a signature of Kasey Kahne

The most expensive item with a signature of Kasey Kahne (KASEY KAHNE #5 Custom KK EDITION ALPINESTARS RACING SHOES - AUTOGRAPHED by KASEY) was sold in January 2020 for $600.00 while the cheapest item (Kasey Kahne 07 Eclispe IP Autographed Card) found a new owner for $0.01 in November 2009. The month with the most items sold (28) was December 2012 with an average selling price of $1.12 for an autographed item of Kasey Kahne. Sold items reached their highest average selling price in October 2019 with $70.25 and the month that saw the lowest prices with $0.99 was December 2014. In average, an autographed item from Kasey Kahne is worth $4.99.

Most recently, these items with a signature of Kasey Kahne were sold on eBay - click here for more items.

Are Kasey Kahne, No. 5 team now the best of the Hendrick bunch? (03/17/15): Even though he won a race, made the Chase for the Sprint Cup and even advanced beyond the first Chase round, 2014 was a tough season for Kasey Kahne. The start of 2015 has been a much different story.

Why does Kasey Kahne already feel sense of desperation to get win? (02/27/15): Unlike his three Hendrick Motorsports teammates, Kasey Kahne took his eligibility for the Chase for the NASCAR Sprint Cup down to the wire last year.

Ancaster’s Ken Wayne and stars like Bening, Earnhardt Jr, Kasey Kahne and Andrea (01/02/15): Ancaster businessman and his wife, Pam, have added a couple more celebrities to a long list of Hollywood, sports and music legends they have met.

Kasey Kahne signs three-year extension with Hendrick (11/2014): Although it was announced Wednesday that the No. 5 Hendrick Motorsports Chevrolet will have a new crew chief in 2015, it doesn't appear the car will have a new driver anytime soon.

Kasey Kahne wins after late restarts (08/2014): Kasey Kahne's "downer" year received an important boost when he overcame his struggles with restarts with a big power move when he needed it the most.

NASCAR: Kasey Kahne on outside looking in with Chase, team for next year (07/2014): Fresh from his best performance this season, a vibe lingers that Kasey Kahne remains in the Sprint Cup crucible entering Sunday's GoBowling.com 400 at Pocono Raceway.

Bringing the heat: Kasey Kahne spends the day as a firefighter (05/2014): Kasey Kahne traded his steering wheel for a fire hose on Wednesday. The Hendrick Motorsports driver visited the New Hampshire Fire Academy to experience a day in the life of a firefighter.

Kasey Kahne back in Enumclaw classroom | NASCAR (03/2014): Enumclaw native Kasey Kahne, a veteran driver on the NASCAR circuit and member of his home town’s Walk of Fame, took a step back in time Thursday.

Quicken Loans 400: Kasey Kahne crashes while leading, finishes 38th (06/2013): Kahne had been among the fastest cars on the two-mile oval all weekend, and was considered the consensus favorite to win his second race of the year.

Kasey Kahne to appear at Berlin Raceway (05/2013): Berlin Raceway announced that NASCAR Star Kasey Kahne will be the official Grand Marshall of the Battle at Berlin 251 on June 15. In addition to being a part of the pre-race festivities, Kahne will also be signing autographs and holding private meet and greets with fans.

NASCAR: Kasey Kahne, Rickie Fowler exchange 'driving' tips on go-kart track (04/2013): Rickie Fowler has plenty of experience with drivers, but not the racing kind. Kasey Kahne is a driver, but isn't particularly good at hitting a golf ball with one.

NASCAR Hottie Kasey Kahne Spills on the Weirdest Thing He Ever Autographed (03/2013): If you think Twilight fans are a bit overzealous, you should try hanging around some NASCAR afficionados. Racing hottie Kasey Kahne says he once autographed—get ready for...

Hendrick's Kasey Kahne has ability, resources to contend for a Sprint Cup c (01/2013): He's not the favorite and shouldn't be considered among the leading contenders to win the championship. Instead, he says, call him an underdog.

Kasey Kahne keeps foot on gas as Chase hits Texas (10/2012): In first year with Hendrick, Kasey Kahne is still a bit of a contender.

Hendrick rookie Kasey Kahne shares info, gains speed (06/2012): After seeming a man without a country for much of his NASCAR career, the Enumclaw, Wash., native now is secure with the sport's superpower.

Auto racing roundup: Kasey Kahne captures his second pole of season (03/2012): Kasey Kahne is the first two-time pole winner of the season in NASCAR's Sprint Cup Series after he posted the fastest lap in qualifying Saturday at Martinsville Speedway. He'll start the race 27th in points, and hopes it's the start of a turnaround in fortune.

Kasey Kahne gets tough break in practice at Daytona (02/2012): Two spins produced one backup car on Wednesday. Brad Keselowski and Kasey Kahne got turned around during Sprint Cup practice sessions, but Kahne got the raw end of the deal.

NASCAR Newsmaker: Kasey Kahne (11/2011): Kasey Kahne knew a year ago his season with Red Bull Racing was temporary. But that didn't slow him down.

Kasey Kahne recovering from surgery (04/2011): Kasey Kahne had more knee surgery during the off week.

Kasey Kahne focused on Red Bull Racing, 2011 season (02/2011): Finally free from a tumultuous past but a year away from beginning what is predicted to be a fruitful future, Kasey Kahne sees the time being ...

Bruce Martin: Kasey Kahne, Brian Vickers back to top form after medical issues (01/2011): CHARLOTTE, N.C. -- After having one driver sidelined for open-heart surgery and its newest driver undergoing double-knee surgery in the offseason, Team Red Bull has had its share of health scares. In addition to a crew chief for each driver, maybe this team should add a medic to its ranks.

NASCAR: Kasey Kahne to drive #4 car for Red Bull (12/2010): Kahne drove the No. 9 car for Richard Petty Motorsports for all but the final five races of the Cup season