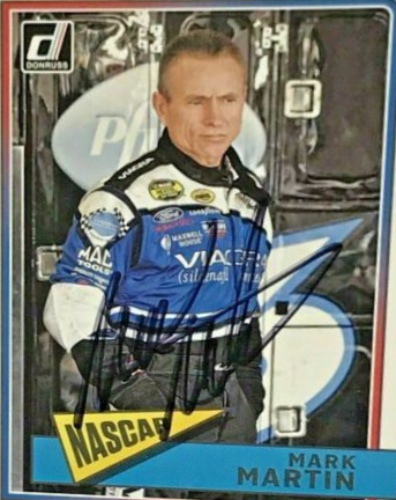 Mark Anthony Martin (born January 9, 1959) is a retired American stock car racing driver. He has the second most wins all time in what is now the Xfinity Series with 49. He scored 40 Cup Series wins. He finished second in the NASCAR Cup Series standings five times, third in the NASCAR Cup Series standings four times, and has been described by ESPN as "The best driver to never win a championship." Martin, with five IROC Championships, has more than any other driver. Also, during the 2005 season, Martin took over the all-time record for IROC wins, with 13. More about Mark Martin

Current items with a signature of Mark Martin

These are the most current items with a signature of Mark Martin that were listed on eBay and on other online stores - click here for more items.

Traded items with a signature of Mark Martin

Most recently, these items with a signature of Mark Martin were sold on eBay - click here for more items.

Off the mark, Martin Guptill scores first run for the Black Caps (03/28/15): Welcome to Dawn.com's live coverage of the ICC Cricket World Cup 2015 final between Australia and New Zealand.

4 pro fishing career tips from hall-of-famer Mark Martin (03/18/15): A Muskegon factory worker's success with a rod and reel has resulted in him receiving the crowning achievement of a professional fisherman.

Route Reversed to Honor NASCAR Legend Mark Martin for 2015 World's Shortest St. (02/2015): One of the oldest bits of humor about being a NASCAR driver is that "you just keep steering left" to negotiate the huge oval tracks on which the car racing events are held.

NASCAR's Mark Martin to Lead Hot Springs St. Patrick's Day Parade (11/2014): The Dallas Cowboys Cheerleaders will also be there for the event.

Mark Martin returns to Roush Fenway as driver development coach (07/2014): As a driver at Roush Fenway Racing from 1988-2006, Mark Martin won 83 races across NASCAR's national series and was the Sprint Cup Series' championship runner-up four times while helping the organization become one of the best in the sport.

Mark Martin treats Homestead as his final race (11/2013): HOMESTEAD, Fla. 8212 The greatest driver to never win a NASCAR championship treated the season finale as if it was the last race of his career.Mark Martin finished 19th Sunday in the Sprint Cup finale at Homestead-Miami Speedway.

Mark Martin preparing to get physical (09/2013): KANNAPOLIS, N.C., (Sept. 24, 2013) – Mark Martin is ready to get physical, but don’t expect him to wear a headband and legwarmers. The ultra-fit Martin will leave those to Olivia Newton-John. ... Keep reading

NASCAR great Mark Martin pilots winner on track, in air (07/2013): NASCAR driver Mark Martin backs his Citation CJ4 out of the hanger at Concord (N.C.) Regional Airport. "Don't let anyone ever try to justify the costs of owning a plane. ... But it sure is convenient," Martin says.

Mark Martin hopes to leave MIS a winner (06/2013): — Mark Martin has enjoyed more than his share of success at Michigan International Speedway and hopes to leave NASCAR's fastest track Sunday evening as the oldest driver to win a Sprint Cup race.

Mark Martin appreciates tips from Denny Hamlin (04/2013): Even at 54 Mark Martin is still learning to drive a stock car. He may be in his 16th year in NASCAR, but he admits he doesn't know everything - especially at iconic Martinsville Speedway.

Mark Martin -JGR deal falls through (03/2013): Mark Martin will replace Denny Hamlin in the Joe Gibbs Racing #11 for one race only, with Brian Vickers taking over the seat for the rest of Hamlin's absence.

Dustin Long: Mark Martin's third place at Daytona shows he still has years left (02/2013): The lines arch, dip and recline on Mark Martin's mug shot with the randomness of an abstract painter. The indentations meander -- each crease a memory, experience, or moment collected throughout his 54 years, including nearly 40 racing from local dirt tracks to the country's top speedways.

Mark Martin : Not Returning to No. 55 Toyota in 2014 (01/2013): Update: Martin said Tuesday he doesn't plan to drive the No. 55 Toyota after this season, ESPN.com reports. "My goal is to make this car one of the most wanted rides in NASCAR for 2014," Martin said. "I want to help [crew chief] Rodney Childers get there and see him race for a championship."

NASCAR still reviewing pit designs after Mark Martin crash at MIS (08/2012): No changes are planned for the first race on a high-speed oval since Mark Martin's violent collision with a pit wall at Michigan International Speedway, but NASCAR is reviewing tracks' pit designs.

MWR's Brian Vickers shares road with Mark Martin (07/2012): Brian Vickers is learning about Sprint Cup racing from the guy he ride-shares with on the track. Vickers...

Mark Martin looking to cash in with Kyle Busch's old ride (03/2012): Mark Martin, who was ninth last week at Phoenix, will drive for Joe Gibbs Racing for the first time this weekend in the Nationwide Series. / By Sam Sharpe, US Presswire

Mark Martin chasing elusive Daytona win with new team (01/2012): DAYTONA BEACH — The race track has teased him, tempted him to dream and mockingly taunted him to give it another try.

How about Mark Martin Motorplex? (08/2011): The Branson/Lakes Area Chamber of Commerce this week announced the number of tourists in Branson through the first six months of this year was down by 100,000 from last year and blamed heat as one of the reasons why.