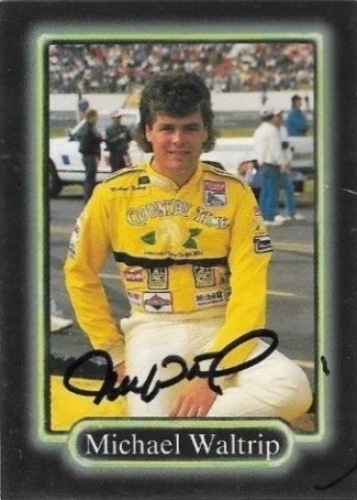 Michael Curtis Waltrip (born April 30, 1963) is an American former professional stock car racing driver, racing commentator, and published author. He competes full time in the Camping World Superstar Racing Experience. He is the younger brother of three-time NASCAR champion and racing commentator Darrell Waltrip. Waltrip is a two-time winner of the Daytona 500, having won the race in 2001 and 2003. He is also a pre-race analyst for the NASCAR Cup Series and color commentator for the Xfinity Series and the Camping World Truck Series broadcasts for Fox Sports. He last raced in the 2017 Daytona 500, driving the No. 15 Toyota Camry for Premium Motorsports. More about Michael Waltrip

Current items with a signature of Michael Waltrip

These are the most current items with a signature of Michael Waltrip that were listed on eBay and on other online stores - click here for more items.

Traded items with a signature of Michael Waltrip

The most expensive item with a signature of Michael Waltrip (MICHAEL WALTRIP RACE WORN SIGNED FIRE SUIT NASCAR DEI NAPA AUTO PARTS) was sold in July 2013 for $1599.00 while the cheapest item (MICHAEL WALTRIP HAND SIGNED ORIGINAL AUTOGRAPH NAPA DRIVERS CARD 1 CENT!!) found a new owner for $0.01 in July 2016. The month with the most items sold (22) was February 2011 with an average selling price of $3.71 for an autographed item of Michael Waltrip. Sold items reached their highest average selling price in May 2019 with $52.00 and the month that saw the lowest prices with $0.99 was March 2013. In average, an autographed item from Michael Waltrip is worth $3.34.

Most recently, these items with a signature of Michael Waltrip were sold on eBay - click here for more items.

Jeff Gordon to join Fox as full-time analyst in 2016 (05/21/15): He will replace Larry McReynolds, who will move to an in-race analyst role alongside Michael Waltrip and host Chris Myers. Eric Shanks, president of Fox Sports, believes adding Gordon to the booth gives viewers a perspective they haven't seen in some time.

Jeff Gordon to join FOX's NASCAR coverage in 2016 (05/21/15): Former crew chief Larry McReynolds, who currently works alongside Joy and Waltrip, will move to the on-site studio, known as the Hollywood Hotel, where he will be paired with Chris Myers and Michael Waltrip. "I will tell you that being up in the booth ...

Jeff Gordon joining Fox as full-time analyst in 2016 (05/21/15): Gordon is replacing Larry McReynolds, who will move to an in-race analyst role alongside Michael Waltrip and host Chris Myers. Gordon's first race in the booth will be in February at the Daytona 500. "The things that you see and are able to tell the fans ...

NASCAR: Jeff Gordon moves to TV booth in 2016 (05/21/15): Chris Myers hosts the network’s coverage alongside analysts Larry McReynolds and Michael Waltrip. Gordon’s multi-year contract begins this season with in-race reporting from the No. 24 Chevrolet during select Cup Series races, and segues to an analyst ...

Jeff Gordon to join Fox NASCAR full time in 2016 as analyst (05/21/15): Chris Myers will continue to host FOX Sports’ coverage alongside analysts Larry McReynolds (who leaves the booth for this role) and Michael Waltrip. “NASCAR has provided me so many incredible memories, experiences and opportunities throughout my 23 ...

NASCAR: Jeff Gordon moves to TV booth in 2016 (05/2015): Chris Myers hosts the network’s coverage alongside analysts Larry McReynolds and Michael Waltrip. Gordon’s multi-year contract begins this season with in-race reporting from the No. 24 Chevrolet during select Cup Series races, and segues to an analyst ...

For Michael Waltrip, victory in Kentucky as Sprint Cup car owner 'would be very (06/2014): For the third time in four years, there will be no Kentucky-born driver in the Sprint Cup Quaker State 400. But cars from Michael Waltrip Racing, the team co-owned by Owensboro native Waltrip, have historically performed well in Sparta.

MICHAEL WALTRIP RACING: Hard work pays off for Bisson (03/2014): It is unlikely you will find former Patrick Henry Community College (PHCC) motorsports program student Joseph Bisson at a racetrack with his hands in his pockets.

Clint Bowyer and Michael Waltrip Racing ready to shine in Phoenix (02/2014): CORNELIUS, N.C. — A visit to Phoenix International Raceway located in the “Valley of the Sun” presents the perfect opportunity for Clint Bowyer and the No.15 5-hour ENERGY Toyota to shine this weekend. ... Keep reading

Michael Waltrip Racing is at a crossroads -- What's next? (12/2013): Still operating under the shadow of the Richmond controversy, MWR hopes to make the best of what will be a challenging 2014. The addition of Jeff Burton should help Clint Bowyer and the company as a whole.

NASCAR: 5-Hour Energy staying with Michael Waltrip Racing (09/2013): Sponsor 5-hour Energy announced Friday morning it will stay with MWR and driver Clint Bowyer in 2014 after previously saying it would evaluate its relationship after the season.

Sarah Palin angered by Michael Waltrip comment (03/2013): Protests at the state capitol got downright intense Tuesday. Up to 600,000 tax returns filed by H&R Block could be delayed by up to six ...

Michael Waltrip Racing partners with SPARC racing and test facility (12/2012): By now it should be apparent that any expectations of objectivity in comparing crappy old ...

Michael Waltrip Racing beats the odds to succeed (06/2012): Every time Michael Waltrip has faced the very real possibility of closing his race shop, he's found a way - sometimes against his own best wisdom - to forge ahead.

Michael Waltrip Crash: Daytona 500 Streak Of NASCAR Driver Ends At 25 (02/2012): DAYTONA BEACH, Fla. -- Michael Waltrip sat in a golf cart just outside the care center, stared at the ground and sheepishly placed both hands on his head.

Michael Waltrip headlines racing weekend at Montana Raceway Park (08/2011): It's a big weekend for racing in the Flathead, and they waved the green flag Friday afternoon. Kalispell residents got to rub elbows with NASCAR royalty at a local car dealership.

Michael Waltrip, teammates learn the lessons of Le Mans (06/2011): Editor's note: Two-time Daytona 500 winner Michael Waltrip will be documenting his debut in the 24 Hours of Le Mans in a diary for USA TODAY ...

Nascar Star Michael Waltrip Adds Stand-Up Comedy To Resume (03/2011): Want to make Michael Waltrip nervous? Forget about blocking and crowding in the third turn. Check out his Vegas showroom debut instead. "I'm pretty comfortable in a car to know what I'm doing, and I'm exactly the opposite onstage," says Waltrip, whose

Michael Waltrip planning to drive in Kentucky's new Cup race (12/2010): It looks as if Kentucky will have a Kentuckian to root for when NASCAR Sprint Cup racing comes to Ke