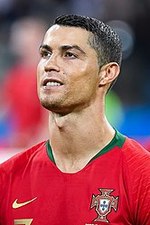 Cristiano Ronaldo dos Santos Aveiro GOIH ComM (born 5 February 1985) is a Portuguese professional footballer who plays as a forward for Premier League club Manchester United and captains the Portugal national team. Often considered the best player in the world and widely regarded as one of the greatest players of all time, Ronaldo has won five Ballon d'Or awards and four European Golden Shoes, the most by a European player. He has won 32 trophies in his career, including seven league titles, five UEFA Champions Leagues, and the UEFA European Championship. Ronaldo holds the records for most appearances (183), goals (140), and assists (42) in the Champions League, goals in the European Championship (14), international goals (117), and international appearances by a European (189). He is one of the few players to have made over 1,100 professional career appearances, and has scored over 800 official senior career goals for club and country. More about Cristiano Ronaldo

Current items with a signature of Cristiano Ronaldo

These are the most current items with a signature of Cristiano Ronaldo that were listed on eBay and on other online stores - click here for more items.

Traded items with a signature of Cristiano Ronaldo

The most expensive item with a signature of Cristiano Ronaldo (2018 Eminence Soccer CRISTIANO RONALDO Signature Salutes #9/10) was sold in September 2021 for $14000.00 while the cheapest item (LIONEL ( LEO ) MESSI and CRISTIANO RONALDO - 2 SIGNED 5x7in PHOTO REPRINTS) found a new owner for $0.77 in February 2022. The month with the most items sold (60) was June 2021 with an average selling price of $27.48 for an autographed item of Cristiano Ronaldo. Sold items reached their highest average selling price in August 2018 with $698.00 and the month that saw the lowest prices with $2.75 was October 2016. In average, an autographed item from Cristiano Ronaldo is worth $149.00.

Most recently, these items with a signature of Cristiano Ronaldo were sold on eBay - click here for more items.

PSG vs. Riyadh All-Star XI score: How Lionel Messi and Cristiano Ronaldo's poten (01/19/23): Both superstars and Mbappe were on target in Riyadh as Neymar missed a penalty and Bernat saw red

Lionel Messi vs. Cristiano Ronaldo: Fan pays $2.6 million for VIP ticket to watc (01/19/23): The fan will get to meet Ronaldo and Messi thanks to the pricey ticket

This might be the last time we see Lionel Messi vs. Cristiano Ronaldo; plus, Mil (01/18/23): Welcome to Wednesday's edition of the Golazo Starting XI newsletter

PSG vs. Riyadh All-Star XI live stream: How to watch Lionel Messi vs. Cristiano (01/18/23): These two old foes face off in Saudi Arabia for possibly the final time

Cristiano Ronaldo unveiled at Saudi Pro League club Al Nassr: 'I gave my word to (01/04/23): The 37-year-old Portuguese star said he turned down many clubs before coming to Saudi Arabia

Cristiano Ronaldo marks his return to Manchester United with a goal in dominant (10/2022): The Portuguese superstar was suspended for the last game but delivered in this one

Cristiano Ronaldo will not play for Manchester United against Liverpool after ba (04/2022): Ronaldo announced the death of his son on Monday

Cristiano Ronaldo's fading greatness takes center stage in Manchester United's C (03/2022): No shots, no touches in the box and no more Champions League for Ronaldo

Dušan Vlahović to Juventus announced: Serbian striker will wear No. 7 shirt vaca (01/2022): Juventus finally reached an agreement on Thursday and was announced on Friday

Manchester United's interim manager says incoming boss Ralf Rangnick did not hav (11/2021): Cristiano Ronaldo was not part of the starting lineup in United's 1-1 draw at Chelsea on Sunday

Cristiano Ronaldo's goals for Manchester United don't make up for the defensive (10/2021): Ole Gunnar Solskjaer has not seemed up to the task of adapting his team to Ronaldo's defensive shortcomings

WATCH: Aston Villa goalkeeper Emiliano Martinez gets in Bruno Fernandes' head be (09/2021): He's done it again, Martinez psyched out Bruno Fernandes jawing with him and Cristiano Ronaldo in United's loss

Here We Go: The inside story of Cristiano Ronaldo's shock return to Manchester U (08/2021): How one of the biggest deals in the history of the sport came together in less than 24 hours

Cristiano Ronaldo benched in Juventus' must-win Serie A game vs. Bologna (05/2021): Juventus entered the season's final day on the outside of Champions League qualification

Porto vs. Juventus player ratings: Cristiano Ronaldo goes quiet as Juve's defens (02/2021): It was not a night to remember for Ronaldo and Juventus

Cristiano Ronaldo being investigated for breaking COVID-19 travel protocols in I (01/2021): Ronaldo allegedly traveled to celebrate his girlfriend's birthday

Cristiano Ronaldo reveals soccer is not his favorite sport to watch (12/2020): 'Between watching a football match or a boxing or UFC fight, I choose boxing or UFC,' he said

Usain Bolt believes Cristiano Ronaldo is 'definitely' currently faster than him (11/2020): Bolt retired from track and field in 2017

Cristiano Ronaldo gets negative COVID-19 test, cleared to rejoin Juventus (10/2020): Ronaldo returns to play after isolating for two-weeks after testing positive for COVID-19

Ballon d'Or award canceled for 2020 due to COVID-19; who could've dethroned Lion (07/2020): There were three clear contenders with one well above the rest

Cristiano Ronaldo set to return to Juventus ahead of potential Serie A return, r (05/2020): Ronaldo spent his quarantine in Portugal

Cristiano Ronaldo, Juventus teammates give up $100 million to help club during c (03/2020): Players have agreed to reduced salaries for March through June

Cristiano Ronaldo, in giant paper-mache form, takes over Carnival of Viareggio i (02/2020): It's pretty safe to say Ronaldo has a 'larger-than-life' presence in Italy

Juventus star Cristiano Ronaldo scores first career Serie A hat trick to kick of (01/2020): It was the 10th competition in which Ronaldo has scored a hat trick

Ronaldo scores soaring header as Juventus beats Samp 2-1 (12/2019): Cristiano Ronaldo’s scoring streak continues as the Juventus forward netted an astonishing winner to help his side to a 2-1 victory at Sampdoria and back to the top of Serie A

Juve's Sarri says there is no disagreement with Cristiano Ronaldo (11/2019): SHOWS: TURIN, ITALY (NOVEMBER 25, 2019) (REUTERS - ACCESS ALL) 1. (SOUNDBITE) (Italian) JUVENTUS COACH, MAURIZIO SARRI, SAYING: "I don't know... I have a good relationship with Cristiano (Ronaldo). If a player is angry about being substituted, I share Simeone'

I like to play hockey the way David Beckham, Cristiano Ronaldo do in football: M (12/2018): It s for this season he picked the centre half position rather than a striker

Cristiano Ronaldo withdraws CR7 footwear range after Nike issue ultimatum (02/2015): The Portugal ace was given an ultimatum by Nike - drop your footwear brand or risk losing your contract.

Cristiano Ronaldo in dodgy Japanese advert (12/2014): Cristiano Ronaldo has done some dubious advertisements in his time. But this one for a Japanese device designed to keep your face fit might just take the cake.

Cristiano Ronaldo Beats Messi With Facebook Posts Worth $147,750 (11/2014): Cristiano Ronaldo snatched the last world soccer player of the year title from Barcelona's Lionel Messi , and the Real Madrid forward is winning the competition to be the sport's top endorser on Facebook ...

Cristiano Ronaldo wouldn’t have won La Liga Player of the Year had the voting be (10/2014): Javier Tebas does not want the voting for the La Liga awards to be made public.

Cristiano Ronaldo declared 'Fittest Man Alive' and it's hard to disagree (07/2014): Abs on abs on abs.

Cristiano Ronaldo: Real Madrid will show we're the best in Europe (04/2014): The Portuguese attacker was over the moon with his side's demolition of Bayern Munich and is determined to win the final to show the world Los Blancos' true quality

Which rule in football would Cristiano Ronaldo change? It would certainly lead t (12/2013): Cristiano Ronaldo has proposed a rule change that could see the Real Madrid and Portugal star sending even more shots straight into the top corner...

Cristiano Ronaldo has upstaged Messi (11/2013): August 12, 2003. Manchester United take the field for the first time after one of its most iconic superstars, David Beckham, has departed the club for Real Madrid. His legendary number 7 jersey has been given to an 18-year-old boy from Lisbon. After ...

Diego Lopez: It's hard to define Cristiano Ronaldo's quality (09/2013): The Spaniard believes that the Portuguese star's new contract was a massive boost to everyone associated with Real Madrid and is looking forward to a fierce derby with Atletico

Meet Erik Lamela - Tottenham's priority signing and the Argentine Cristiano Rona (08/2013): The 21-year-old is the closest prospect to the Real Madrid superstar and has flourished at Roma, easily justifying the £25 million price tag that Spurs have paid up front

Cristiano Ronaldo throws out first pitch at Dodgers game, hilarity ensues (07/2013): Cristiano Ronaldo is a world-class athlete and one of the best soccer players on Earth (unless Derrick Rose thinks he’s the best at that, too). But that doesn’t mean the man can throw a baseball.

Cristiano Ronaldo becomes ambassador for Mangrove Care Forum Bali (06/2013): The world football superstar was in Bali over the weekend to support efforts to educate and raise public awareness of the importance of protecting mangrove forests

Cristiano Ronaldo not the only one who missed chances, says Xabi Alonso (04/2013): The influential midfielder refuses to hold the Portugal international responsible for Madrid's semi-final exit against Borussia Dortmund

Cristiano Ronaldo New nike CR Mercurial Vapor IX boots (03/2013): Cristiano Ronaldo might have displayed his love for Manchester United when dumping his old side out of the Champions league with Real Madrid, but his new boots reveal he might not have been so loved-up if Sir Alex Ferguson's side had triumphed.

Cristiano Ronaldo could return to Manchester United (02/2013): As Manchester United prepare for Ronaldo’s first return since an £80million move to Madrid almost four years ago, the intriguing prospect of a more permanent return for the Portugal forward is on the agenda.

Irina Shayk helps Cristiano Ronaldo forget football worries with PDA (09/2012): London, Sept 28, (ANI): Cristiano Ronaldo, who has voiced his unhappiness with his current team Real Madrid, was seen enjoying a passionate PDA in the stands with girlfriend Irina Shayk, while the footie ace's team was in action in Madrid.

Cristiano Ronaldo is a great human player but Messi is a Martian, claims Basile (07/2012): While he acknowledged the Real Madrid ace's footballing ability, the veteran trainer described his compatriot as from another planet, and thus cannot be compared to his peers

Euro 2012 Hotties: Is Cristiano Ronaldo The Sexiest Soccer Player? (06/2012): Portuguese forward Cristiano Ronaldo celebrates at the end of the Euro 2012 football championships match Portugal vs. Netherlands, on June 17, 2012 at the Metalist stadium in Kharkiv.

Oh Look, Cristiano Ronaldo With A Dolphin (12/2011): Soccer superstar and amateur zoologist Cristiano Ronaldo hung out with a dolphin in the Dubai two days ago. "Today I had a great experience swimming with dolphins.

Real Madrid's Cristiano Ronaldo: I scored three goals because of my teammates (08/2011): The Portuguese attacker signaled that his hat trick was the work of the entire team, while saying that Kaka remains a vital piece of the squad after the convincing victory.

Former Santos coach Dorival Junior says Neymar is 'superior' to Real Madrid's Cr (06/2011): The young Brazilian has all the qualities to surpass Lionel Messi in the future, according to his former coach

Real Madrid fitness coach: Cristiano Ronaldo can play until he's 38 (05/2011): The La Liga giants' fitness coach believes the Portuguese attacker can continue at the top level for many years due to his superior fitness levels