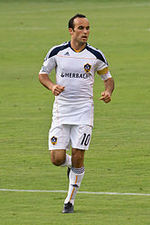 Landon Timothy Donovan (born March 4, 1982) is an American retired professional soccer player who is currently the manager of USL Championship side San Diego Loyal SC. A former forward, he holds numerous individual records in Major League Soccer (MLS) and for the United States national team and is regarded as one of the greatest U.S. men's soccer players of all time. More about Landon Donovan

The most expensive item with a signature of Landon Donovan (LANDON DONOVAN Signed Team USA Home Jersey UDA LE 10/50) was sold on eBay in March 2013 for $1195.00 while the cheapest item (Landon Donovan Signed Portrait, LA Galaxy and LA Dodgers) found a new owner for $0.99 in October 2017. The month with the most items sold (33) was June 2010 with an average selling price of $74.99 for an autographed item of Landon Donovan. Sold items reached their highest average selling price in January 2017 with $500.00 and the month that saw the lowest prices with $1.99 was February 2018. In average, an autographed item from Landon Donovan is worth $56.27.

Current items with a signature of Landon Donovan

These are the most current items with a signature of Landon Donovan that were listed on eBay and on other online stores - click here for more items.

Traded items with a signature of Landon Donovan

Most recently, these items with a signature of Landon Donovan were sold on eBay - click here for more items.

Exclusive: Inside Donovan's decision to coach Loyal (11/14/19): What kind of manager will Landon Donovan be? Hear it from U.S. coaching great Bruce Arena, former teammates — and Donovan himself.

LA Galaxy's Jose Villarreal targets "next level" in 2015, starting with Landon D (01/2015): CARSON, Calif. – Jose Villarreal knows that 2015 could be a make-or-break year for him with the LA Galaxy, and he's aiming to take more responsibility with his hometown club after making just five first-team appearances late last year following an Aug. 1 return from a half-year loan to Cruz Azul.

Landon Donovan hitting his stride after liberating retirement announcement (08/2014): CARSON, Calif. - In the weeks that preceded Landon Donovan's announcement that he will retire at the end of the 2014 season; there were whispers about the forward's productivity.

Landon Donovan Admits He Rooted Against U.S. Team After Being Left Off World Cup (06/2014): Landon Donovan took his World Cup snub hard. Really hard. So hard, in fact, that after he was left off the U.S. team roster in late May, he briefly hoped they wouldn't do well without him.

Soccer Insider: Landon Donovan: ‘I thought I was in contention to be starting’ (05/2014): The U.S. star answers questions about not going to the World Cup and Juergen Klinsmann's decision.

World Cup: Are Graham Zusi, Landon Donovan competing for USMNT lineup spot? Some (01/2014): CARSON, Calif. – Graham Zusi has figured significantly for the US national team since Jurgen Klinsmann gave him his international debut at the close of 2012's January camp.

Everton consider bringing back Landon Donovan for THIRD loan spell (11/2013): Everton are pondering a move to bring Landon Donovan back for a third spell on loan. The United States international became a crowd favourite at Goodison Park when he arrived in January 2010 and cemented the bond he forged with another successful period in 2012.

A look back at the loan deal that brought Landon Donovan to MLS (10/2013): At the time, it felt like a big deal. Just how big, however, no one knew for sure. "You look back on it now, a dozen years later," says agent Richard Motzkin, "and yeah, it turned into everything you hoped it would be and more. But back then? We just hoped."

Timbers planning to see Landon Donovan on the field (09/2013): Galaxy star forward/midfielder has not played since Sept. 14 after suffering sprained right ankle.

Landon Donovan: The Greatest U.S. Soccer Player Of All Time? (07/2013): He has been a standout at the World Cup. He has been told he wasn't good enough for Bayern Munich's amateur reserve team. He has been an unrepentant human. He has been great.

Landon Donovan whips the US team into World Cup contenders - see video (06/2013): In the second round of Group C action, the Americans were down 2-0 to the underdog Slovenians, the smallest country by population in the tournament.

Landon Donovan Eager to Get Fit in Time for Real Salt Lake (04/2013): CARSON, Calif. - Landon Donovan enjoyed his strongest game of 2013 last Saturday in the LA Galaxy's 2-0 victory over Sporting Kansas City, tallying a goal and an assist in the win, but whether he will be able to duplicate his success this weekend against Real Salt Lake remains a question mark.

Landon Donovan Eyes Return to U.S. National Team (03/2013): The career leader in goal scoring for the United States is hoping to earn his way back onto the national team.

Landon Donovan really is in Cambodia (02/2013): Thanks to a couple tweets that surfaced this morning from the editor of Thmey Thmey Online News, we now know that LD was casually getting his pickup game on at an island just off the coast of Sihanoukville. Barefoot.

PST: Could be weird year for Landon Donovan (03/2012): Landon Donovan just might be in for a weird year ahead. Some of that is about injuries and advancing age. Bummer, I know. It hits everyone – the U.S. national team’s all-time leading scorer, and one of the most decorated MLS men in league history doesn’t get a pass.

Commentary: Clint Dempsey is US soccer's true No. 10, not Landon Donovan (02/2012): US soccer midfielder Clint Dempsey heads to goal during a May 29, 2010, game against Turkey. The US won, 2-1. When looking for the star of a soccer team during a game or practice, look no further than the player wearing the No. 10 shirt.

Star Surveillance: Keri Hilson, Landon Donovan at Aria; Sean Paul at The Bank (08/2011): Reggae pop superstar Sean Paul presented a high-energy performance at The Bank at the Bellagio, plus paid an unexpected visit to Haze at ...

U.S. midfielder Landon Donovan is acting like a true professional despite coming (06/2011): The U.S. midfielder could have complained after coach Bob Bradley made him a bench player, but he's kept his mouth shut and produced on the field in a reserve role.

Landon Donovan's penalty lifts Galaxy past Dynamo (05/2011): CARSON, California - Landon Donovan scored from a penalty to start the second half as the Los Angeles Galaxy beat...

Of knees and needs and Landon Donovan (04/2011): One bad tackle, one wrong step, and an athletic career can be cruelly curtailed.

Landon Donovan and Clint Dempsey appeased by USA effort despite loss to Paraguay (03/2011): The two stars hail effort in defeat.

Footballers On Twitter Today: I Am Watching American Idol - LA Galaxy's Landon D (02/2011): Goal.com rounds up some of the interesting things that are being said on Twitter.

USA's Landon Donovan Unsure About Return To National Team Action (01/2011): Though Landon Donovan has described his eagerness to return to club play after a holiday break following 18 months of nearly non-stop soccer, it may be that national team games are a different story.

The story behind the Landon Donovan image (12/2010): In honor of MLSsoccer.com's Moment of the Year, new media editor Nick Fichau spoke with Getty photographer Kevork Djansezian, who snapped the image above and those below of Landon Donovan 's goal against Algeria, all of which became some of the most iconic images in US Soccer history.