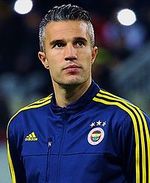 Robin van Persie (born 6 August 1983) is a Dutch former professional footballer who played as a forward. He is regarded as one of the best strikers of his generation. He is the record goal scorer of all time for the Netherlands national team. More about Van Persie

Current items with a signature of Van Persie

These are the most current items with a signature of Van Persie that were listed on eBay and on other online stores - click here for more items.

Traded items with a signature of Van Persie

Most recently, these items with a signature of Van Persie were sold on eBay - click here for more items.

Netherlands - Turkey Betting: Goals look likely despite the absence of Robben an (03/26/15): Neither side has been in inspired form during their Euro 2016 qualifying campaign yet the goals have been flying in and Phil Kitromilides is backing another high scoring encounter

Van Persie targets comeback against Man City (03/21/15): The Manchester United striker has been out of action since damaging ankle ligaments in February's defeat at Swansea City. Van Persie's rehabilitation efforts have thus far centred on fitness and gym work but he will begin training outdoors again at the start of the week.

Van Persie targets Manchester derby comeback (03/21/15): The Netherlands striker has been out of action since the end of February with an ankle ligament injury but hopes to return in April for the Old Trafford encounter

Van Persie absent for Sunderland clash (02/27/15): Robin van Persie is out for Manchester United's clash with Sunderland, but Michael Carrick is nearing a comeback for Louis van Gaal's side.

Van Persie set for long spell out (02/2015): Manchester United striker Robin van Persie is set for a lengthy lay-off because of an ankle injury, manager Louis van Gaal has revealed.

Van Persie in the dark over long-term future at Man United (01/2015): Robin van Persie says he has no idea if he will be offered a new contract at Manchester United.

Van Persie ends barren run as United breeze past Hull (11/2014): Robin van Persie got back on the scoresheet after a disappointing run as Manchester United strolled to a 3-0 victory over Hull at Old Trafford on Saturday.

Van Persie happy with Manchester United progress (10/2014): The Dutchman - who hammered home an injury-time equaliser against Chelsea on Sunday - believes the Red Devils' performance shows they can match the very best

Van Persie: We need to push on (09/2014): Manchester United striker Robin van Persie has urged his team to use Saturday's win over West Ham as a springboard for a charge up the table.

Van Persie will be next Manchester United captain - Bryan Robson (07/2014): The Red Devils legend believes the former Ajax boss will give his countryman the armband ahead of Wayne Rooney, in the wake of Nemanja Vidic's departure this summer

Van Persie back for Dutch to terrorize Mexico (06/2014): MEXICO are largely injury free and were impressive in the group stage. (Reuters) NETHERLANDS' rich vein of form makes them favorites. (AP)

Van Persie: I'd walk on fire for Van Gaal (05/2014): The striker admits that he owes new Manchester United boss for making him captain of the Dutch national side and says that Netherlands will "do something special" at the World Cup

Injured Van Persie likely out six weeks (03/2014): Manchester United’s Robin van Persie will miss up to six weeks with a left knee injury, ruling the Netherlands striker out of both legs of a... Read more ...

Mata, Rooney & Van Persie will be best front three in England - Moyes (01/2014): The manager believes their ability to switch positions makes them a danger for defences, while also admitting he is taking advice from Van Persie over the striker's fitness

Van Persie ruled out of Tottenham clash with Rooney a doubt (12/2013): The Netherlands international has been sidelined since December 10 with a thigh injury, while the England striker did not train on Tuesday due to a groin problem

United don't miss Van Persie, say Goal Singapore readers (11/2013): The Dutchman sat out the Red Devils' last two matches but team-mate Wayne Rooney has made up for it with some sensational form

Van Persie and Van Ginkel in Netherlands squad (08/2013): The Manchester United striker is expected to captain his country against Estonia and Andorra, while the Chelsea youngster, Michel Vorm and Ron Vlaar are also included

Pick Your Team: Van Persie, Iniesta & Kompany star in North America editor's XI (07/2013): Ahead of the Goal 50 on Monday July 29, our countdown continues with each of Goal's regional managing editors this week choosing their best world XIs from 2012-13

Ardiles: Higuain can be Arsenal's new Van Persie (06/2013): The former Tottenham player and manager believes the French-born striker could have as big an impact as the Dutchman had in his final few seasons at Emirates Stadium should he sign

Van Persie's performances merited Manchester United end-of-season award, says Va (05/2013): The Holland international was named the Fans' Player of the Year but missed out on the Players' Player of the Season award to Michael Carrick, much to his countryman's dismay

Van Persie insists he should be awarded goal in Sunderland victory (03/2013): The Dutchman saw a cross-cum-shot diverted into the back of the net by Titus Bramble as the Red Devils earned a 1-0 win to maintain their 15-point lead at the top of the league

Manchester United - Southampton Betting Preview: Robin van Persie can punish Sai (01/2013): The Netherlands international hit a hat-trick in this fixture earlier in the season, and Jamie Dickenson is backing the league leaders to win to nil and the striker to fire again

National Sport: Van Persie strike seals United win (12/2012): Robin van Persie's 17th goal of the season ensured Manchester United claimed yet another scalp on their march towards what they hope will be a 20th league title at Old Trafford, with a 2-0 win against West Brom.