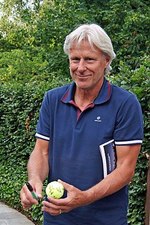 Björn Rune Borg (born 6 June 1956) is a Swedish former world No. 1 tennis player. Between 1974 and 1981, he became the first man in the Open Era to win 11 Grand Slam singles titles (six at the French Open and five consecutively at Wimbledon), but he never won the US Open despite four finals appearances. He is the first male player to win five Wimbledon titles in the Open Era, as well as the only Swedish tennis player, male or female, to win more than 10 grandslams. More about Bjorn Borg

Current items with a signature of Bjorn Borg

These are the most current items with a signature of Bjorn Borg that were listed on eBay and on other online stores - click here for more items.

Traded items with a signature of Bjorn Borg

The most expensive item with a signature of Bjorn Borg (George H.W. Bush Typed Letters Signed Archive - Playing Tennis With Bjorn Borg) was sold in December 2018 for $1000.00 while the cheapest item (Björn Borg Autograph Signed Photo 6x4 Tennis) found a new owner for $0.99 in November 2017. The month with the most items sold (16) was August 2020 with an average selling price of $17.39 for an autographed item of Bjorn Borg. Sold items reached their highest average selling price in August 2015 with $200.00 and the month that saw the lowest prices with $5.50 was July 2010. In average, an autographed item from Bjorn Borg is worth $26.51.

Most recently, these items with a signature of Bjorn Borg were sold on eBay - click here for more items.

Is Rafael Nadal's clay-court dominance over? Bjorn Borg could tell us (05/09/14): Congratulations! Your weather is set to . You can change the location at any time. Don't have an account?

Bjorn Borg AB: What is Sexy Underwear & Why do you Wear it? (07/2012): New International Survey Reveals Young People's Attitudes to Undies & SexSTOCKHOLM , July 17, 2012 /CNW/ - Bjorn Borg has conducted an international survey across Europe , USA and China to find out young ...

Your Morning Fashion and Beauty Report: Gwyneth Paltrow confers with Topshop top (06/2011): Peacocks, a British cheap-chic chain, plans to offer a low-budget version of the Duchess of Cambridge's wedding dress online in August -- for about $96 at current exchange rates. It's more "inspired by" the Sarah Burton original design than an...

Next time you feel your blood boiling, think of Bjorn Borg (04/2011): During my 20 years as a comprehensive school teacher, I witnessed both children and teachers losing the plot.