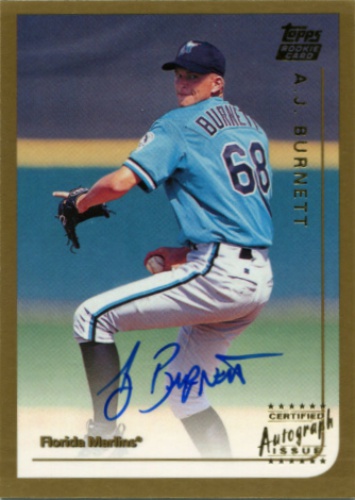 Current items with a signature of A.J. Burnett

These are the most current items with a signature of A.J. Burnett that were listed on eBay and on other online stores - click here for more items.

Traded items with a signature of A.J. Burnett

Most recently, these items with a signature of A.J. Burnett were sold on eBay - click here for more items.

Pirates' A.J. Burnett already thinking ahead to start of regular season next wee (04/02/15): TAMPA, Fla. — The Pirates headed north Thursday with their health relatively intact, two roster decisions remaining and a solid month and a half of preparation just about complete.

The cautionary tale of A.J. Burnett, and the cost of Yanks’ last title (03/30/15): A.J. Burnett looks at home in a Pirates uniform at McKechnie Field, dressing in a corner locker befitting his veteran status and riding his younger teammates (that would be all...

Ray Searage: A.J. Burnett Will Be Better With A Lighter Burden (03/11/15): Pirates pitching coach Ray Searage sat down with "The Fan Morning Show" at Spring Training in Bradenton this week to discuss getting his staff ready for the 2015 season.

A.J. Burnett: Leaving Pittsburgh Made It That Much Sweeter (03/10/15): Pirates pitcher A.J. Burnett sat down with "The Fan Morning Show" at Spring Training in Bradenton to talk about his second stint in Pittsburgh getting underway.

Pirates notebook: A.J. Burnett, freed of injury, feeling good in Pirates' spring (03/08/15): BRADENTON, Fla. — The Pirates’ bullpen at McKechnie field sits past the fence in right field, below an elevated boardwalk that allows fans a great view of pitchers warming up. A.J. Burnett felt their presence Saturday, the same way he felt the energy of playing in a Pirates uniform.

A.J. Burnett’s return to Pirates follows plan of his own making (12/2014): While the Pirates were losing to the San Francisco Giants in the National League wild-card game Oct. 1, A.J. Burnett watched from home. He turned to his wife, Karen, with a question.

A.J. Burnett leaves Phillies for one last shot with Pirates (11/2014): Veteran right-hander agrees to one-year, $8.5 million deal -- $4.25 million less than he would have gotten in Philadelphia

In search of pitching, Royals ask about A.J. Burnett (07/2014): UPDATE: According to Royals beat writer Andy McCullough, the Royals are slowly backing away from Burnett, in fear of his 2015 option.

A.J. Burnett stands in way of Jays' 5th straight win (05/2014): The Blue Jays will need to disrupt A.J. Burnett's rhythm Thursday night in Toronto if a fifth consecutive victory and a four-game sweep over the Philadelphia Phillies is in order.

A.J. Burnett pitches Philadelphia Phillies past Arizona Diamondback to end road (04/2014): Burnett picked up his first win of the year.

Mike Sielski: Phillies counting on A.J. Burnett to be a difference-maker (03/2014): SARASOTA, Fla. The tattoos that coat A.J. Burnetts arms, legs and torso leave so little unmarked skin exposed that its as though he actually has one amorphous, flesh-toned piece of art adorning his body.

A.J. Burnett is a well-needed addition to Phillies' starting rotation (02/2014): Signing A.J. Burnett doesn't guarantee a playoff spot for the Phillies, but it gives them a shot at one.

Who's at fault, A.J. Burnett or the Pirates? (01/2014): Still, it's mind-boggling to me that we haven't seen a large contingent of Pirates fans burning Burnett in effigy.

A.J. Burnett rumors: Right-hander still undecided about returning in 2014 (11/2013): Though Tuesday morning marked the official start of the free agency -- meaning clubs can start signing free agents at will -- the veteran right-hander appears no closer to a decision. Burnett's agent emailed the Tribune-Review saying little more than "A.J. remains undecided."

A.J. Burnett free agency: Pirates want pitcher back (10/2013): Burnett appeared on 93.7 FM's Colin Dunlap Show in Pittsburgh Monday and said that his decision is not whether he will sign with another team, but whether he will return to the Pirates or retire.

Pirates’ A.J. Burnett Dealing With Torn Calf Muscle (06/2013): A.J. Burnett is wearing a walking boot over his torn right calf and isn't sure when he'll be ready to return.

A . J . Burnett considering retirement after 2013 season (03/2013): Burnett, a 15-year veteran, is entering the final year of a five-year, $82.5 million contract originally signed as a member of the New York Yankees. The 36-year-old was 16-10 with a 3.51 ERA last season after the Pirates traded for him during last year’s spring training .

A.J. Burnett’s offseason training is going well (01/2013): He’s almost in midseason form: Back to back throws through window in garage. Somethings never change!!#itslipped! twitter.com/wudeydo34/stat… — AJ Burnett (@wudeydo34) January 25, 2013   Granted, this would be a lot funnier if he hadn’t just had a decent season.

HOUSTON -- A.J. Burnett allowed one run in eight innings for his 16th win, and J (09/2012): The win snapped a five-game skid for the Pirates, who at 75-77 are in danger of posting their 20th straight losing season, which would extend their major North American professional sports record.

Hey, Check Out What A.J. Burnett Did Last Night (05/2012): This looks familar. After bunting a foul ball off his face in spring training, former Yankees punching bag A.J. Burnett returned earlier than expected on April 21 and threw seven shutout innings in a 2–0 win over the Cardinals.

A.J. Burnett Wins in Pirates Debut (04/2012): The former Yankees pitcher threw seven scoreless inning in a 2-0 victory over the Cardinals.

A.J. Burnett and Five of the Most Bizarre Injuries In Sports (03/2012): Here are five of the strangest injuries suffered by athletes in recent years.

Baseball roundup: Pirates' A.J. Burnett hit in face by batted ball (02/2012): Pirates pitcher A.J. Burnett was struck in the face by a batted ball on Wednesday and will fly from the team's spring training complex to Pittsburgh to have his right eye examined by team doctors.

Bradley: Yankees hope to find A.J. Burnett a new home (01/2012): Whether they can deal the embattled pitcher is the question

Yankees’ Cashman: ‘If He’s With Us,’ A.J. Burnett In Rotation (11/2011): Yankees GM Brian Cashman said all the right things in a conference call following his new three-year deal. Then, regarding embattled starter A.J. Burnett, he slipped.

D'Alessandro: A.J. Burnett throws curve into Yankees' playoff rotation plans (09/2011): If you think back to July, there was no long-term scenario that struck one as promising

Yankees' A.J. Burnett must adjust with his job on the line (08/2011): Burnett says he won't let pressure get to him

A.J. Burnett strikes out four in sixth inning (06/2011): A.J. Burnett became the first New York Yankees pitcher to strike out four batters in one inning, tying a major league record against the Colorado Rockies in the sixth inning of the Yankees' 4-2 home loss last night.

Bronx Briefing: A.J. Burnett Bringing Consistency (05/2011): A.J. Burnett leads the Yankees with four wins, and in a season where the Yankees need him to be the pitcher they gave $82.5 million to, he's stepping up in a big way.