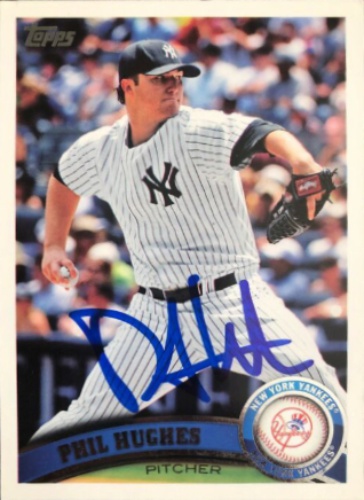 Philip Joseph Hughes (born June 24, 1986) is an American former professional baseball pitcher. He has played in Major League Baseball (MLB) for the New York Yankees, Minnesota Twins, and San Diego Padres from 2007 through 2018. He stands 6 feet 5 inches (1.96 m) tall and weighs 240 pounds (110 kg). He was the Yankees' first-round pick in the 2004 MLB draft. More about Phil Hughes

Current items with a signature of Phil Hughes

These are the most current items with a signature of Phil Hughes that were listed on eBay and on other online stores - click here for more items.

Traded items with a signature of Phil Hughes

The most expensive item with a signature of Phil Hughes (PHIL HUGHES signed NY YANKEES JERSEY auto STEINER MLB) was sold in October 2012 for $329.99 while the cheapest item (PHIL HUGHES AUTOGRAPHED MAGAZINE COVER NEW YORK YANKEES) found a new owner for $0.01 in July 2009. The month with the most items sold (53) was June 2010 with an average selling price of $13.49 for an autographed item of Phil Hughes. Sold items reached their highest average selling price in February 2008 with $60.50 and the month that saw the lowest prices with $0.99 was May 2019. In average, an autographed item from Phil Hughes is worth $18.00.

Most recently, these items with a signature of Phil Hughes were sold on eBay - click here for more items.

Phil Hughes' bat to be taken to Everest (04/11/15): Nepal's cricket association says a bat used by the late Phillip Hughes will be taken to Mount Everest.

Twins starter Phil Hughes bitten by two early cutters in loss to Tigers (04/06/15): DETROIT -- Phil Hughes has averaged better than 92 miles per hour on his fastball in each of the past three seasons.

Clarke dedicates World Cup to Phil Hughes - Sport - DAWN.COM (03/29/15): “This victory is dedicated to our little brother Phillip Hughes. Hughesy used to party as good as any of them so I guarantee we'll celebrate hard tonight.”

CAN wants to take Phil Hughes’ bat, kit to top of Everest (12/2014): Cricket Association of Nepal (CAN) Friday said it had drafted a proposal to take a bat and an item of clothing belonging to Australian cricketer Phil Hughes to the top of Mount Everest as a tribute to the late cricketer.

Tributes for Phil Hughes (11/2014): Good evening, People around the world and across Australia continue to celebrate the life of young cricketer Phil Hughes, Just over the mountains in his hometown of Macksville - tonight the whole community is grieving. Here in the New England

Will Phil Hughes finally get his chance? (10/2014): As many as five spots could be up for grabs after Australia's embarrassing loss to Pakistan, but will Darren Lehmann pull the trigger or keep his cool?

Phil Hughes Caught an Invisible Line Drive as Sal Perez Doubles Down the Line (07/2014): Throw a pitch, close your eyes and hope for the best.

Twins 5, Tigers 3: Phil Hughes takes a load off the rotation (04/2014): Phil Hughes gave the struggling Twins rotation exactly what it needed: a dose of excellence.

Phil Hughes stands against Blues at SCG (12/2013): Phil Hughes has reached lunch unbeaten on 37 as South Australia struggled to 3-88 in their first innings response to NSW's 373 at the SCG.

Yankees sound ready to dump Phil Hughes from rotation (08/2013): Phil Hughes hasn’t drawn any interest on the trade market and with free agency right around the corner it sounds like the Yankees are just about ready to dump him from the rotation. Hughes failed to make it out of the fifth inning yesterday against the Blue Jays, falling to 4-13 with a 4.91 ERA…

Phil Hughes remains composed, even as possibility of end of Yankee career nears (07/2013): News, notes, lineups and the weather forecast for Sunday's series finale against the Rays

The Ashes 2013: Australian team profiles, No 5 - Phil Hughes (06/2013): Analysis: In the fifth of his forensic series examining each member of the new-look Australian Test side, Scyld Berry profiles Phil Hughes - whose talent is exceptional, but not in the sense of outstandingly good.

Phil Hughes running out of time with Yankees, despite strong start (05/2013): Pitched seven inning, allowed one run against Mets

Keidel: It’s Time For Phil Hughes To Pitch Up To Snuff For The Yankees (03/2013): Aside from a brilliant half-season during an 18-8 2010, Hughes has been a huge disappointment. Now, nearing 27, with the sheen of youth scrubbed off and the "upside" banner quite tattered, it's time for Hughes to pitch up to snuff.

Phil Hughes hits half-ton against Vics. (01/2013): Phil Hughes' rich run-scoring has continued with a half-century for South Australia against Victoria.

Phil Hughes exorcises his Tasmanian devil (12/2012): Phillip Hughes returned to his house of horrors at Blundstone Arena and exorcised his demons but Australia's test fortunes again rest upon the shoulders of their elder statesmen.

Bittersweet pill for Phil Hughes (11/2012): RENAISSANCE man Phil Hughes believes he can fill any batting slot Australia requires but says it would be a melancholy duty replacing Ricky Ponting.

Phil Hughes leaves Test talk to his bat (10/2012): Opening batsman Phil Hughes is reluctant to discuss his burgeoning claims for a Test recall, preferring to let his runs do the talking.

Phil Hughes Q&A with Fangraphs (07/2012): Fangraphs published an interview with Phil Hughes today in which the Yankees’ right-hander and former top prospect discusses the evolution of his arsenal of pitches.

Phil Hughes gets a little help as Yankees top Indians (06/2012): NEW YORK — Phil Hughes came three outs away from a complete-game shutout on Tuesday, but of all his outs, the most memorable was the one that shouldn’t have counted.

Phil Hughes falters again as Yankees fall to Texas (04/2012): The back of the Yankees' rotation is in trouble, and the team's expected reinforcements can't help. Wednesday was undeniable proof that a spring abundance of starting pitching has been dangerously depleted.

Hartnett: The Time Is Now For Phil Hughes (03/2012): Phil Hughes has regained his velocity and forced his way into the Yankees rotation. 2012 could a be bounce-back season for the rejuvenated Hughes.

Tustin's Shawn Green, Phil Hughes part of special night (02/2012): Angels infielder Mark Trumbo says some of his best baseball memories were playing in high school at Villa Park. Trumbo and others in the baseball community want to make sure the opportunities continue for future generations. "The CIF championship at...

Yankees' Phil Hughes feeling better after epidural, targeting next week for retu (09/2011): Hughes: 'Hopefully I'll throw in a couple of days and be ready to make a start in Tampa.'

VIDEO: Yankees' Phil Hughes Dominates in Rehab Start in Trenton (06/2011): TRENTON — After what Phil Hughes did to them Wednesday afternoon, the New Hampshire Fisher Cats were probably longing for last September , when the best the Thunder had to offer was an aging left-hander named Pettitte.

What thoracic outlet syndrome could mean for Yankees pitcher Phil Hughes (04/2011): Some pitchers have bounced back from ailment. Some have not.

Yankees Q&A with pitcher Phil Hughes (02/2011): He talks about his obsession with hockey and his breakout 2010 season