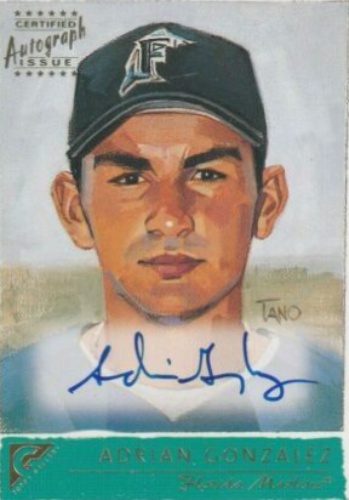 Current items with a signature of Adrian Gonzalez

These are the most current items with a signature of Adrian Gonzalez that were listed on eBay and on other online stores - click here for more items.

Traded items with a signature of Adrian Gonzalez

Most recently, these items with a signature of Adrian Gonzalez were sold on eBay - click here for more items.

Veteran first baseman Adrián González retires after 15-year MLB career, Olympics (02/05/22): González most recently appeared in the majors in 2018, but he remained active until last year

Former All-Star Adrian Gonzalez signs with Mexican League, aiming for spot on Me (03/31/21): Gonzalez turns 39-years-old this May

Dodgers try lefty bats this time against Bumgarner to no avail (05/21/15): Perhaps because the Dodgers hadn’t beaten MadBum in either of those games, manager Don Mattingly decided to keep left-handed sluggers Joc Pederson and Adrian Gonzalez the lineup. According to ESPN LA, Mattingly called Pederson’s reaction to being in ...

Third Times The Charm: Another Clayton Kershaw vs. Madison Bumgarner Fight (05/2015): 306 (11 for 36) average with a home run. Justin Turner is hitting .280 with two home runs in 26 plate appearances. Adrian Gonzalez is hitting just .114 against Bumgarner. I don’t care though, he better be in the lineup. Who am I kidding? I know he won ...

Dodgers' Adrian Gonzalez and Yasiel Puig look like a package deal (03/2015): With the Dodgers scheduled to break camp Wednesday, Adrian Gonzalez was among several veterans permitted to travel to Los Angeles a day early.

Dodgers' Adrian Gonzalez likes the changes made in off-season (01/2015): When Adrian Gonzalez led the major leagues in runs batted in last season, he was often hitting behind Hanley Ramirez and in front of Matt Kemp.

Dodgers Star Adrian Gonzalez -- Puig Puts Ketchup on Sushi ... For Real (12/2014): They say you shouldn't knock something 'til you try it ... but this sounds gross -- Yasiel Puig puts KETCHUP on his sushi. Ketchup. And raw fish. Together.  At least, that's what Puig's L..A Dodgers teammate Adrian Gonzalez told us last night…

Fanfare or no, Adrian Gonzalez keeps getting job done for Dodgers (08/2014): Adrian Gonzalez is not exactly what you would call media friendly. He can treat a softball baseball question like a deep inquiry to his personal life. He can be curt and off-putting and act like he cannot wait for the interview to be over.

Reaction to David Ortiz extension -- plus, how Adrian Gonzalez made Big Papi bet (03/2014): SARASOTA, Fla. -- If nothing else, let this be Adrian Gonzalez' legacy with the Red Sox: He helped extend David Ortiz' career.

Adrian Gonzalez to Deliver Ceremonial First Kick (01/2014): The San Diego Sockers are excited to welcome San Diego's own Adrian Gonzalez to Saturday's game against the Toros de Mexico. Kickoff between the Tijuana-based Toros and the Sockers on Mighty 1090 T-Shirt Night is set for 7:05, with Adrian delivering the ceremonial first kick.

Dodgers see a consistent Adrian Gonzalez in full L.A. bloom (08/2013): With the Red Sox in town, checked with FTD, and sure enough, no flowers were exchanged between Adrian Gonzalez and the Boston media. Did not observe a single sentimental reunion, one warm embrace, not a solitary love note exchanged.

Adrian Gonzalez says to vote for Yasiel Puig (07/2013): Both Gonzalez and Puig are eligible for the Final Vote, where the fans vote for the last roster spot on the All-Star team. The first baseman lended his full support to Puig, telling the media:

Adrian Gonzalez infection sends him to hospital for exam (04/2013): Dodger first baseman Adrian Gonzalez was scratched from the starting lineup because he was at the hospital getting a skin infection examined.

Why is Adrian Gonzalez 's father suing MLB? (03/2013): Los Angeles Dodgers base runner Adrian Gonzalez (23) runs the bases after hitting a home run in the first inning during a spring training game against the Milwaukee Brewers at Camelback Ranch.

Adrian Gonzalez Is ‘Really, Really Happy’ to Be With Dodgers, Says He’s in ‘Best (02/2013): Adrian Gonzalez has moved on from Boston, and it sounds like he couldn’t be any happier. The former Red Sox slugger is in the middle of his first spring training with the Los Angeles Dodgers after being sent to L.A. in a blockbuster trade last season, and he says he feels right at home. In [...]

Ex-Red Sox GM Theo Epstein likes Adrian Gonzalez trade for Boston (01/2013): That stunning blockbuster trade last August that brought Adrian Gonzalez and Josh Beckett to the Dodgers from the Red Sox remains a jaw-dropper, as it is still being scrutinized and figures to be for some time.

Dodgers’ Adrian Gonzalez And Wife Betsy To Hand Out Thousands Of Toys To Childre (12/2012): Adrian Gonzalez and his wife Betsy will hand thousands of toys to children at the East Los Angeles 12th annual winter wonderland holiday celebration, Saturday at 11a.m.

DODGERS NOTEBOOK: Adrian Gonzalez gets mixed reaction in San Diego return (09/2012): SAN DIEGO - Adrian Gonzalez was on the field Tuesday at Petco Park, a couple hours before first pitch, when a crowd of roughly two dozen onlookers screamed his first name in unison.

Adrian Gonzalez Named AL Player Of The Week (07/2012): Adrian Gonzalez's second-half surge began in earnest this week, and he was recognized for it.

Adrian Gonzalez Playing Right Field At Fenway Park Must End Now (05/2012): The Red Sox are rather lucky to have won the past two games.

Adrian Gonzalez frustrated by failings (04/2012): TORONTO - A year ago, when the Red Sox trudged home after going winless on a season-opening six-game road trip,...

Adrian Gonzalez put up fantastic numbers and his teammates love him, but he only (02/2012): One thing people don't understand about Adrian Gonzalez is that he lives on a planet where the only things that matter are his faith, family and the next day's starting pitcher.

Adrian Gonzalez speaks out on breakdown in Red Sox' leadership (10/2011): Three weeks after the Red Sox' season crumbled like the Berlin Wall, Adrian Gonzalez is still looking for answers. In...

Adrian Gonzalez says all could be well with the Red Sox by nightfall on Sunday (09/2011): NEW YORK - If you have a choice of listening to Adrian Gonzalez or the gloomy, depressing Sunday morning news talk shows, choose Gonzo. He's the sunny sky on a rainy day, the voice of hope in an endless abyss.

Red Sox star Adrian Gonzalez was player of the week, but what about the year? (08/2011): BOSTON - It was quite a week for Adrian Gonzalez, one of three Red Sox players in contention for the American League's Most Valuable Player award. The first baseman hit five home runs and won the AL player of the week award. Almost simultaneously, Gonzalez fell behind in the major league RBI race.

Saturday's betting tips: Adrian Gonzalez injury concerns (07/2011): Weather watch A mild and calm summer day is forecast throughout baseball today, with temperatures not expected to reach triple digits at any ball park. Wind shouldn’t be much a factor either anywhere. Who’s hot AL: The Rangers have won 16 of t...

Adrian Gonzalez, David Ortiz Non-Factors In Phillies Win Over Red Sox (06/2011): Jun 30, 2011 - The series between the Boston Red Sox and the Philadelphia Phillies is supposed to be a possible World Series preview.

A Triple Crown for Boston Red Sox star Adrian Gonzalez? It's possible (05/2011): NEW YORK - When Carl Yastrzemski appeared at Fenway Park for the home opener in April, he predicted his 1967 Triple Crown would not be the last in baseball.

Will The Padres Have A Winning Season Without Adrian Gonzalez? (03/2011): An audio recording of this interview will be posted here within a few hours of the live broadcast. A transcript will also be added within 24 hours. Thank you for your patience.

Adrian Gonzalez a rock of faith in all facets (12/2010): Last of a three-part series introducing Red Sox fans to the team's new first baseman. SAN DIEGO - If he does...