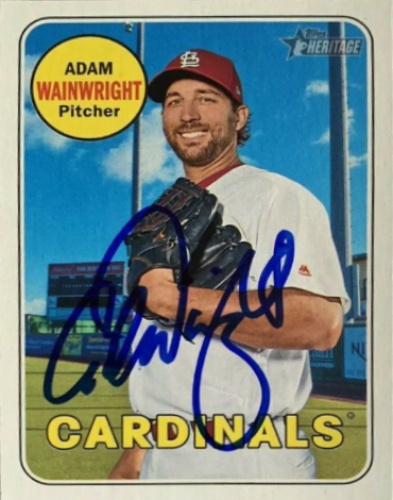 Adam Parrish Wainwright (born August 30, 1981), nicknamed "Waino" and "Uncle Charlie", is an American professional baseball pitcher for the St. Louis Cardinals of Major League Baseball (MLB). The Atlanta Braves selected him 29th overall in the first round of the 2000 amateur draft from Glynn Academy in Brunswick, Georgia. Wainwright's performance in the minor leagues brought him notice as one of the Braves' top pitching prospects. The Braves traded him to the Cardinals after the 2003 season, receiving outfielder J. D. Drew. Wainwright made his MLB debut on September 11, 2005, against the New York Mets. More about Adam Wainwright

Current items with a signature of Adam Wainwright

These are the most current items with a signature of Adam Wainwright that were listed on eBay and on other online stores - click here for more items.

Traded items with a signature of Adam Wainwright

If you're interested in Adam Wainwright Rookie cards you might want to take a look at our sister site that specializes in Baseball Rookie Cards only.

Most recently, these items with a signature of Adam Wainwright were sold on eBay - click here for more items.

Cardinals' Adam Wainwright to return for final MLB season in 2023 (10/26/22): Wainwright will pitch in his 18th big-league season after all

Cardinals' Adam Wainwright explains late-season struggles in insightful Twitter (10/12/22): Wainwright did not finish strong, and he made sure fans knew why

Cardinals' Adam Wainwright and Yadier Molina make MLB history with 325th career (09/2022): Molina has said he will retire after 2022, but Wainwright has not committed to any future plans

Cards marvel at 'incredible' Pujols after grand day (08/2022): The Cardinals are the first team in MLB history to have a player at least 40 years old hit a grand slam (Albert Pujols) and another at least 40 to pitch seven shutout innings (Adam Wainwright) in the same game.

Cardinals' Albert Pujols makes first career appearance as pitcher; Yadier Molina (05/2022): Molina and Wainwright won for the 203rd time as a battery, but then Pujols finished the game on the mound

Cardinals' Albert Pujols gets standing ovation, starts at DH on Opening Day in S (04/2022): Pujols was joined in the Opening Day lineup by Adam Wainwright and Yadier Molina

Wainwright uncertain of his future with Cardinals (11/2020): Adam Wainwright, who has spent his entire 15-year MLB career with the Cardinals, is unsure of his future with the team entering free agency. "We just don't know what they're going to be offering -- or if they will offer," he said.

Wainwright, 39, tosses complete game on birthday (08/2020): Adam Wainwright, who celebrated his 39th birthday on Sunday, threw a four-hitter for his 23rd career complete game and first in four years as the Cardinals beat the Indians 7-2.

Wainwright guaranteed $5M by Cards, can earn $5M for starts (11/2019): Adam Wainwright is guaranteed $5 million in his one-year contract with the St. Louis Cardinals and can earn up to $5 million in performance bonuses, which allows the pitcher to match his 2019 earnings. Wainwright's contract, announced Tuesday, calls for $1.5 million each for 20 and 25 starts, and

NLCS sweep puts damper on Cardinals' 92-win season (10/2019): From one corner of a sullen clubhouse came the glass half full view of the St. Louis Cardinals' season. ''People did not think we were going to be here,'' veteran pitcher Adam Wainwright said. ''I think if you had asked Cardinals (fans) in spring training if we got to the

Adam Wainwright has elbow surgery to address lingering discomfort (10/2014): SAN FRANCISCO, CA - OCTOBER 16: Adam Wainwright #50 of the St. Louis Cardinals pitches in the first inning while taking on the San Francisco Giants during Game Five of the National League Championship Series at AT&T Park on October 16, 2014 in San Francisco, California.

Adam Wainwright again accepts blame for Derek Jeter incident at All-Star game (07/2014): The St. Louis Cardinals pitcher said he made a poor choice of words for implying that he served up pitches to Derek Jeter in Tuesday's MLB All-Star game

Adam Wainwright continues to be ridiculously good (05/2014): A lot of NL pitchers are having great years. Wainwright may be the best of them all.

How St. Simons Island native Adam Wainwright became an ace for the Cardinals (03/2014): For Adam Wainwright, two life-altering moments coincidentally happened in a span of less than an hour.

Adam Wainwright: Widen strike zone to speed up game (02/2014): Cardinals ace Adam Wainwright doesn’t think expanded replay will prolong games too much, but he has an idea on how to speed games up.

Red Sox vs. Cardinals, World Series Game 5 GIF recap: Jon Lester outduels Adam W (10/2013): Wainwright hit Yadier Molina right where he was set up, but he could have thrown the ball anywhere and Ortiz likely still would have hit it, as evidenced by his outrageous .733 batting average in the series.

Adam Wainwright stifles Braves for NL-leading 15th win (08/2013): Yadier Molina had three hits with a pair of doubles to raise his NL-leading average to .337, five points ahead of the Braves' Chris Johnson, who had a pair of singles.

Adam Wainwright gem puts Cardinals up, 3-1 (10/2012): ST. LOUIS - Adam Wainwright threw seven innings of four-hit ball and the St. Louis Cardinals roughed up Tim Lincecum and the San Francisco Giants in an 8-3 rout last night that gave them a 3-1 lead in the NL championship series.

Adam Wainwright rocked, Nationals beat Cardinals 10-0 (09/2012): WASHINGTON - St. Louis leads the National League in batting average and runs, not that anyone would assume...

Is the real Adam Wainwright fully back? (08/2012): While his velocity is down, he’s showing all the signs of vintage Waino.

When will the real Adam Wainwright show up? (04/2012): Things to watch for in tonight’s start that might give a hint where pitcher is headed.

Adam Wainwright set to make second spring training start (03/2012): The Redbirds hit the road to Port St. Lucie today for an afternoon matchup against the Mets at Digital Domain Park.

SPORTS: Blog by Cardinals ace Adam Wainwright lifts injured collegian's faith (03/2011): GREENSBORO, N.C. (BP)--Eric Chiz couldn't wait to get back on the baseball field. A junior at North Carolina A&T State University and a catcher on the baseball team, Chiz sat out all of last season after undergoing shoulder surgery.