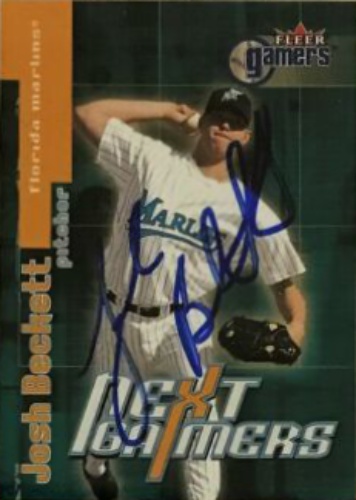 Joshua Patrick Beckett (born May 15, 1980) is an American former professional baseball pitcher in Major League Baseball (MLB). A three-time MLB All-Star, he played for the Florida Marlins, the Boston Red Sox, and the Los Angeles Dodgers. More about Josh Beckett

Current items with a signature of Josh Beckett

These are the most current items with a signature of Josh Beckett that were listed on eBay and on other online stores - click here for more items.

Traded items with a signature of Josh Beckett

If you're interested in Josh Beckett Rookie cards you might want to take a look at our sister site that specializes in Baseball Rookie Cards only.

The most expensive item with a signature of Josh Beckett (Josh Beckett Marlins Red Sox Dodgers Game Used Signed Auto Glove 2006 PSA) was sold in February 2020 for $1250.00 while the cheapest item (Josh Beckett signed 00 SP Top Prospects Card) found a new owner for $0.25 in July 2010. The month with the most items sold (56) was October 2008 with an average selling price of $22.50 for an autographed item of Josh Beckett. Sold items reached their highest average selling price in April 2021 with $75.62 and the month that saw the lowest prices with $0.99 was April 2019. In average, an autographed item from Josh Beckett is worth $24.99.

Most recently, these items with a signature of Josh Beckett were sold on eBay - click here for more items.

Dodgers' Josh Beckett announces retirement (10/08/14): Josh Beckett, facing surgery for a torn labrum in his left hip that caused him to miss most of the last three months of the season, has retired at 34, ending a 14-year career that included two World Series championships.

Josh Beckett to retire at 34 after hip surgery (10/08/14): LOS ANGELES — Dodgers pitcher Josh Beckett, facing surgery for a torn labrum in his left hip that caused him to miss most of the last three months of the season, has retired at 34, ending a 14-year career that included two World Series championships. He threw a no-hitter in ...

Dodgers' Josh Beckett announces retirement (10/2014): Josh Beckett, facing surgery for a torn labrum in his left hip that caused him to miss most of the last three months of the season, has retired at 34, ending a 14-year career that included two World Series championships.

Josh Beckett confirms his season is over and he may retire (09/2014): For a man who said he wasn’t announcing anything, Josh Beckett sounded a lot like a man ready to walk away.

Dodgers send Paco Rodriguez back down, activate Josh Beckett (07/2014): That was brief, if at least encouraging.

Turns out there is winner for rotation's fifth spot — Josh Beckett (03/2014): There was a competition, sort of. And there is a winner, apparently.

ARIZONA 1, DODGERS 0: Josh Beckett's outing goes all for naught (04/2013): PHOENIX - Watching Josh Beckett pitch his best game for the Dodgers, manager Don Mattingly decided it was the pitcher's game to win or lose.

DODGERS 9, ANGELS 8: Josh Beckett wins duel of struggling starters (03/2013): It was hardly a pitchers' duel Friday night at Dodger Stadium in the second of a three-game series between the Angels and Dodgers to close out the spring.

Report: Josh Beckett charity one of many giving less than expected (02/2013): Josh Beckett's foundation donated just 37 cents on the dollar, according to a report by the Boston Globe. ( Thearon W. Henderson / Getty Images / September 7 , 2012 )

Dodgers Pitcher Josh Beckett -- Board with His Hot Wife (12/2012): L.A. Dodgers pitcher Josh Beckett got the paddle from his smokin' hot bikini-clad wife in Maui this weekend.With his wife Holly at the helm of a stand up paddle board, Josh sat back and enjoyed the ride.Ladies, never let your man weigh you down.

Josh Beckett boosts Dodgers to fifth straight victory (09/2012): Matt Kemp has regained his home-run stroke, the Dodgers keep winning, and yet it still might not be enough to eke into the playoffs.

Josh Beckett injury: Red Sox righty leaves game with back spasms (07/2012): The Boston Red Sox failed in their attempts to trade righthander Josh Beckett before Tuesday’s trade deadline, and Beckett then went out and drew the ire of Fenway Park fans by failing to make it out of the third inning.

A tick up,then down for Josh Beckett (04/2012): The good news on the Josh Beckett front is that the right-hander had his second strong start in a row last night...

Josh Beckett: 'I had lapses in judgment' (02/2012): By Nick Cafardo, Globe Staff FORT MYERS, Fla. There was a little more personal accountability in the words of...

Ask Nick: Will Josh Beckett hold a grudge? (01/2012): Have a question? Submit your question here to be considered for the next edition of Ask Nick. As we...

Josh Beckett lacking for delivery (09/2011): BALTIMORE - One of the biggest storylines of the first half was Josh Beckett's return to form. "He's better than...

A Look At The Making Of The New Josh Beckett (08/2011): Your browser does not support iframes. Each Wednesday, throughout the Red Sox season, WEEI will give away three pairs of tickets to our loyal listeners after our Baseball Insider interviews. Dennis & Callahan...

Pirates To Miss Josh Beckett (06/2011): The Pirates have already picked up a moral victory before the start of their 3-game series versus the Boston Red Sox.

Justin Verlander outduels Josh Beckett as Tigers salvage a split with Red Sox (05/2011): DETROIT – Jose Valverde and David Ortiz had the two biggest matchups of an exhausting Sunday. They split, and as a result, so did the Detroit Tigers and Boston Red Sox.

Explosive 4th sinks Josh Beckett (04/2011): BALTIMORE - What, you thought a breezy, fun-filled trip to the Other Coast was going to solve all the Red Sox'...

Josh Beckett looking to regain form for Boston Red Sox (03/2011): The right-hander struggled through the 2010 season

Josh Beckett hit in head by ball (02/2011): Red Sox right-hander Josh Beckett was hit in the back of the head on Monday during batting practice before Boston's exhibition game against the Minnesota Twins at City of Palms Park.

Mound of facts against Josh Beckett (01/2011): This is one of those good news/bad news things, so let's start with the good news: Jack Morris, David Cone and...

With Powerful New Additions to Lineup, Red Sox Need More Out of Josh Beckett in (12/2010): There's reason to feel excited as a Red Sox fan. The additions of Adrian Gonzalez and Carl Crawford have the city buzzing, but there's good reason to make sure that enthusiasm is a bit tempered for now.