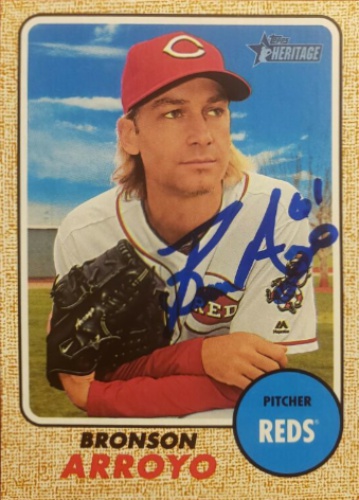 Bronson Anthony Arroyo (born February 24, 1977) is an American former professional baseball pitcher and musician. He played in Major League Baseball (MLB) for the Pittsburgh Pirates between 2000 and 2002, the Boston Red Sox from 2003 to 2005, the Cincinnati Reds from 2006 to 2013, the Arizona Diamondbacks in 2014, and the Reds again in 2017. More about Bronson Arroyo

Current items with a signature of Bronson Arroyo

These are the most current items with a signature of Bronson Arroyo that were listed on eBay and on other online stores - click here for more items.

Traded items with a signature of Bronson Arroyo

The most expensive item with a signature of Bronson Arroyo (BRONSON ARROYO SIGNED ACCOUSTIC GUITAR BOSTON RED SOCKS PITCHER) was sold in February 2016 for $250.00 while the cheapest item (BRONSON ARROYO Signed 1998 Card BOSTON RED SOX Auto) found a new owner for $0.05 in April 2008. The month with the most items sold (20) was February 2008 with an average selling price of $9.99 for an autographed item of Bronson Arroyo. Sold items reached their highest average selling price in August 2019 with $175.00 and the month that saw the lowest prices with $3.00 was June 2019. In average, an autographed item from Bronson Arroyo is worth $12.50.

Most recently, these items with a signature of Bronson Arroyo were sold on eBay - click here for more items.

MLB Star Power Index: Marlins have smooth Jazz; Walker Buehler gets Britpop sere (04/13/21): It's once again time for whatever this is

Bronson Arroyo was pretty sure he had a torn UCL for his last six starts (07/08/14): And, really, he wasn't terrible in that stretch.

Bronson Arroyo was pretty sure he had a torn UCL for his last six starts (07/2014): And, really, he wasn't terrible in that stretch.

Bronson Arroyo snake-bit as Mesoraco powers the Reds (05/2014): In a game built as a first meeting against a former teammate, it's Bronson Arroyo's catcher who powered the Reds past the Diamondbacks Friday night.

D-backs Look for Rock 'n' Roll Pitching from Bronson Arroyo (03/2014): It's not difficult to imagine that Bronson Arroyo lives life like a rock star. The Arizona Diamondbacks' new pitcher has long blond hair, makes millions of dollars, likes to party, and actually has a rock album that reached Billboard charts. The reality is quite different.

Bronson Arroyo is still a free agent, and he's not happy about it (01/2014): Spring Training is only a few weeks away and free agent pitcher Bronson Arroyo still doesn't know which team he'll be reporting to.

Bronson Arroyo free agency: Mets, Twins showing serious interest (11/2013): The free agent right-hander could be a good veteran presence to stabilize a shaky rotation. Cotillo reports that the Mets are "heavily involved" in talks with Arroyo, who turns 37 in February.

Bronson Arroyo wants 3-year contract, doesn't think Reds able to offer deal (10/2013): Loading... "I have no preference on where I want to pitch but I’ll certainly consider the team, their chances of winning, and all of that," Arroyo told reporters. "I feel I can pitch effectively at 37, 38, and 39 years old. I’ve never missed a start. Never been injured.

Mets rumors: Bronson Arroyo open to playing in New York (09/2013): Loading... Arroyo said Tuesday said that the Mets "definitely" a team that he "would look at" in free agency this offseason.

Video: Bronson Arroyo on his complete-game shutout (07/2013): Bronson Arroyo breaks down his performance on the mound in the Reds’ 11-0 win in Monday’s series opener against the Giants in San Francisco:

A's rip Bronson Arroyo and roll to win over Reds (06/2013): OAKLAND -- Bob Melvin can finally field something close to his optimum batting order, and Tuesday night, the A's showed the potential potency of that lineup if it can just stay healthy for awhile.

Will Phillies feast on Bronson Arroyo? (04/2013): After scoring just six runs in three games in Miami, the Phils arrive in Cincinnati to face a pitcher they traditionally beat up.

DENVER -- Coors Field has given Bronson Arroyo fits in his career, but the right (07/2012): Arroyo pitched effectively into the seventh inning, Ryan Ludwick scored twice and the Cincinnati Reds beat the Colorado Rockies 3-0 Friday night for their eighth straight victory.

FOX19's exclusive interview with Reds pitcher Bronson Arroyo (05/2011): FOX19's Tricia Macke sat down with Reds starting pitcher, Bronson Arroyo. He talks about his pitching style, his hair, and his life outside of baseball. Watch the whole interview here.