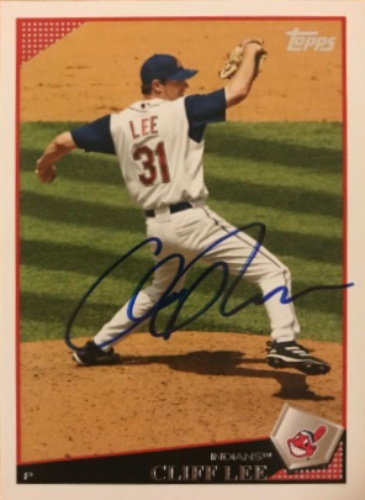 Clifton Phifer Lee (born August 30, 1978) is an American former professional baseball starting pitcher who played for 13 seasons in Major League Baseball (MLB). Between 2002 and 2014 he played for four teams, most notably the Philadelphia Phillies, before an elbow injury forced him into retirement. During his career, Lee was a member of five All-Star teams, won the Cy Young Award, and had consecutive World Series appearances in 2009 and 2010 with the Phillies and Texas Rangers. More about Cliff Lee

Current items with a signature of Cliff Lee

These are the most current items with a signature of Cliff Lee that were listed on eBay and on other online stores - click here for more items.

Traded items with a signature of Cliff Lee

If you're interested in Cliff Lee Rookie cards you might want to take a look at our sister site that specializes in Baseball Rookie Cards only.

Most recently, these items with a signature of Cliff Lee were sold on eBay - click here for more items.

Cliff Lee Will Try Rehab Without Arm Surgery (03/17/15): The four-time All-Star lefty was placed on the 60-day disabled list by the Phillies to attempt to rehabilitate an elbow injury without surgery. The team announced Monday that an operation was recommended.

Phillies' Cliff Lee on 60-day DL, will try to rehab arm without surgery (03/16/15): Cliff Lee has been placed on the 60-day disabled list by the Philadelphia Phillies to attempt to rehabilitate an elbow injury without surgery.

Cliff Lee has already begun throwing off a mound (01/2015): Cliff Lee is expected to be ready for the start of spring training and will become trade bait this summer if he can prove that he's fully healthy.

Phillies stay or go: Cliff Lee (10/2014): Phillies veteran lefthander could fetch a haul of prospects over the winter should the front office elect to trade him.

Phillies confident Cliff Lee will be ready for Opening Day (09/2014): The Philadelphia Phillies find themselves on the outside of the playoff picture, and are shifting their focus to the beginning of next season.

Cliff Lee doesn't need surgery, just rest (08/2014): It looked like Cliff Lee's season was done when he sustained a Grade 2 flexor pronator strain in Washington July 31 and a visit with orthopedist David Altchek in New York confirmed that thought.

Cliff Lee placed on DL, likely done for season (07/2014): As if the Phillies didn't need anything else to go wrong.

Cliff Lee poised to step up his recovery process (06/2014): As he comes back from an elbow injury, Cliff Lee is getting set to increase and expand his workload.

Cliff Lee is doing just fine, thanks (04/2014): The Phillies' ace is back to his usual dominance.

Cliff Lee could start this weekend (07/2013): Cliff Lee appears on schedule to start sometime this weekend. He missed his last start because of a stiff neck.

Possible draft day trades for Cavs, trading for Cliff Lee and backup defensive l (06/2013): Here are what blogs from Cleveland and around the country are saying about the Browns, Cavaliers and Indians. Featured today are Bleacher Report, Wahoo's On First and Dawgs By Nature.

Hot rumor: Cliff Lee’s next locale. Could it be Texas? (05/2013): The Phillies’ slide has their ace thinking about winning with another team.

Cliff Lee ready to face Cleveland Indians for first time since trade (04/2013): CLEVELAND — Ask Cliff Lee what his most memorable game was with the Indians and he points to three games he DIDN’T pitch.

Phillies' Cliff Lee content to stay under radar (02/2013): Cliff Lee made his first appearance of the spring Monday, tossing a painless two innings of no-hit baseball. He struck out two, walked one hitter and gave up no runs.

Phillies' Cliff Lee Is Arkansas' Top Dollar Athlete (12/2012): Philadelphia Phillies pitcher Cliff Lee in 2012 enjoyed the most lucrative of his nine-plus seasons in Major League Baseball. Lee earned $21.5 million — that's nearly $3.6 million per win — and topped the list of highest-paid athletes with ties to the state of Arkansas.

Cliff Lee Should Be A Cy Young Candidate Despite 6-9 Record (10/2012): Despite his 6-9 record, Cliff Lee should be considered a candidate for the Cy Young award.

Cliff Lee's single in the ninth gives Marlins win (09/2012): MIAMI - With the way the season was shaping up, it was going to be a long shot for the Philadelphia Phillies...

Cliff Lee pitches new-look Philadelphia Phillies past Washington Nationals (07/2012): Lee (2-6) allowed five hits and one walk and struck out seven for Philadelphia, which snapped a three-game losing streak. He hit a two-out single to drive in John Mayberry in the fourth inning.

What's wrong with Cliff Lee? Don't ask the Phillies. (06/2012): MIAMI — Answers for how a $120 million pitcher has a 7.30 ERA in his last four starts are apparently non-existant or secrets if you ask the Phillies. "I really don't have an explanation," Cliff Lee said.

Cliff Lee does everything but win, but Phils rally over Cardinals in 10 (05/2012): ST. LOUIS – Cliff Lee didn’t have a win in six starts this season entering Friday night, but more unsettling for the competitive and combative left-hander was the fact that the Phillies had won just one of his those six games.

Phillies Notes: Exploring the Joe Jordan-Cliff Lee connection (02/2012): CLEARWATER, Fla. - When someone new joins the Phillies, it's always interesting to see whether there is any link to the people already in the organization.

He's no Cliff Lee: C.J. Wilson, Rangers blown out by Rays in Game 1 (09/2011): Matt Moore dominated in his second major league start, pitching seven innings of two-hit ball as the improbable Tampa Bay Rays opened the real playoffs with a 9-0 victory over the defending AL champion Texas Rangers on Friday.

Baseball: Cliff Lee gets all but final out in Philadelphia Phillies' shutout win (08/2011): Left-hander wanted the complete game, but Ryan Madson finishes off victory over Cincinnati Reds.

Happy first anniversary, Cliff Lee trade (07/2011): The original deal was said to have had premier catching prospect Jesus Montero , Adams and pitcher Zach McAllister going to Seattle for Lee. With Adams out, the M's asked for the deal to be reworked.

Blog: LT, obscure golfers and is it time to worry about Cliff Lee? (04/2011): Item: Lawrence Taylor gets lowest sex-offender status after he pleaded guilty to sex crimes. That's like saying your tire is only flat on the bottom.

Phillies' Cliff Lee puts faith in simple training routine (03/2011): There is a reason, Cliff Lee says, why he found a routine he liked nine years ago and has essentially stuck with that exact program through three trades and a Cy Young Award.

Yankees fan Paul Simon: Where have you gone, Cliff Lee-io? (02/2011): CLEARWATER, Fla. - Paul Arnold is a violinist for the Philadelphia Orchestra and also a baseball fan whose lifetime rooting interests have been divided neatly into two equal parts.

Another person takes credit for Cliff Lee's return (01/2011): Apparently this is the vogue thing to do. So now the Phillies not only have the magic loogie spat by Yankees fans to thank for Cliff Lee's triumphant return to Philadelphia, but Texas Rangers owner Chuck Greenberg wants some credit, too.

Cliff Lee Signs with Philly, Rocks MLB Betting (12/2010): Cliff Lee has signed with the Philadelphia Phillies in a move that came as a surprise to most Major League Baseball observers and that will have a big impact on odds betting.