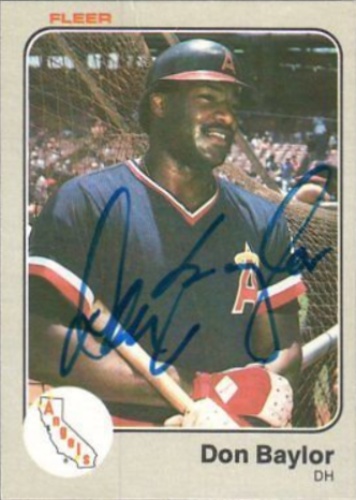 Don Edward Baylor (June 28, 1949 – August 7, 2017) was an American professional baseball player and manager. During his 19 seasons in Major League Baseball (MLB), Baylor was a power hitter known for standing very close to home plate ("crowding the plate") and was a first baseman, left fielder, and designated hitter. He played for six different American League (AL) teams, primarily the Baltimore Orioles and California Angels, but he also played for the Oakland Athletics, New York Yankees, Minnesota Twins, and Boston Red Sox. In 1979, Baylor was an All-Star and won the AL Most Valuable Player Award. He won three Silver Slugger Awards, the Roberto Clemente Award, and was a member of the 1987 World Series champion Minnesota Twins. More about Don Baylor

Current items with a signature of Don Baylor

These are the most current items with a signature of Don Baylor that were listed on eBay and on other online stores - click here for more items.

Traded items with a signature of Don Baylor

If you're interested in Don Baylor Rookie cards you might want to take a look at our sister site that specializes in Baseball Rookie Cards only.

The most expensive item with a signature of Don Baylor (DON BAYLOR CALIFORNIA ANGELS 1979 AL MVP JSA/COA SIGNED JERSEY) was sold in July 2020 for $400.00 while the cheapest item (Don Baylor Signed Baseball Card) found a new owner for $0.01 in August 2014. The month with the most items sold (73) was August 2017 with an average selling price of $12.50 for an autographed item of Don Baylor. Sold items reached their highest average selling price in August 2012 with $100.00 and the month that saw the lowest prices with $0.29 was February 2019. In average, an autographed item from Don Baylor is worth $9.99.

Most recently, these items with a signature of Don Baylor were sold on eBay - click here for more items.

Spring sports preview: Baylor baseball team looks like a hit again (03/11/19): Preseason hype is typically only good for adding extra pressure and setting a team up for a letdown.

Bats Come Alive in Baseball's 10-3 Victory Over Nebraska - Baylor University Ath (03/10/19): The bats for No. 21 Baylor came alive in a big way on Sunday afternoon at Baylor Ballpark, blasting 10 runs on 18 hits to defeat visiting Nebraska, 10-3.

No doubt about it: Baylor bashes three homers, rides Kettler's arm to rout of Bi (02/22/19): Baylor looked like a team from the future, a week (and some light-years) ahead of Cornell. And in a very real sense, that’s exactly what both teams were.

No. 12/15 Bears Complete Four-Game Sweep of Holy Cross - Baylor University Athle (02/17/19): No. 12/15 Baylor baseball finished off a four-game sweep of the Holy Cross Crusaders with a 6-1 win Sunday afternoon at Baylor Ballpark.

MLB playoffs preview: Don Baylor's hard-hitting Angels head for October (09/29/14): Although he deflects any credit, the former Angels slugger and big-league manager known to everybody as "Groove" has his hitters right on track for a memorable October.

Don Baylor's hard-hitting Angels head for October (09/2014): ANAHEIM, Calif. (AP) Don Baylor's return to the Los Angeles Angels got off to an unbelievably inauspicious start when the hitting coach broke his leg while crouching to catch the ceremonial first pitch on opening day.

Don Baylor is back from a broken femur and probably won’t be fighting anyone (06/2014): One of the saddest moments of the season was Angels hitting coach Don Baylor fracturing his femur while catching Vladimir Guerrero's ceremonial first pitch on Opening Day.

Diamondbacks' Don Baylor feels Justin Upton's pain (08/2011): Don Baylor knows what Justin Upton is going through when it comes to beanings. During his 19-year career in Major League Baseball, he was hit 267 times, the third highest in history.