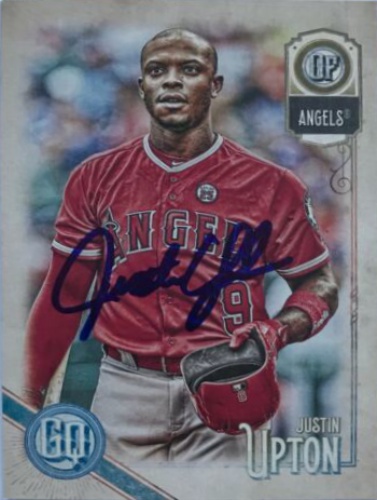 Justin Irvin Upton (born August 25, 1987) is an American professional baseball outfielder for the Seattle Mariners of Major League Baseball (MLB). Nicknamed "J-Up", he has previously played in MLB for the Arizona Diamondbacks, Atlanta Braves, San Diego Padres, Detroit Tigers, and Los Angeles Angels. He has been a teammate of his brother B. J. Upton with both the Braves and the Padres. While primarily a right fielder throughout his career, Upton has since transitioned to left field for the Braves, Padres and Tigers. More about Justin Upton

Current items with a signature of Justin Upton

These are the most current items with a signature of Justin Upton that were listed on eBay and on other online stores - click here for more items.

Traded items with a signature of Justin Upton

The most expensive item with a signature of Justin Upton (Warstic | Justin Upton 2017 MLB Player's Weekend Game-Used & Autographed Bat) was sold in December 2017 for $614.00 while the cheapest item (Justin Upton ARIZONA DIAMONDBACKS Signed TOPPS Card) found a new owner for $0.01 in October 2010. The month with the most items sold (38) was April 2013 with an average selling price of $67.47 for an autographed item of Justin Upton. Sold items reached their highest average selling price in July 2016 with $90.00 and the month that saw the lowest prices with $2.25 was October 2019. In average, an autographed item from Justin Upton is worth $21.49.

Most recently, these items with a signature of Justin Upton were sold on eBay - click here for more items.

Mariners, Justin Upton reach deal as four-time All-Star finds home after Angels (05/22/22): Upton will head to extended spring training as he attempts to get back into game shape

Five potential Justin Upton landing spots: Why Dodgers, Padres, more could add v (04/10/22): Upton was let go by the Angels at the start of the 2022 MLB season

Angels' Justin Upton: Shohei Ohtani -- not Mike Trout -- is 'the most talented b (12/2020): Upton appeared on the "Fantasy Baseball Today Podcast" on Wednesday

MLB trends: Inside J.D. Martinez's decline against fastballs and Justin Upton's (09/2020): The Red Sox slugger is renowned for using video to make adjustments, but players are banned from doing that in 2020

Hart On Justin Upton, Lester, Gattis (11/2014): Braves President of Baseball Operations John Hart was a guest of Jim Bowden and Jim Duquette on MLB Network Radio’s “The Front Office” and addressed numerous topics. Here are the highlights (all links go to the Twitter accounts of Bowden and … Continue reading →

B.J., Justin Upton make history with homer, outfield assist each (09/2014): Justin and B.J. Upton became the first pair of brother teammates since 1900 to each hit a home run and record an outfield assist in the same game.

Justin Upton scratched with soreness in side (02/2014): Justin Upton was scratched from Wednesday's starting lineup when he told Braves manager Fredi Gonzalez that his right side has been sore the past couple of days.

Justin Upton to sit out tonight’s game due to his hurting hand (08/2013): Justin Upton took a pitch to the left hand last night. Mark Bowman of MLB.com reports that Upton is doing better and hopes to play tomorrow, but for now he needs to give it a rest. I guess they didn’t like the idea I floated this morning about B.J. donating his hand for a transplant.…

Justin Upton injury: Braves OF leaves with left calf strain (07/2013): Braves outfielder Justin Upton left the Atlanta's game against the Cincinnati Reds on Friday with a strained left calf, the team announced . Upton's status will be re-evaluated on Saturday.

Justin Upton expected to get love in ASG voting (04/2013): Justin Upton leads the Major Leagues with 11 home runs entering play Wednesday. He has positioned himself nicely to get plenty of votes for what would be his third All-Star Game selection.

Gonzalez: Justin Upton will bat 3rd for Braves (01/2013): Fredi Gonzalez sat down and started writing out projected lineups last week as soon as he heard the Braves had traded for Justin Upton.

Rangers official reportedly believed ‘we got’ Justin Upton (12/2012): The Rangers have long been linked to interest and efforts to trade for Diamondbacks outfielder Justin Upton. The latest round of speculation has included a multi-team deal including Upton and various configurations of six teams including the Diamondbacks, Indians, Rays, Royals and Mariners.

Possible landing spots for B.J. and Justin Upton (11/2012): The Upton brothers are heating up the Hot Stove. In a relatively thin free agent market for high-end talent, 28-year-old B.J. Upton has been getting plenty of attention, particularly from NL East teams in search of a centerfielder.

Justin Upton remains at peace with future, possible departure from Arizona Diamo (09/2012): In less than a month, the Diamondbacks' season will end, and so, too, could Justin Upton's career with the only major-league franchise he has ever known. Upton realizes this -- "It's very possible," he said.

Report: Arizona Diamondbacks' Justin Upton is claimed by unknown team (08/2012): While several Diamondbacks players were glued to the television sets in the clubhouse Friday, captivated by a potential blockbuster trade being considered by one of their biggest rivals -- the Los Angeles Dodgers -- another little news nugget caught their eye.

Justin Upton won’t be traded, says Diamondbacks owner (07/2012): Kendrick, speaking from his vacation home in Colorado, said it’s a “reasonable assumption” Upton will be a Diamondback the rest of the season. “I think we’re better off with him on our team,” Kendrick said. “I this whole thing has gotten way more attention than it deserves.”

Arizona Diamondbacks' Justin Upton bothered by bum thumb (04/2012): Notes: Upton hasn't participated in regular batting practice the past two days, a way to ease the stress on the thumb, which he injured while sliding hard into second base Sunday at Chase Field.

Arizona Diamondbacks' Daniel Hudson: We back Justin Upton (02/2012): Hudson was a KTAR-AM (620) guest Monday when he seemed to imply there would be retaliation if Upton continues to get drilled by pitches in 2012.

Justin Upton's April blast longest home run of season's first half (12/2011): These are the five biggest blasts of the first half of the 2011 MLB season. Contributor: Darren Pare Published: Jul 21, 2011

Diamondbacks' Justin Upton returns to lineup, then gets hit again (09/2011): Notes: Monday was simply an extra day off for Justin Upton, who passed all the tests after he was hit by a pitch on the helmet. However, in the 10th inning Tuesday, Upton had to leave the game after being hit in the head by a fly ball off the outfield wall.

Trophy or not, Diamondbacks' Justin Upton finally an MVP (08/2011): Bickley: Outfielder Justin Upton is finally morphing into an MVP player, whether he receives the trophy or not this season.

Justin Upton clears bases to lead Diamondbacks to win (07/2011): The Diamondbacks moved to within 3 games of the Giants in the NL West with a 6-4 win over the Dodgers on Saturday night in Los Angeles.

PHOENIX -- Ryan Roberts scored from third base on Justin Upton 's grounder with (05/2011): Roberts beat second baseman Dan Uggla 's throw home on the play, the second display of hustle Roberts put forth on a night when it made a big difference.

Arizona Diamondbacks' Justin Upton eager to be All-Star (04/2011): All-Star balloting began Tuesday, and Justin Upton has a firm expectation to play in the game under the giant sign that bears his name.

Source: Arizona Diamondbacks no longer trying to deal Justin Upton (12/2010): Three weeks ago, he was the most talked about trade chip at the annual general managers' meetings. But by Tuesday, it was all but official: Justin Upton isn't going anywhere.