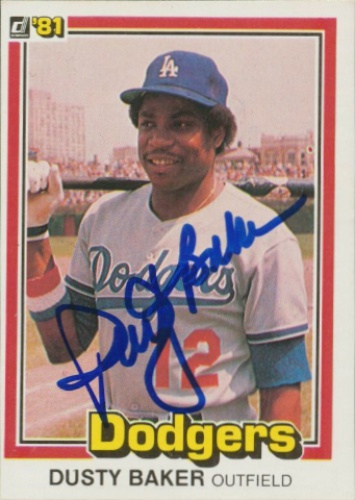 Johnnie B. "Dusty" Baker Jr. (born June 15, 1949) is an American baseball manager and former outfielder who is the manager of the Houston Astros in Major League Baseball (MLB). He previously played in MLB for 19 seasons, most notably with the Los Angeles Dodgers. During his Dodgers tenure, he was a two-time All-Star, won two Silver Slugger Awards and a Gold Glove Award, and became the first NLCS MVP, which he received during the 1977 National League Championship Series. He also made three World Series appearances, winning one in 1981. More about Dusty Baker

Current items with a signature of Dusty Baker

These are the most current items with a signature of Dusty Baker that were listed on eBay and on other online stores - click here for more items.

Traded items with a signature of Dusty Baker

If you're interested in Dusty Baker Rookie cards you might want to take a look at our sister site that specializes in Baseball Rookie Cards only.

The most expensive item with a signature of Dusty Baker (2002 SF Giants Team 34+ Signed World Series Baseball w/ Dusty Baker Sweet Spot) was sold in November 2021 for $257.00 while the cheapest item (ATLANTA BRAVES DUSTY BAKER © 1975 Topps Baseball card# .33, miscut, Autographed) found a new owner for $0.01 in November 2021. The month with the most items sold (57) was October 2021 with an average selling price of $15.00 for an autographed item of Dusty Baker. Sold items reached their highest average selling price in October 2019 with $59.98 and the month that saw the lowest prices with $0.99 was April 2014. In average, an autographed item from Dusty Baker is worth $11.56.

Most recently, these items with a signature of Dusty Baker were sold on eBay - click here for more items.

Baker back with Astros after missing 5 games (08/11/22): Houston Astros manager Dusty Baker returned Thursday for the finale of a series against the Texas Rangers following a five-game absence after testing positive for COVID-19.

Dusty Baker moves into 10th in wins for a manager as Astros notch 11th victory i (05/14/22): The Astros are a win away from tying their franchise record

Dusty Baker contract: Astros reach new one-year deal with manager as Houston beg (11/2021): Baker will be back for a third season with the Astros

Dusty Baker makes these Astros about so much more than a scandal (10/2021): Hate Houston if you want. But as one of Dusty Baker's former players, I know there's so much to love about its manager.

Elusive World Series title or not, Dusty Baker deserves to be in the Hall of Fam (10/2020): The longtime manager and his Astros recently fell to the Rays in the ALCS

Astros' Bregman set for IL with hamstring strain (08/2020): After leaving Wednesday's game when he favored with leg while running the bases, Astros third baseman Alex Bregman is being placed on the 10-day injured list with a right hamstring strain, manager Dusty Baker told reporters.

Astros pick up manager Baker's 2021 option (07/2020): The Houston Astros picked up the 2021 option on the contract of manager Dusty Baker on Tuesday, a relief for Baker, who has spent several seasons working as a lame duck while with previous teams.

Wine, solar energy and a joint with Jimi Hendrix: The interesting life of Dusty (06/2020): Dusty Baker isn't simply a retired baseball player and manager. And he was, and is, good at both. But there is so much more to the most interesting man in baseball.

Are we witnessing the end of the high-five? (05/2020): The celebration has been part of sports for more than 40 years. But with athletes rethinking distancing during the coronavirus pandemic, even the high-five's originator, Dusty Baker, is saying it's time to move on.

Baker takes over Astros, set for 'last hurrah' (01/2020): New Astros manager Dusty Baker said there will be no scandal on his watch. "This has been an embarrassment for a lot of people."

Dusty Baker: 'I never revel in anyone else's lament' (09/2014): Dusty Baker discusses what he's been doing during the Reds' season

Todd Telford on Marin motor sports: Novato's Smith gets unexpected lift from Dus (06/2014): SONOMA >> Racing drivers hold the wheel at 10 and two, but many spend far more time with their fingers crossed.

With a season on-deck, Dusty Baker's garden grows (03/2014): GRANITE BAY -- Dusty Baker looks at his overgrown collard greens and heads to the shed for his scissors.

Dusty Baker wants another shot (02/2014): As Major League Baseball camps open, Dusty Baker, fired as Cincinnati Reds manager after back-to-back 90-win seasons, finds himself without a job for only the third spring in nearly 50 years.

Video: Dusty Baker press conference from Pittsburgh (09/2013): Dusty Baker spoke to the media before the Reds took batting practice this evening in Pittsburgh.

Video: Dusty Baker on Homer Bailey’s loss (07/2013): Reds manager Dusty Baker said he did everything he could to try to get Homer Bailey a win in Sunday’s 3-2 loss to the Pirates:

Dusty Baker may be in The Best Shape of His Life (02/2013): At least his managerial life. This pic was taken on Saturday. Dude looks like he could cover right field today if he had to.

Cincinnati Reds Were Right to Stick With Dusty Baker , Right? (01/2013): COMMENTARY | This offseason, the Cincinnati Reds gave manager Dusty Baker a two-year contract extension and, effectively, at least two more opportunities to win it all.

Team President wants Dusty Baker to stay with the Reds “for many years to come” (08/2012): It’s hard to find a successful manager who polarizes his own team’s fan base as much as Dusty Baker. I’m not sure why. The stuff about him being hard on pitchers is pretty far in the past. I think he’s a pretty good manager. His players seem to like him. He does the one thing…

Dusty Baker: 10 facts (01/2011): Here are 10 facts about Reds manager Dusty Baker that you may not know. For example, Baker had a scholarship offer to play basketball at Santa Clara University.