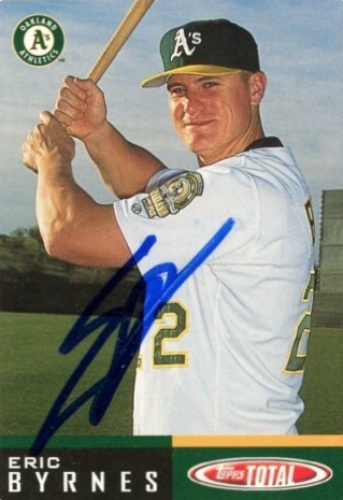 Eric James Byrnes (born February 16, 1976), is a baseball analyst and former professional baseball outfielder. He played in Major League Baseball (MLB) for the Oakland Athletics, Colorado Rockies, Baltimore Orioles, Arizona Diamondbacks, and Seattle Mariners. Byrnes retired from playing in 2010 and was an analyst for MLB Network until 2021. More about Eric Byrnes

Current items with a signature of Eric Byrnes

These are the most current items with a signature of Eric Byrnes that were listed on eBay and on other online stores - click here for more items.

Traded items with a signature of Eric Byrnes

The most expensive item with a signature of Eric Byrnes (Eric Byrnes DIAMONDBACKS Bat Autograph Signed MLB COA) was sold in January 2010 for $200.00 while the cheapest item (ERIC BYRNES 2000 BOWMAN #56 RC AUTO SIGNED ROOKIE Oakland A's Athletics baseball) found a new owner for $0.01 in January 2013. The month with the most items sold (14) was May 2008 with an average selling price of $21.35 for an autographed item of Eric Byrnes. Sold items reached their highest average selling price in January 2010 with $103.49 and the month that saw the lowest prices with $0.99 was January 2009. In average, an autographed item from Eric Byrnes is worth $6.99.

Most recently, these items with a signature of Eric Byrnes were sold on eBay - click here for more items.

Eric Byrnes all smiles in first of two nights with Pacifics (08/06/14): Four years ago, an 0-for-4 performance would have left Eric Byrnes shaking his head. So, too, would three strikeouts — all with a pair of runners aboard.

Pacifics notes: Eric Byrnes set to play for San Rafael on Tuesday, Wednesday (08/04/14): Eric Byrnes still remembers staring at the TV and not moving. As a left fielder with the Oakland Athletics 10 years ago, he was preparing to leave for a game when he found out Pat Tillman had been killed on duty in Afghanistan.

Eric Byrnes with Keith & Dave – March 18th, 2014 (03/2014): Eric Byrnes joined the guys and had his energy up as it always is. The guys talked contracts and Oakland A’s baseball. They also talked about the A’s getting a new stadium. Tagged: Arizona Diamondbacks, […]

PADECKY: Triathlete Eric Byrnes embraces life after baseball (05/2013): For 13 years Eric Byrnes's life was shaped by pro baseball. And then, in 2010, it was gone. Restless by nature, he's found a new challenge in triathlons. He'll compete Sunday in Monte Rio.

Eric Byrnes Talks Orioles And Postseason Baseball (09/2012): Former Orioles player and MLB Network host, Eric Byrnes, joins Haynie & Zinno, to talk Orioles baseball and give his postseason predictions. Bryne briefly talks about his time spent as an Orioles outfielder and adds that the Orioles have [...]