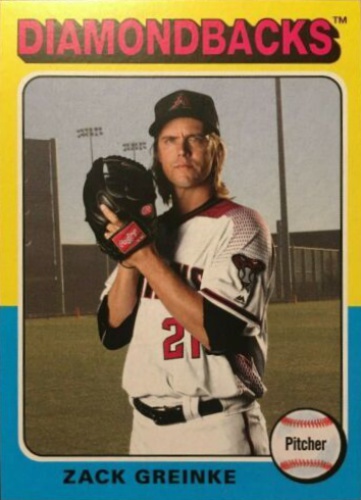 Current items with a signature of Zack Greinke

These are the most current items with a signature of Zack Greinke that were listed on eBay and on other online stores - click here for more items.

Traded items with a signature of Zack Greinke

If you're interested in Zack Greinke Rookie cards you might want to take a look at our sister site that specializes in Baseball Rookie Cards only.

Most recently, these items with a signature of Zack Greinke were sold on eBay - click here for more items.

Zack Greinke will save Royals from getting swept, plus other best bets for Wedne (09/07/22): In 10 starts this season at Kauffman Stadium, Greinke has accumulated a 4-2 record to go along with a 1.98 ERA

Royals' Greinke put on IL with right flexor strain (05/31/22): The Royals placed right-handed starter Zack Greinke on the 15-day injured list with a right flexor strain Monday, a day after he lasted only four innings against the Twins because of the injury.

Royals' Zack Greinke continues to succeed in unorthodox way (05/02/22): Greinke isn't striking out anyone, making him an outlier in MLB

Astros' Zack Greinke guts way through four World Series innings in what could be (10/2021): Greinke put the Astros in position to win on Saturday night, but Houston fell short in Game 4

Astros' Greinke (neck) scratched, goes on IL (09/2021): The Houston Astros' Zack Greinke, who was scratched from his start Friday night, went on the 10-day injured list with a sore neck.

Odorizzi excited to play with Greinke on Astros (03/2021): Jake Odorizzi decided to fashion his game like Zack Greinke's when he was still in high school.

Zack Greinke might miss major milestone due to MLB shutdown; will that matter fo (05/2020): Greinke is 378 strikeouts short of hitting 3,000 for his career

Arenado, Gordon get 7th Gold Gloves, Greinke 6th (11/2019): ST. LOUIS (AP) -- Colorado third baseman Nolan Arenado won his seventh straight Gold Glove and pitcher Zack Greinke earned his sixth in a row, getting the National League honor for the fourth months he spent with Arizona before he was traded to Houston.

Zack Greinke dodges questions about his future after this season (02/2015): Zack Greinke reported Thursday for what could be his final spring training with the Dodgers.

Dodgers won't extend Zack Greinke's contract this winter (12/2014): One of the most prominent subplots in the Dodgers' interest in Jon Lester is this: Zack Greinke can opt out of his contract after next season.

BEHIND ENEMY LINES Trade that sent Zack Greinke to Milwaukee paved Royals' road (10/2014): They talk about the trade every day.

Dodgers bail out shaky start by Zack Greinke with late rally to beat Cubs (09/2014): The Dodgers won a game started by Zack Greinke, which, on the surface, probably doesn't sound surprising.

A day later, Zack Greinke still good to go for next Dodgers start (08/2014): And on Sunday morning, all smiles.

Yasiel Puig, Zack Greinke star for Dodgers in big win over Giants (07/2014): Yasiel Puig tied a franchise record with three triples and added a double and two RBIs as the Los Angeles Dodgers moved within a half-game of NL West-leading San Francisco by beating the Giants 8-1 on Friday night.

Little goes right for Dodgers, Zack Greinke in 5-3 loss to Mets (05/2014): It was going to happen someday. Nobody keeps a roll going like that forever, not even Zack Greinke. Inevitable as a spring breeze.

Zack Greinke appears unlikely to pitch for Dodgers in Australia (02/2014): PHOENIX -- Zack Greinke might not be ready to pitch when the Dodgers open their season in three weeks.

Daily Dodger in Review: No small feat, Zack Greinke delivers as expected (11/2013): Dodgers ace Zack Greinke finished the 2013 season with a 2.63 ERA, and a record of 15-4. The Dodgers advanced to the National League Championship Series where they were eliminated by the St. Louis Cardinals.

MLB: Zack Greinke, Dodgers beat Cardinals 6-4 to extend NLCS (10/2013): It took the Dodgers five games to hit a home run in the NL championship series. Once Adrian Gonzalez powered up for the first...

Zack Greinke still rolling, but gets no support in Dodgers' 1-0 loss (09/2013): Matt Kemp was a late scratch because his left ankle was sore. The Dodgers called the move precautionary, but it is the same ankle that forced him to sit out 53 games.

Zack Greinke analyzes the Dodgers lineup (06/2013): Zack Greinke gave up four earned runs on 12 hits over seven innings for the Dodgers while striking out five Philadelphia batters in L.A.'s 6-4 victory.

Believe Padres CEO is sorry for Zack Greinke 'Rain Man' comment? (04/2013): It’s a new world out there, which Mitt Romney and the 47% could tell you, but some are a little slow to embrace, or at least recognize.

Bob Haynie: Zack Greinke Speaks The Truth (02/2013): You have to love honesty. In the sporting world, during interviews, often times athletes and team leaders will give you coach-speak, cliches, phrases and politically correct answers.

I before E -- except as in Zack Greinke of the Angels (09/2012): Angels starter Zach Greinke pitched just well enough Sunday against the Rangers, going 7 1/3 innings while giving up four runs, to keep his club in the game.

ANAHEIM, Calif. -- Zack Greinke yielded five hits over seven strong innings, Alb (08/2012): Mark Trumbo and pinch-hitter Alberto Callaspo drove in runs in the third inning for the Angels, who stayed in the AL wild-card hunt by winning all six meetings with Boston over the past 10 days.

Report: Brewers will trade Zack Greinke without long-term deal (06/2012): One of Major League’s Baseball’s top pitchers could be on the market before long. FOX Sports reports that the Milwaukee Brewers intend to trade starting pitcher Zack Greinke if they can’t agree a long-term deal with the former Cy Young award winner.

Zack Greinke still agentless, yet open to extension (01/2012): Zack Greinke, who left CAA Sports last year and is currently without an agent, said he is open to doing a new deal with the Brewers this winter. “I’ll talk to them about it,” he told MLB.com. “I don’t really want to talk to anyone else about it. But I like the business of baseball.…

With free agency one year away Zack Greinke has left his agent for … no one (12/2011): Jerry Crasnick of ESPN.com reports that Zack Greinke left his representatives at CAA and is currently without an agent. Greinke has one season left on his contract and will hit the open market next offseason ready to cash in for a huge deal, so every agent in the business would love to nab him as…

Zack Greinke, Brewers gain on Cardinals (06/2011): The last time Chris Carpenter got off to such a rocky start to a season, he was a rookie in Toronto -- 14 years ago.