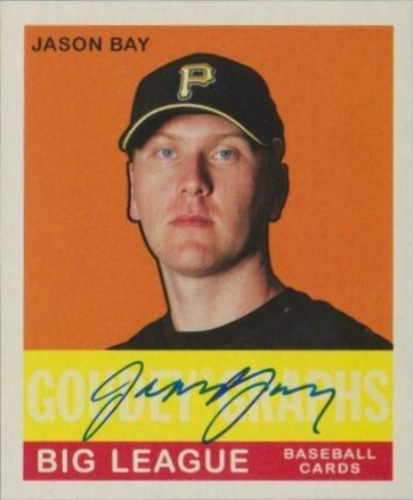 Current items with a signature of Jason Bay

These are the most current items with a signature of Jason Bay that were listed on eBay and on other online stores - click here for more items.

Traded items with a signature of Jason Bay

If you're interested in Jason Bay Rookie cards you might want to take a look at our sister site that specializes in Baseball Rookie Cards only.

The most expensive item with a signature of Jason Bay (2012 NEW YORK METS TEAM SIGNED AUTO BASEBALL BALL JASON BAY RA DICKEY COA) was sold in July 2012 for $500.00 while the cheapest item (2005 Fleer Platinum #24 Jason Bay signed/autographed card Pittsburgh Pirates) found a new owner for $0.49 in March 2013. The month with the most items sold (84) was August 2008 with an average selling price of $35.00 for an autographed item of Jason Bay. Sold items reached their highest average selling price in December 2015 with $99.00 and the month that saw the lowest prices with $0.99 was August 2022. In average, an autographed item from Jason Bay is worth $14.99.

Most recently, these items with a signature of Jason Bay were sold on eBay - click here for more items.

Pirates Insider: Pirates lose to Twins in 13th on Mauer's homer (05/20/15): 61. Home runs McCutchen has hit at PNC Park, tying Jason Bay for the most since the facility opened in 2001. *Catcher Francisco Cervelli returned to the lineup and went 0 for 4 with a walk and a strikeout. He was removed from Tuesday night’s game prior ...

Mauer's 13th-inning homer leads Twins over Bucs (05/20/15): 098 hitter (26-for-265) during his seven years with the Mets. McCutchen's home run was his 61st at PNC Park, tying him with Jason Bay for the ballpark's all-time lead. Twins: The Twins have a day off on Thursday before heading to Chicago for a three-game ...

Time for the NY Mets to clear the way for young pitching by trading Jon Niese (05/20/15): Niese, for all his talent and solid numbers, offers none of those qualities. He stands as a reminder of drearier days around here -- of black uniform tops, Jason Bay in left field, and empty seats at Citi. Harvey, Syndergaard, Jacob deGrom and Matz ...

Mauer's 13th-inning homer spells doom for Pirates in home loss (05/19/15): The homer, McCutchen's fifth of the season, tied the score at 3-3. It also moved the McCutchen into a first-place tie with former Pirate Jason Bay for home runs at PNC Park; both have 61. McCutchen's run added to a late-game rally started by Jose Tabata ...

Pirates Insider: Pirates lose to Twins in 13th on Mauer's homer (05/2015): 61. Home runs McCutchen has hit at PNC Park, tying Jason Bay for the most since the facility opened in 2001. *Catcher Francisco Cervelli returned to the lineup and went 0 for 4 with a walk and a strikeout. He was removed from Tuesday night’s game prior ...

The only hope of keeping Granderson from Jason Bay territory (03/2015): PORT ST. LUCIE — Rebuilding Grandy. The sequel. Curtis Granderson is deep into renovating his swing with old friend and new Mets hitting coach Kevin Long. Progress is being made....

Mets goat Jason Bay plans to retire (01/2014): Former Mets outfielder Jason Bay — the man fans in Flushing loved to boo — is likely to retire, according to a report. The 35-year-old Bay told Shi Davidi of...

Mariners recall Michael Morse, DFA Jason Bay (07/2013): Michael Morse has been recalled from his rehab assignment in Tacoma and will join the Mariners in Boston on Tuesday for their upcoming road trip, which also includes a series in Baltimore.

Jason Bay’s hamstring improves, but he sits (06/2013): Jason Bay was out of the lineup again, the fourth consecutive day he was unavailable to play. But there is progress being made with his sore hamstring.

Why Mariners will proceed with caution on Jason Bay (05/2013): Jason Bay has given the Mariners a very interesting “problem” to deal with. It’s the kind of problem the team will be happy to face, given the real problems they’ve had to deal with already this season. You see, Bay looks to be pretty close  to his old self numbers-wise,

B&C Morning Show: Jason Bay’s Rediscovery (02/2013): Boomer suggested the Bombers contact the Mariners with regards to obtaining the services of one Jason Bay, who apparently has rediscovered his swing for Seattle.

Report: OF Jason Bay reaches deal with Mariners (01/2013): NASHVILLE, Tenn. A person familiar with the deal tells The Associated Press that free agent outfielder Jason Bay has reached a one-year contract with the Seattle Mariners.

Jason Bay low risk, but Mariners need more (12/2012): A relaxed and seemingly robust Jason Bay made such a positive impression Monday in his Seattle media unveiling, it was hard not to imagine a best-case scenario in his quest for a career revival. Bay is a perfect reclamation candidate.

Report: Red Sox Among Teams Talking With Jason Bay (11/2012): With gaping holes in the outfield, the Boston Red Sox seem to be exploring any option out there.

Mets outfielder Jason Bay held out of lineup with back stiffness (09/2012): Bay hasn't played since Saturday

Coutinho: The Clock Ran Out On Jason Bay (08/2012): Jason Bay could read the handwriting on the wall as his average continued to slip and his at-bats became more and more painful to watch.

Former Zag Jason Bay Still Out With Concussion (06/2012): Former Gonzaga great Jason Bay was scheduled to visit a doctor on Tuesday to find out just how serious his latest concussion is.

Mets Beat Marlins and Put Mike Pelfrey and Jason Bay on D.L. (04/2012): It seemed like old times for the Mets: Jose Reyes was on the field, and two players were put on the disabled list before the team scratched out a 2-1 victory over the Marlins.

Mets' Jason Bay trying to find right balance | Baseball (03/2012): After struggling mightily during the first two seasons of a four-year, $66 million contract with the Mets, the 33-year-old's patience is being tested.

On his birthday, Mets outfielder Jason Bay needs day off due to illness (09/2011): Mets arrive in St. Louis for final road series

B&C Morning Show: Mets’ Jason Bay Takes A Rest, Craig Blows A Gasket (05/2011): After a beautiful holiday weekend, Boomer & Craig were back in the saddle again this morning and they got things started by talking about the Mets, who after dropping 2 of 3 to the Phillies, belted out 15 hits in a 7-3 win over the Pirates on Monday.

Coutinho: Don’t Understate Jason Bay’s Value To Mets (04/2011): Don't think for a moment Jason Bay's return and the Mets' 4-game winning streak are mutually exclusive events. The offensive cause-and-effect of his return to the Mets' lineup cannot be overstated.

After ‘Frustrating’ 2010, Jason Bay Ready To Power Mets (02/2011): Mets outfielder Jason Bay is just happy to be back on the baseball field. "I take a lot of pride in getting out there every day good or bad and trying to play a certain way," he said Sunday.