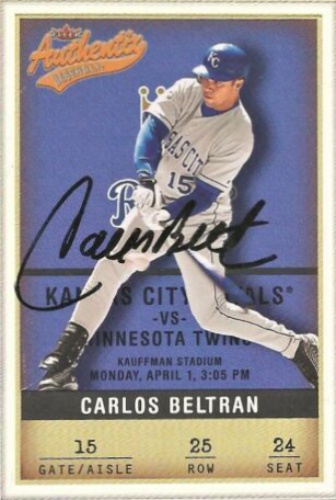 Current items with a signature of Carlos Beltran

These are the most current items with a signature of Carlos Beltran that were listed on eBay and on other online stores - click here for more items.

Traded items with a signature of Carlos Beltran

If you're interested in Carlos Beltran Rookie cards you might want to take a look at our sister site that specializes in Baseball Rookie Cards only.

Most recently, these items with a signature of Carlos Beltran were sold on eBay - click here for more items.

Despite Carlos Beltran's hopes, Yankees and Aaron Judge have not agreed on contr (04/04/22): Carlos Beltran initially seemed to imply an Aaron Judge extension was done during the broadcast Monday, but false alarm Yankee fans.

Carlos Beltrán walks back comments about Aaron Judge's contract following gaffe (04/04/22): Beltrán briefly appeared to be alerting others about a signing before they were supposed to know

'We did cross the line': Carlos Beltran talks Astros' cheating scandal ahead of (04/03/22): Speaking with Michael Kay on Centerstage, Carlos Beltran was asked if there was a stain on that championship due to the Astros sign-stealing scheme.

Carlos Beltrán opens up about Astros' sign-stealing scandal, says title is stain (04/03/22): Beltrán also questioned why he was the only player named in MLB's report about Houston's scheme

Carlos Beltrán returns to baseball as Yankees television analyst with the YES Ne (01/29/22): It is Beltrán's first job in baseball since his stint as Mets manager can to an abrupt end

Could the signing of Max Scherzer convince more free agents to come to the Mets? (12/2021): On Baseball Night in NY, former Mets GM Omar Minaya says the team's dramatic free-agent signings were similar to the off-season in 2004 when he signed Pedro Martinez and Carlos Beltran. It changed other players' perspective on wanting to come to NY. Minaya: "You will see other free agents want to co

Will Carlos Beltrán get second chance as MLB manager? 'Hopefully that happens,' (10/2021): Alex Cora, after being suspended in 2020, is facing some of Beltrán's old Astros teammates in the ALCS

Samson: Should Alex Cora and Carlos Beltran really be the only scapegoats in Ast (06/2020): David Samson weighed in on Cora's recent comments

David Samson wonders if Carlos Beltran had to leave the Mets in the fallout of t (05/2020): David Samson sits down to discuss Beltran's departure from the Mets

Will Alex Cora, AJ Hinch or Carlos Beltran manage again? MLB insiders explain wh (04/2020): Hinch and Cora are both suspended for the 2020 season

How Astros cheating scandal will affect Carlos Beltran's Hall of Fame chances (02/2020): Beltran will be on the ballot for the first time in 2023

Luis Rojas and the Mets Embrace Their Second Chance (01/2020): Passed over last fall in the Mets’ search for a manager, Rojas will take over the team now that Carlos Beltran is gone.

MLB rumors: Mets entering final phase of managerial interviews; Eduardo Perez, C (10/2019): The Mets are nearing the end of their hunt for a new skipper

Yankees' Carlos Beltran: My elbow's getting better (01/2015): The 37-year-old right fielder says he feels young when he's in the gym

Yankees' Carlos Beltran should have had surgery earlier, Brian Cashman says (11/2014): Instead, Beltran suffered through a full season — his worst ever — and had surgery to remove a bone spur Sept. 30

How Carlos Beltran helped Kolten Wong go from playoff goat to hero (10/2014): SAN FRANCISCO — Imagine making the last out of a World Series game by getting picked off first base as a pinch-runner. That happened to the Cardinals’ Kolten Wong in...

Carlos Beltran had elbow surgery (09/2014): He should be good to go by spring training.

Carlos Beltran's cranky elbow means a return for Zelous Wheeler (08/2014): Right-handed hitter will give Yanks flexibility as they face a number of lefty opposing starters in the next few days

Carlos Beltran speaks out against lack of interpreters for Spanish-speaking majo (04/2014): Beltran called Michael Pineda not having a translator assist him during his media firestorm this week 'a problem'

Carlos Beltran appears to top Royals’ revised off-season wish list (11/2013): Whenever and wherever the hard bargaining starts for free-agent outfielder Carlos Beltran, the Royals want a seat at the table. How long they stay there depends on how rich the bidding becomes.

Feldman: Here's hoping for the return of Carlos Beltran in '14 (06/2013): It's no secret Cardinals RF Carlos Beltran is a free agent at the end of the year. It's even less of a secret the Cards have a top flight prospect knocking on the door of the big leagues in AAA-Memphis (see: Taveras, Oscar).

Is Carlos Beltran a Hall of Famer? Most agree: Maybe (05/2013): Carlos Beltran, who is in his second year with the Cardinals, began his successful career with the Royals, winning Rookie of the Year honors while playing here from 1998-2003. But is he a Hall of Fame candidate? A quick survey of national baseball writers found unanimity: Maybe.

Player Giants traded for Carlos Beltran to face Fresno Grizzlies (04/2013): It was just a couple of years ago that pitcher Zack Wheeler was considered the San Francisco Giants' top prospect.

Carlos Beltran somehow live-tweets going to bed (03/2013): Being Carlos Beltran must take a lot out of a guy. You've got to keep your core and knees strong so you can continue being awesome at baseball, plus you really need to focus on your stamina so you can maintain the best OPS in postseason history come October.

Another Game 7 Opportunity for Cardinals’ Carlos Beltran (10/2012): In 2006 Carlos Beltran, now the Cardinals’ slugging right fielder, froze on a called third strike to end the Mets’ season in Game 7 of the N.L.C.S.

ST. LOUIS -- Carlos Beltran homered from both sides of the plate for the ninth t (09/2012): St. Louis (86-74) took a 7-0 lead by the third inning and reduced its magic number for clinching to two, pending the game later Sunday between the Los Angeles Dodgers (83-75) and Colorado.

ST. LOUIS -- Lance Lynn won his 12th game with six spotless innings, and Matt Ho (07/2012): homered on consecutive pitches to put the finishing touches on the St. Louis Cardinals' 7-0 victory Sunday that completed a three-game sweep of the Chicago Cubs.

2006 Heartache? Carlos Beltran Says Get Over It, Mets Fans (01/2012): Beltran had some fine moments in New York. But he had one really, really bad one. And Mets fans haven't forgotten about it.

Carlos Beltran signs with Cardinals (12/2011): The end of Carlos Beltran's short Giants tenure was old news. The only question was which team would give him the money the Giants declined to spend. The answer is the St. Louis Cardinals, who had a big hole in their...

Carlos Beltran sees need atop SF Giants' order (09/2011): The Giants will need a leadoff hitter next year who consistently gets on base and wreaks havoc ahead of the big hitters. This is not news to fans, but that deficiency has made an impression on right fielder Carlos...

Carlos Beltran Returns from DL (08/2011): Carlos Beltran returned from the disabled list on Tuesday, but he was only available as a defensive replacement.

KNBR Conversation with Carlos Beltran (07/2011): The following is an edited excerpt from a KNBR interview conducted Friday with new Giants right fielder Carlos Beltran: Q: You were in Cincinnati with the Mets. You took your team out to dinner there. Now you're back in...

Schwei: Mets’ Carlos Beltran Joins 800 Club (06/2011): Carlos Beltran leads the Mets in home runs and runs batted in so far in 2011, but he also leads the club in games played this season and last week, Beltran appeared in his 800th career game with New York.

Mets' Carlos Beltran could preserve knee with move to right field (02/2011): PORT ST. LUCIE, Fla. — The last time Carlos Beltran remembers playing right field on a regular basis, he was an 18-year-old kid, sent by the Kansas City Royals to man the corner in the Puerto Rican Winter League. After the winter ended, he moved back to center field, a position he mastered.

Scott Boras hushes Carlos Beltran noise (12/2010): LAKE BUENA VISTA, Fla. – Scott Boras may be the greatest salesman in baseball, even if some of the executives who line up across the table from him might use other descriptive words for the agent.