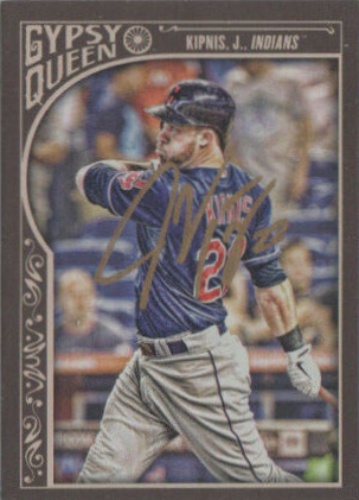 Jason Michael Kipnis (born April 3, 1987; nicknamed "Kip") is an American professional baseball second baseman who is a free agent. He has played in Major League Baseball (MLB) for the Cleveland Indians and Chicago Cubs. He attended Glenbrook North High School in the suburbs of Chicago where he earned three letters playing baseball for the Glenbrook North Spartans. He attended the University of Kentucky, but transferred to Arizona State University after two years. In college, Kipnis was an All-American and the 2009 Pacific-10 Conference Player of the Year for the Sun Devils. More about Jason Kipnis

Current items with a signature of Jason Kipnis

These are the most current items with a signature of Jason Kipnis that were listed on eBay and on other online stores - click here for more items.

Traded items with a signature of Jason Kipnis

The most expensive item with a signature of Jason Kipnis (Jason Kipnis GAME USED 2016 WORLD SERIES HAT signed WORN autograph Indians) was sold in April 2020 for $499.95 while the cheapest item (2013 Panini Select Baseball Jason Kipnis Signature auto #JA) found a new owner for $0.99 in January 2022. The month with the most items sold (24) was November 2016 with an average selling price of $64.99 for an autographed item of Jason Kipnis. Sold items reached their highest average selling price in June 2016 with $179.99 and the month that saw the lowest prices with $1.25 was July 2019. In average, an autographed item from Jason Kipnis is worth $20.00.

Most recently, these items with a signature of Jason Kipnis were sold on eBay - click here for more items.

Braves invite 2B Kipnis to join spring training (02/16/21): Two-time All-Star second baseman Jason Kipnis is one of 25 non-roster players who have been invited by the Braves to spring training.

Jason Kipnis returns Thursday, Bruce Chen stays: Cleveland Indians notes (03/25/15): Jason Kipnis went to the minor league side of the Indians complex Wednesday to play five innings of defense and get some at-bats. He's scheduled to play in a Cactus League game Thursday after missing seven games with back spasms.

Cleveland Indians will go as Jason Kipnis goes in 2015 -- Bud Shaw's Sports Spin (03/09/15): The Cleveland Indians have the pitching to make the playoffs in 2015. The rest depends on the offense, and nothing could boost it more than a bounce-back year from second baseman Jason Kipnis.

Cleveland Indians Jason Kipnis needs fresh start with his old swing (03/08/15): A decision following his All-Star season in 2013 to get bigger and stronger backfired on Indians second baseman Jason Kipnis. After a lost season, Kipnis is trying to rediscover his swing following surgery on the ring finger of his left hand.

Would you trade Jason Kipnis and David Murphy? Hey, Hoynsie! (10/2014): Is it time for the Indians to make a blockbuster trade in order to create some payroll space to sign free agent Victor Martinez?

Carlos Carrasco, Jason Kipnis, Yan Gomes lead Cleveland Indians past New York Ya (08/2014): The Indians won a season series against the Yankees for the first time since 2008.

Asdrubal Cabrera returns, Jason Kipnis rests, Lonnie Chisenhall still ill: Cleve (07/2014): Center fielder Michael Bourn, recovering from a strained left hamstring, will increase the intensity of his running this week. It's still not know when he might go out on a rehab assignment or how long it would last.

Jason Kipnis still trying to make hard contact for Cleveland Indians (06/2014): Jason Kipnis' mad dash around the bases in the 13 inning Tuesday night didn't end in an inside-the-park home run, but it did count as a triple. So perhaps that will trigger the missing power from Kipnis' swing.

Cleveland Indians' Jason Kipnis: an All-Star made, not born - Bud Shaw (03/2014): In four short years, Jason Kipnis made the transition from the outfield in the minors to All-Star second baseman and face of the franchise. His career track -- quick success and continued improvement -- should ease the Indians' concern as they explore signing him to a long-term contract.

Albert Chen: Overlooked early on, Jason Kipnis leads 2014 All-Underrated Team (02/2014): Want to know where the chip comes from? Why the most underrated and underappreciated player in baseball runs to first base

AL roundup: Jason Kipnis leads Indians past White Sox, 19-10 (06/2013): Jason Kipnis reached base six times and scored four runs, Ryan Raburn homered and drove in four, and the Cleveland Indians rallied from five down early on to pound the Chicago White Sox, 19-10, in Game 1 of a doubleheader Friday.

Sheldon Ocker: Decisions due sooner on Mark Reynolds, Jason Kipnis, others rathe (05/2013): It’s never too early to worry about next year. That goes for the Indians, who uncharacteristically will have more good things than bad things to worry about.

Five myths about Brandon Weeden, Jason Kipnis against lefties and Cavs expectati (02/2013): Here are what blogs from Cleveland and around the country are saying about the Browns, Cavaliers and Indians. Featured today are Dawgs By Nature, It's Pronounced Lajaway and Fear the Sword.

Jason Kipnis has high hopes for new-look Cleveland Indians (01/2013): The last few years, the Indians went into spring training hoping they could win.

Latest loss not Pat Shurmur's fault, Jason Kipnis is core member and Tristan Tho (10/2012): Here are what blogs from Cleveland and around the country are saying about the Browns, Cavaliers and Indians. Featured today are Dawg Pound Daily, Did The Tribe Win Last Night? and Stepien Rules.

Jason Kipnis getting his game up to speed: Cleveland Indians Insider (08/2012): The second baseman has 26 steals this season, including three on Sunday against the Yankees.