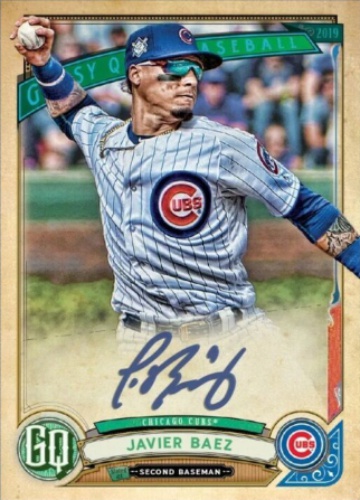 Ednel Javier Báez (born December 1, 1992), nicknamed "El Mago" (Spanish for "The Magician"), is a Puerto Rican professional baseball shortstop for the Detroit Tigers of Major League Baseball (MLB). He previously played in MLB for the Chicago Cubs and New York Mets. Born in Puerto Rico, Báez attended high school in Jacksonville, Florida. The Cubs selected Báez with the ninth overall selection of the 2011 MLB draft. He made his MLB debut in 2014. More about Javier Baez

Current items with a signature of Javier Baez

These are the most current items with a signature of Javier Baez that were listed on eBay and on other online stores - click here for more items.

Traded items with a signature of Javier Baez

If you're interested in Javier Baez Rookie cards you might want to take a look at our sister site that specializes in Baseball Rookie Cards only.

The most expensive item with a signature of Javier Baez (JAVIER BAEZ SIGNED GAME ISSUED CUBS BATTING HELMET AUTOGRAPH MLB AUTH JAVY AUTO) was sold in December 2020 for $1399.99 while the cheapest item (2018 Topps Bunt Holiday Javier Baez Signature Relic *Digital Card*) found a new owner for $0.75 in February 2019. The month with the most items sold (37) was August 2021 with an average selling price of $80.00 for an autographed item of Javier Baez. Sold items reached their highest average selling price in February 2017 with $185.00 and the month that saw the lowest prices with $3.99 was June 2012. In average, an autographed item from Javier Baez is worth $53.00.

Most recently, these items with a signature of Javier Baez were sold on eBay - click here for more items.

Detroit Tigers' Javier Báez offers help to Puerto Rico after Hurricane Fiona imp (09/20/22): Báez is from Puerto Rico and his hometown of Bayamón has seen landslides and heavy flooding

Tigers place Javier Báez on injured list as shortstop continues to deal with thu (04/16/22): Báez joins Casey Mize as notable Tigers to be placed on the shelf this weekend

Mets are still searching for earring lost by Javier Baez on game-winning run (09/2021): What a week it has been for the Mets

Javier Báez completes Mets' comeback win after apologizing for thumbs down gestu (08/2021): Báez, booed in the eighth inning, was a hero in the ninth and fans flipped their thumbs after a crazy comeback

Javier Báez trade: Mets acquire Cubs star in trade deadline blockbuster, per rep (07/2021): Báez heads to the Big Apple, where he'll fill in at shortstop for a bit

Cubs' Baez benched in loss: Lost track of the outs (06/2021): Cubs shortstop Javier Baez was benched by manager David Ross after forgetting how many outs there were and getting doubled off first base in the fourth inning of Monday's loss to the Indians.

Cubs' Javier Báez hits grand slam, bats left-handed in blowout victory vs. Mets (04/2021): Báez hasn't had his best season to date, but he's among the game's most entertaining players for a reason

MLB hitters who are missing their age-27 peak season in 2020 (06/2020): Big things were in store for Gary Sanchez, Javier Baez and other young stars, but instead they're losing time at the top of their games.

What a Javier Baez extension could look like as Cubs reportedly negotiate new de (11/2019): The Cubs are coming off their first postseason-less season since 2014 but might soon lock up a key piece

Vladimir Guerrero Jr., Javier Baez Are Among The Biggest Risk/Reward Players of (02/2019): Do you think that Vladimir Guerrero Jr. will live up to his enormous hype? If you do, you'll need to spend a fourth-round pick to get him. He may be the most polarizing of the 2019 crop of high-risk/high-reward players.

Blind Battle: Javier Baez vs. Ian Happ (01/2019): Heath takes a "blind" look at this pair of Cubbies, who are more similar than you might think.

MLB Daily Fantasy Review: Most Bang for Your Buck (Javier Baez) and Biggest Flop (12/2018): Reviewing DFS Players Based on Who Exceeded Expectations the Most and Who Flopped the Most

Levine: Javier Baez’s Destination Is An Organization-Wide Decision (03/2015): Maddon isn't as worried about Baez's strikeouts as others are.

Strikeouts a battle for Cubs' Javier Baez (10/2014): Madison Bumgarner’s dissection of the Pirates in the National League wild-card game Wednesday night was reminiscent of what the Giants’ prized left-hander did to Cubs rookie Javier Baez during an Aug. 20 game at Wrigley Field.