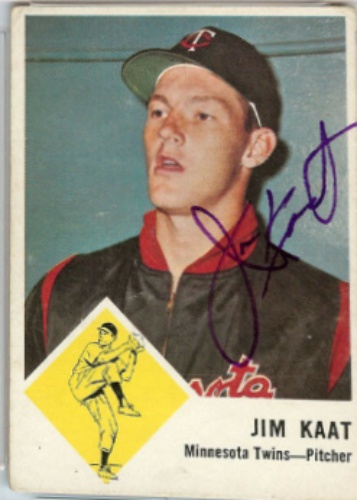 Current items with a signature of Jim Kaat

These are the most current items with a signature of Jim Kaat that were listed on eBay and on other online stores - click here for more items.

Traded items with a signature of Jim Kaat

If you're interested in Jim Kaat Rookie cards you might want to take a look at our sister site that specializes in Baseball Rookie Cards only.

Most recently, these items with a signature of Jim Kaat were sold on eBay - click here for more items.

Yankees' Cortes says Kaat apologized for remark (06/04/22): Jim Kaat has apologized to Nestor Cortes, with the Yankees left-hander tweeting Friday that he doesn't believe the comment made a night earlier by the longtime Minnesota Twins announcer was done with ill intentions.

Twins to retire number for Hall of Fame-elected Kaat (01/13/22): The Minnesota Twins will be retiring Jim Kaat's No. 36 after he was recently elected to the Baseball Hall of Fame by the the Golden Days Era Committee.

Twins will retire Hall of Famer Jim Kaat's No. 36 jersey this season (01/12/22): Minnesota will honor the Hall of Fame pitcher in a ceremony on July 16

Twins to honor Kaat, retire HOF lefty's No. 36 (01/2022): The Twins will retire No. 36, the uniform number of former pitcher Jim Kaat, who was recently elected to the Hall of Fame.

For Jim Kaat, a golf game that cuts both ways (01/2014): The best switch-hitter in baseball history? Jim Kaat — if you’re talking golf. The ex-pitcher, 75, recently shot his age both ways — a 75 playing right-handed and a 70 left-handed — while playing two rounds simultaneously at the McArthur Golf Club course near his home in Stuart, Fla.

GolfDigest.com: Stuart resident Jim Kaat believed to be first golfer to shoot hi (12/2013): Jim Kaat shoots his age (75) from both sides, the latest as a right-hander on Dec. 7 at McArthur Golf Club in Hobe Sound

Jim Kaat donates baseball memorabilia to Zeeland facility (09/2013): Jim Kaat has been a Zeeland icon for decades. The former major league pitcher is the top athlete in the history of the city. But that isn't what makes him an icon. Kaat's loyalty to his hometown and contributions to it are what sets him apart.

Ray McNulty: Jim Kaat tells different side to Greg Norman's battle with Medalist (05/2013): When Jim Kaat’s eyes saw the front page story about Greg Norman and his despute with a country club he co-founded, he couldn’t believe what he was seeing.

Ray McNulty: Jim Kaat takes Hall of Fame vote in stride (12/2011): Imagine spending more than 50 years in baseball — 25 as a major league pitcher who won 283 games and 16 consecutive Gold Gloves — and falling two votes shy of election to the Hall of Fame.

Ray McNulty: Blyleven may set Hall stage for his friend, Jim Kaat (01/2011): Their friendship began 40 years ago, when Bert Blyleven was a promising rookie pitcher and Jim Kaat was 10 years into a major-league career that spanned 25 seasons during which he faced 19,023 batters in 4,530 innings in 898 games.