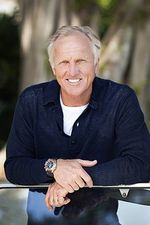 Gregory John Norman AO (born 10 February 1955) is an Australian entrepreneur and retired professional golfer who spent 331 weeks as the world's Number 1 Official World Golf Rankings ranked golfer in the 1980s and 1990s. He won 89 professional tournaments, including 20 PGA Tour tournaments and two majors: The Open Championships in 1986 and 1993. Norman also earned thirty top-10 finishes and was the runner-up 8 times in majors throughout his career. He was inducted into the World Golf Hall of Fame in 2001 with the highest percentage of votes (80%) of any golfer to date. In a reference to his blond hair, size, aggressive golf style and his birthplace's native coastal animal, Norman's nickname is "The Great White Shark" (often shortened to just "The Shark"), which he earned after his play at the 1981 Masters. More about Greg Norman

Current items with a signature of Greg Norman

These are the most current items with a signature of Greg Norman that were listed on eBay and on other online stores - click here for more items.

Traded items with a signature of Greg Norman

The most expensive item with a signature of Greg Norman (AUTHENTIC SIGNED GREG NORMAN UNUSED KING COBRA 9.5 DRIVER, ONE OF A KIND!) was sold in April 2022 for $950.00 while the cheapest item (Greg Norman Signed Postcard - Autographed - Auto) found a new owner for $0.01 in September 2008. The month with the most items sold (32) was July 2008 with an average selling price of $19.74 for an autographed item of Greg Norman. Sold items reached their highest average selling price in June 2018 with $259.99 and the month that saw the lowest prices with $2.25 was September 2019. In average, an autographed item from Greg Norman is worth $20.00.

Most recently, these items with a signature of Greg Norman were sold on eBay - click here for more items.

PGA Tour Denies Golfers Waivers for Saudi-Backed Tournament (05/11/22): The tour has made it clear it will suspend players who defect to Greg Norman’s rival LIV Golf series, which is set to make its debut in England next month.

Greg Norman 'disappointed' after being denied special exemption into 150th Open (05/05/22): Norman will not be in the field this summer after his exemption was denied by the R&A

Greg Norman Knows About Golf and Golf Homes (04/01/22): The former player shared his perspective on emerging golf locales and what makes an ideal golf home today.

Greg Norman to serve as commissioner of golf league hoping to begin play in 2022 (10/29/21): Norman's association makes him the face of the Saudi-funded golf group looking to compete with the PGA Tour

Greg Norman tests positive for COVID-19 after playing in PNC Championship with h (12/28/20): The Shark has the virus and is back home after a hospital stay

The Bluffs in Vietnam a New Greg Norman Design (10/2014): Greg Norman predicts The Bluffs is destined to become one of the world's top golf courses. Speaking at the much-anticipated opening of the links course, the Australian said, "I absolutely believe The Bluffs has the potential to be one of the top courses in the world.

Greg Norman snubs farewell at The Open due to sponsors wrangle - WORLD OF GOLF, (03/2014): DEREK LAWRENSON: The Open Championship at St Andrews next year appeared the perfect place for Greg Norman to wave goodbye, stopping — like the legends before him — on the Swilcan Burn for the obligatory farewell photo of a lifetime.

Video: Greg Norman on golf career: I was stubborn (08/2013): Golf legend and two-time British Open champion, Greg Norman, joins "CBS This Morning" to talk about his successful career as an entrepreneur and being on the golf course.

The Open 2013: Tiger Woods, Greg Norman, Tom Watson best championship moments (07/2013): The 142nd Open Championship will be staged at Muirfield next week. Here, Sportsmail picks out five of the most memorable in the tournament's long history.

Playing 18 Holes With Greg Norman (06/2013): The Shark talks about his career, his business and his love of adventure.

Larry Bohannan: Could Greg Norman's words lead to policy change? (04/2013): When an athlete in a sport starts discussing how the drug testing in the sport doesn't go far enough, it might be time to sit back and listen.

China hires Greg Norman to groom golfers for 2016 Olympics (03/2013): China is turning to Greg Norman to identify and coach its best players for the Olympics.

Wine of the Week: Greg Norman Shiraz 2008 (02/2013): Legendary golfer Greg Norman owns no vineyards and is not a winemaker. But he has licensing arrangements around the world to create his wines, including this one from his home country of Australia.

On the spot with Greg Norman (12/2012): FOR a sports fan who has spent most of his career writing about business and interviewing chief executives, interviewing Greg Norman, Australia’s greatest golfer, was always going to be a highlight. And it was.

Lee Westwood to play Greg Norman for short-game returns - Derek Lawrenson (11/2012): Where next for Lee Westwood in his search for salvation on and around the greens? Here’s an eye-catching name - Greg Norman.

Greg Norman talks Tiger, Ryder Cup (09/2012): Before Jack Nicklaus won the 1986 Masters, Greg Norman remembers the story about Nicklaus being motivated by a newspaper article, which called him...

No chokers at the Olympics: Greg Norman (07/2012): A bronze medal at the Olympics makes you a hero, whereas a third place finish at golf earns you a choker label.

Business pull keeps Greg Norman off fairways (01/2012): This week's Humana Challenge is first PGA Tour start since 2009 Sure, Greg Norman says, there are days when he entertains the idea of competing a little more often on the golf course. And then he remembers the one thing that always stands in the way of actually following through on the impulse.

Greg Norman disses Tiger Woods repeatedly (10/2011): Let there be no doubt: Tiger Woods hears what Greg Norman is saying. But can he do anything about it? Does he still have enough game, enough fight, enough champion's pride to make Norman choke on his words? read more

Greg Norman on why his Presidents Cup team is dangerous, and why Tiger will neve (09/2011): The Presidents Cup will be a home game for International captain Greg Norman, but that's not the only reason he's bullish about his boys' chances against the U.S. As for Tiger, the Shark says he won't win another major.

Harig: Greg Norman imparts wisdom on Rory McIlroy (05/2011): In preparing to make his first start in the US since his Masters meltdown, Rory McIlroy revealed some advice he got from a golf legend who knows a thing or two about heartbreak at Augusta National, writes ESPN.com's Bob Harig.

Greg Norman relives pain of Augusta collapse (04/2011): Greg Norman said he knows what Rory McIlroy must have gone through as his Masters dream was crushed with a closing 80 at Augusta.

Greg Norman has second surgery on his left shoulder, likely won't play until Jul (02/2011): Greg Norman had arthroscopic surgery Monday at the University of Pittsburgh Medical Center, mainly to repair a torn labrum.

Former golf No.1, Greg Norman, dropped from Australia's sports rich list (11/2010): SYDNEY: Former world golf No. 1 Greg Norman has been dropped from the list of Australia's top sports earners after 15 years because its compilers believe his income now derives more from business interests than sporting endeavors.