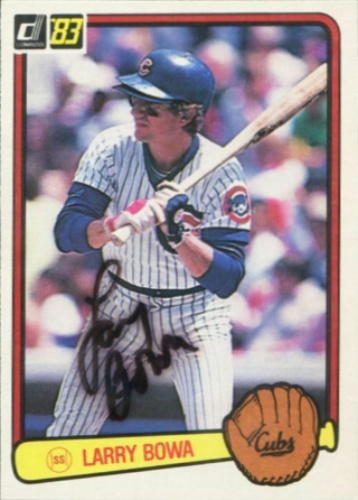 Lawrence Robert Bowa (born December 6, 1945) is an American former professional baseball shortstop, manager, and coach in Major League Baseball (MLB), who played for the Philadelphia Phillies, Chicago Cubs, and New York Mets. Bowa went on to manage the San Diego Padres and Phillies, and is currently a senior advisor to the general manager of the Phillies. More about Larry Bowa

Current items with a signature of Larry Bowa

These are the most current items with a signature of Larry Bowa that were listed on eBay and on other online stores - click here for more items.

Traded items with a signature of Larry Bowa

If you're interested in Larry Bowa Rookie cards you might want to take a look at our sister site that specializes in Baseball Rookie Cards only.

Most recently, these items with a signature of Larry Bowa were sold on eBay - click here for more items.

Larry Bowa: ‘Will Ferrell Best At First Base’ (03/12/15): Will Ferrell will play all nine positions for ten different MLB teams on Thursday.

Yankees' Alex Rodriguez criticized by Phillies' coach Larry Bowa (03/05/15): Hint: It had to do with A-Rod at the plate

The Philly 40: Larry Bowa (02/2014): Larry Bowa has filled just about every role possible with the Philadelphia Phillies.

Larry Bowa confident in Phillies chances (01/2014): After a 3 year hiatus, Larry Bowa had been itching to get back in the game.

5 Questions for Larry Bowa (08/2013): With the suddenly hot Yankees headed into Boston for a crucial weekend series, their former third base coach and current MLB Network analyst Larry Bowa talks postseason chances, a skinny Sabathia and A-Rod with The Post’s Justin Terranova. Q: Do you think the Yankees are capable of making a...

MLB Network’s Larry Bowa: Pirates Are Good Enough As Is (07/2013): MLB Network analyst Larry Bowa weighs in on the Pirates and the trading deadline with Vinnie & Cook on Sportsradio 93.7 The Fan.

Larry Bowa Dancing Almost Makes the World Baseball Classic Worth The Effort (03/2013): Larry Bowa broke out some moves he was saving for a summer on the Jersey Shore. Greg Maddux has seen it all before.

Larry Bowa Interviews for Marlins' Job (10/2012): A person familiar with the Miami Marlins' managerial search says they have interviewed Larry Bowa for the job.

Larry Bowa Won't Be Next Astros Manager (09/2012): The Houston Astros are looking for a new manager after firing Brad Mills in August, and reports on Tuesday confirmed the team was interviewing former Padres and Phillies manager Larry Bowa....

Leading Off: Larry Bowa's life is story of perseverance (02/2012): Larry Bowa's personality made for a lively show when he was in a major league baseball uniform, and he's still a draw for the MLB Network.

Former Phillies Manager Larry Bowa Previews WS Game 6 (10/2011): He's currently an analyst for the MLB Network but Larry Bowa has quite the baseball pedigree due to his managing of the Dodgers, Phillies and even NY Yankees

Felger & Mazz: Larry Bowa On Gambling In Baseball, Sox Down The Stretch (08/2011): Former manager and current MLB Network analyst Larry Bowa joined Massarotti and Bertrand to discuss gambling in baseball and the Red Sox down the stretch. Could we see a Red Sox-Phillies World Series?