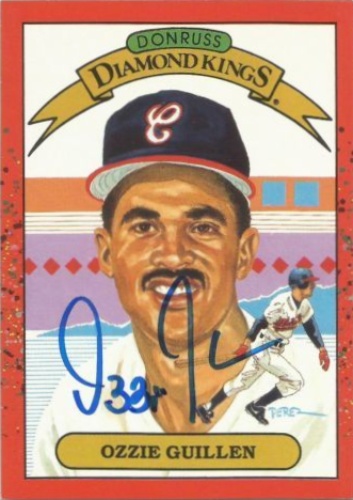 Oswaldo José Guillén Barrios (born January 20, 1964) is a former professional baseball player and manager. He played in Major League Baseball as a shortstop for 16 seasons, primarily with the Chicago White Sox, from 1985 to 2000. During that time, he won the American Rookie of the Year Award and also a Gold Glove. He was considered one of the best defensive shortstops of his era. Guillen later managed the Chicago White Sox from 2004 to 2011, winning the World Series in 2005 and then moving to the Miami Marlins in 2012. More about Ozzie Guillen

Current items with a signature of Ozzie Guillen

These are the most current items with a signature of Ozzie Guillen that were listed on eBay and on other online stores - click here for more items.

Traded items with a signature of Ozzie Guillen

If you're interested in Ozzie Guillen Rookie cards you might want to take a look at our sister site that specializes in Baseball Rookie Cards only.

The most expensive item with a signature of Ozzie Guillen (1/1 FIDEL CASTRO RAZOR LEGENDARY CUT SIGNED AUTO MASTERPIECE CUBA OZZIE GUILLEN) was sold in June 2012 for $810.02 while the cheapest item (Ozzie Guillen Personally Autographed Baseball Card!!!!) found a new owner for $0.01 in May 2010. The month with the most items sold (21) was August 2008 with an average selling price of $5.50 for an autographed item of Ozzie Guillen. Sold items reached their highest average selling price in November 2016 with $139.99 and the month that saw the lowest prices with $1.99 was July 2014. In average, an autographed item from Ozzie Guillen is worth $15.00.

Most recently, these items with a signature of Ozzie Guillen were sold on eBay - click here for more items.

White Sox to interview Ozzie Guillén for managerial vacancy, per report (10/21/22): Guillén was the White Sox manager from 2004-11, winning a World Series along the way

Ozzie Guillen hates Nick Swisher more than any of his other former players: 'His (08/07/20): Guillen managed Swisher for one season with the White Sox

Ozzie Guillen: 'I Would Like To Be Back' With White Sox (07/2014): Guillen certainly earned his bona fides while managing the Sox, but his 'Ozzie being Ozzie' routine wore thin the first time around. [ more › ]

Ozzie Guillen: The Man of the People (06/2014): Ozzie Guillen joins Sirott and Murciano and also Chicago Tribune’s Cheap Eater-Kevin Pang – to talk about his time in Chicago and the passion he has for the game. He also talks a little Spanish with Marianne and shares some …

Ozzie Guillen, Gene Lamont among a dozen names not likely being considered for D (10/2013): Here's a list of a dozen men who have been mentioned as potential successor to Leyland, but -- truth be told -- likely won't be considered to fill the Tigers' managerial opening.

Ozzie Guillen just wants to be involved (08/2013): Will somebody please hire Ozzie Guillen to save him from this shame. Say, I know of a team that is just killing time until the end of the year and just fired their manager.

Time for Ozzie Guillen to ride again (05/2013): Loading... The Marlins will still pay Guillen for the next three seasons, but idly collecting a paycheck isn't Guillen's style.

Marlins did blame Ozzie Guillen for this miserable season (11/2012): In the last issue of the Pinecrest Tribune, I urged the Miami Marlins to keep Ozzie Guillen at the helm. As if right on cue, the Marlins cut ties with Guillen a couple of days later.

Ozzie Guillen Says Firing Isn't Right Decision (10/2012): One day after being fired by the Marlins, ousted manager Ozzie Guillen didn't have time for a lengthy interview. For one thing, Guillen said he was in too big of a rush to get to Chicago, where he keeps his permanent home.

Miami Marlins’ Ozzie Guillen is irked by injured players delaying treatment (08/2012): Manager Ozzie Guillen made it clear Wednesday he doesn’t want to have a repeat of the 2012 season when lingering injuries kept some of his best players off the field and hurt the team.

Crap Of The Week: Ozzie Guillen (07/2012): This week's Crap of the Week goes out to former White Sox skipper Ozzie Guillen.

Ozzie Guillen and the Marlins sinking in the East (06/2012): Not what they expected: The Marlins and first-year manager Ozzie Guillen, shown May 17, had high hopes entering the season, but, nearing the All-Star break, they're trying to stay out of the National League East cellar.

Ringmaster Ozzie Guillen leads this circus that is the Miami Marlins (02/2012): That the circus had arrived was clear from the moment the ringmaster stood surrounded by his performers for a few introductory remarks Wednesday. Cameras were rolling. Ozzie Guillen didn’t give a [bleep].

Ozzie Guillen live managerial session with media (12/2011): Join us for some rockin' good fun with the manager of the most spend-happy team in baseball at these winter meetings. Mariners and MLB news and results. Sent daily, in season.

Ozzie Guillen To Bartman: “It’s Not Your Fault, The Cubs Sucked” (06/2011): Ozzie Guillen has some interesting things to say about the Steve Bartman and the 2003 Cubs. In an interview with something called GameSlam.com, the White Sox skipper set the record straight about what really happened at Wrigley that night.

Ozzie Guillen Lashes Out At Critics, Forgetful White Sox Fans (05/2011): TORONTO -- White Sox manager Ozzie Guillen doesn't want anyone to question his passion for winning and he lashed out at some Chicago fans for being forgetful of the team's recent success.

White Sox manager Ozzie Guillen suspended for tweets made during game, following (04/2011): Out tonight and Saturday for on-field actions in Wednesday's game against Yankees and for comments made via Twitter following his ejection. First time baseball penalizes player, coach or manager for use of Twitter during a game.