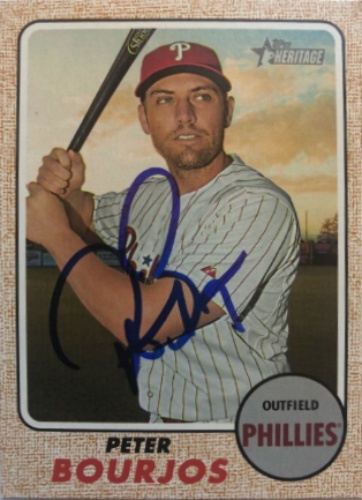 Current items with a signature of Peter Bourjos

These are the most current items with a signature of Peter Bourjos that were listed on eBay and on other online stores - click here for more items.

Traded items with a signature of Peter Bourjos

If you're interested in Peter Bourjos Rookie cards you might want to take a look at our sister site that specializes in Baseball Rookie Cards only.

The most expensive item with a signature of Peter Bourjos (Peter Bourjos Los Angeles Angels Anaheim Signed Full Size Bat PIC PSA/DNA COA) was sold in August 2012 for $89.99 while the cheapest item (2014 Topps Baseball Certified Authentic Autograph Peter Bourjos #TA-PB) found a new owner for $0.68 in December 2020. The month with the most items sold (13) was August 2011 with an average selling price of $18.00 for an autographed item of Peter Bourjos. Sold items reached their highest average selling price in March 2013 with $48.97 and the month that saw the lowest prices with $0.68 was January 2021. In average, an autographed item from Peter Bourjos is worth $10.75.

Most recently, these items with a signature of Peter Bourjos were sold on eBay - click here for more items.

Peter Bourjos is back with Angels, five years after pushing Mike Trout out of ce (03/11/19): Peter Bourjos is hoping to showcase his value to the Los Angeles Angels in his second stint with the team he says feels like home to him.

HumpLinks: Bourjos is Ballin’ (03/08/19): Peter Bourjos is tearing it up in ST. It’s hard to find anybody doing anything better on offense.

Cardinals complete sweep of Pirates on Peter Bourjos' walk-off single (09/03/14): Peter Bourjos singled home the winning run in the ninth inning, giving the St. Louis Cardinals a series sweep and their fifth straight win with a 1-0 victory over the Pittsburgh Pirates on Wednesday.

Game Log: Peter Bourjos picks up walk-off, Cards win 1-0 (09/03/14): ST. LOUIS — Yadier Molina coaxed a two-out walk in the bottom of the ninth to bring up Jon Jay. Adams and Peralta had both gone down on check swings, and Molina’s walk had come on a 3-2 count.

Cardinals complete sweep of Pirates on Peter Bourjos' walk-off single (09/2014): Peter Bourjos singled home the winning run in the ninth inning, giving the St. Louis Cardinals a series sweep and their fifth straight win with a 1-0 victory over the Pittsburgh Pirates on Wednesday.

Bird Bytes: Peter Bourjos season preview (03/2014): Greetings from Jupiter ... today we continue with my season preview on individual Cardinals, and as always we'll dig deep into the numbers to see what they tell us — good and bad.

Peter Bourjos injury: Angels OF needs wrist surgery, out for season (09/2013): Loading... "Checking a swing really bothered me, and I had a tough time staying on top of pitches. I didn't feel strong. If I have to load up on pills to get it to be manageble to where I can put a swing on the ball that is somewhat comfortable, that's not good."

Peter Bourjos injury: Angels OF leaves game after HBP with right wrist contusion (06/2013): Jordan Lyles hit Bourjos in the hand with pitch in the top of the fourth inning. Trainers inspected Bourjos' hand following the incident, but the outfielder stayed in the game to run.

Angels G.M. Jerry Dipoto: We have not offered Peter Bourjos to any other team (07/2012): Los Angeles Angels general manager Jerry Dipoto reiterated on Wednesday that he is not trying to trade outfielder Peter Bourjos, who has been overtaken in center by rookie phenom Mike Trout.