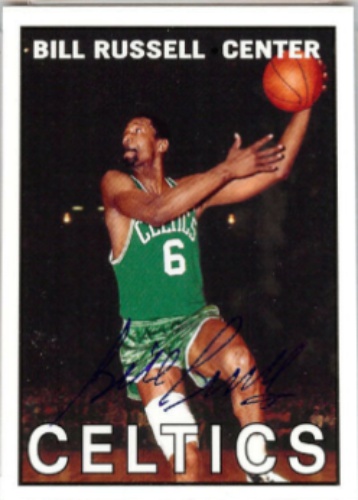 William Felton Russell (February 12, 1934 – July 31, 2022) was an American professional basketball player who played as a center for the Boston Celtics of the National Basketball Association (NBA) from 1956 to 1969. A five-time NBA Most Valuable Player (MVP) and a 12-time NBA All-Star, he was the centerpiece of the Celtics dynasty that won 11 NBA championships during his 13-year career. Russell and Henri Richard of the National Hockey League are tied for the record of the most championships won by an athlete in a North American sports league. Russell is widely considered to be one of the greatest basketball players of all time. He led the San Francisco Dons to two consecutive NCAA championships in 1955 and 1956, and he captained the gold-medal winning U.S. national basketball team at the 1956 Summer Olympics. More about Bill Russell

Current items with a signature of Bill Russell

These are the most current items with a signature of Bill Russell that were listed on eBay and on other online stores - click here for more items.

Traded items with a signature of Bill Russell

If you're interested in Bill Russell Rookie cards you might want to take a look at our sister site that specializes in Basketball Rookie Cards only.

Most recently, these items with a signature of Bill Russell were sold on eBay - click here for more items.

Who are the top 10 Boston Celtics players of all time? (01/16/23): From Ed Macauley and Bill Russell to Dave Cowens, Larry Bird, and Paul Pierce, the list of names to choose from is extensive.

On this day: Boston’s Bill Russell, Jack Garfinkel make their debuts (12/22/22): On this day, legendary Boston Celtics big man Bill Russell played his first game for the team he would win an NBA-record 11 titles with.

Jason Kidd on growing up around Bill Russell in Oakland, California (12/17/22): An underrated hotbed for NBA basketball that gave us the 11-time champ, Jason Kidd had a front row seat.

WATCH: Warriors raise Bill Russell's No. 6 into Chase Center rafters ahead of ga (12/11/22): Russell played collegiately at the University of San Francisco

Dallas Mavericks head coach Jason Kidd among those who’d have preferred the NBA (09/2022): Kidd met Russell early in life through his godfather Jim Hadnot, a lifelong friend of the Celtics legend.

Bill Russell congratulates Jayson Tatum, Celtics on reaching NBA Finals (05/2022): The legendary Bill Russell had a message for Jayson Tatum and the Boston Celtics following their Game 7 victory over the Miami Heat in the Eastern Conference Finals.

Celtics legend Bill Russell getting his own Netflix documentary (02/2022): The film will cover not only Russell's unparalleled winning in the NBA, but his career as a civil rights activist and humanitarian.

Auction of memorabilia from Bill Russell himself nets more than $5M (12/2021): The jersey that Boston Celtics Hall of Famer Bill Russell wore for his final game sold for more than $1.1 million at an auction.

Boston Celtics icon Bill Russell to leave valuble memorabilia for next owner of (08/2021): Russell, the most decorated player in NBA history, lived at the Seattle-area estate with his wife for nearly 50 years.

Russell to auction his prized NBA memorabilia (07/2021): Bill Russell, the most decorated man in NBA history, will be giving the public a chance to own some of the prized memorabilia from his Hall of Fame career.

Many NBA stars reluctant to participate in PSAs about COVID-19 vaccine, per repo (02/2021): The league has previously run PSAs with Kareem Abdul-Jabbar, Bill Russell and Gregg Popovich

Celtics' Jaylen Brown makes NBA history with big performance, gets a shout-out f (01/2021): Brown scored 33 points in 19 minutes in the Celtics' win over the Cavaliers

Bill Russell: America must grapple with its past (09/2020): In an essay for The Players' Tribune, Bill Russell said there is no way to move past racism if slavery and Jim Crow continue to be treated as "historical footnotes."

WCC invokes Bill Russell with minority hiring rule (08/2020): WCC's new "Russell Rule," named after Bill Russell, requires finalists for any athletic leadership position within the conference's schools to include at least one member of a "traditionally underrepresented community."

Scottie Pippen Calls Out Allen Iverson After Leaving Bill Russell Off His Top 5 (12/2018): After NBA icon Allen Iverson released his top-five players of all time, Hall of Fame forward Scottie Pippen has called out “A.I.” for not including legendary center Bill Russell on his list. Iverson, nicknamed “The Answer” in his playing days, instead had Michael Jordan, LeBron James, Kobe Bryant, S

Boston Celtics 1961 Championship (05/2015): The Celtics dominated and their identity came right from the legend himself, Bill Russell. The Celtics finished with the best record in the league and had little competition in the playoffs as they lost a total of 2 games. The Celtics did this with the ...

Celtics Big Man Tyler Zeller Was the Bill Russell of Nerf Basketball (04/2015): Celtics big man Tyler Zeller has blocked 50 shots this season, but if his younger brother Cody is to be believed, that’s a disappointingly low total for the greatest rim protector in Nerf basketball history.

Michael Rapaport’s Bill Russell ‘Overrated’ Claims Shot Down By Smart People (10/2014): Michael Rapaport has a basketball theory, and it’s not a very good one. The actor/filmmaker/New...

Former NBA pro Bill Russell shows a softer side (08/2014): David Stern was so afraid of inviting notoriously cantankerous Bill Russell to Stern’s induction ceremony into the Basketball Hall of Fame, the former NBA commissioner had a mutual friend ask...

Bill Russell compates gay athletes' fight with civil rights struggles of 1960s (04/2014): NBA Hall of Famer Bill Russell said Wednesday that talk about whether gay athletes can be good teammates or if they might disrupt locker rooms are the same questions black athletes heard years ago, when colleges and professional leagues were struggling with the concept of integration.

Best Redhead In NBA History? Bill Russell. (11/2013): Your day will be instantly brightened if you just assume that Ron Boone answers all questions with "Bill Russell." Read more...

Obama gets sneak peek at Bill Russell statue (10/2013): Gabrielle Levy (UPI) -- President Obama made a surprise stop to view the statue honoring Celtics great Bill Russell, which will be unveiled in Boston's City Plaza on Friday.

Bill Russell is bored (06/2013): It's Game 7 of the NBA Finals . The game is back and forth with neither team pulling away. Bill Russell, what do you think? Oh. Ok, Bill.

Bill Russell Says Every Championship ‘Feels Just as Good as the First’ (05/2013): Bill Russell has 11 championship rings, so even if he wanted to wear them all at once, he couldn’t fit them on his fingers. Poor guy. Russell is the only NBA player who can describe what it is like to win 11 individual championships. As he has said many times, he did not win 11 […]

Guy Sitting Behind Oscar Robertson and Bill Russell More Interested in the Twins (04/2013): This is championship level focus.

Bill Russell College Hoops Footage Captures a Remarkable Era in San Francisco Hi (02/2013): The above footage is 12 seconds. That's about the time it took a young Bill Russell to snag a rebound, dribble the ball coast-to-coast, then drop in a finger roll while leaping over a hapless de...

Behind the Scenes of ‘Uncle Drew: Chapter 2′ With Kyrie Irving and Bill Russell (11/2012): The two talk about fundamentals and getting buckets.

Galt MacDermot, Julia Mattison, Ryan Scott Oliver, Bill Russell, Charles Strouse (08/2012): A host of musical theatre writers will pen new songs for Once Upon a Time in New York City, an evening celebrating The City of New York, which will be presented Oct. 14 at 9:30 PM at Joe's Pub.

Hudson: Statue of Bill Russell will reflect his true greatness (05/2012): A new statue will grace Boston’s City Hall Plaza in 2013, one of Bill Russell, perhaps the greatest Celtic and professional basketball player of all time. His career stats are unprecedented.

Bill Russell Critical of ‘Hard-Liners’ in NBA Labor Dispute (11/2011): Bill Russell is no fan of hardliners — be they owners, union members, or players themselves — in this ongoing NBA lockout mess . He tells CBS Sports that he hopes reason eventually prevails : “As a very interested bystander, I just hope they get a deal,’ [Hall of Famer Bill Russell said].

Bill Russell, NBA Legend, Sues NCAA and Electronic Arts (10/2011): This could be a slam dunk case He may be 77, but he's still up for a little legal one-on-one. William "Bill" Russell, the former USF basketball star and Celtics player from the late '50s and '60s, is

Bill Russell's true gift: Telling it like it is (07/2011): Red Auerbach, a gifted communicator, believed, "It's not what you tell people that matters; it's what they hear." Anyone...

Bill Russell to join other legends with statue in his honor (05/2011): The center who won 11 championships with the Boston Celtics not only was one of the best NBA players ever, but he is also a leader in mentoring children.

A statue for basketball great Bill Russell in Boston would be a testament to hea (02/2011): As he presented Bill Russell with the Medal of Freedom last week, President Barack Obama said Boston should erect a statue for him. The Celtics have appropriately entered negotiations with the city to get it done.