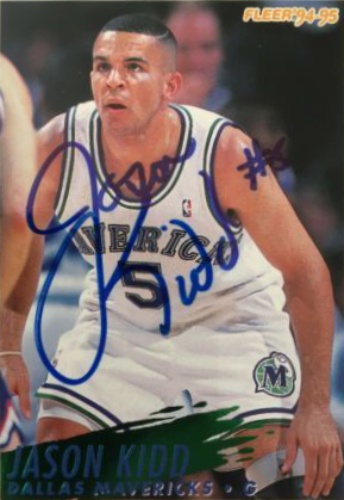 Jason Frederick Kidd (born March 23, 1973) is an American professional basketball coach and former player who is the head coach for the Dallas Mavericks of the National Basketball Association (NBA). Regarded as one of the greatest point guards and passers of all time, Kidd was a 10-time NBA All-Star, a five-time All-NBA First Team member, and a nine-time NBA All-Defensive Team member. He won an NBA championship in 2011 as a member of the Dallas Mavericks and was a two-time gold medal winner in the Olympics with the U.S. national team in 2000 and 2008. He was inducted as a player into the Naismith Memorial Basketball Hall of Fame. In October 2021, Kidd was honored as one of the league's greatest players of all time by being named to the NBA 75th Anniversary Team. More about Jason Kidd

Current items with a signature of Jason Kidd

These are the most current items with a signature of Jason Kidd that were listed on eBay and on other online stores - click here for more items.

Traded items with a signature of Jason Kidd

If you're interested in Jason Kidd Rookie cards you might want to take a look at our sister site that specializes in Basketball Rookie Cards only.

Most recently, these items with a signature of Jason Kidd were sold on eBay - click here for more items.

Jason Kidd calls out Mavericks for letting Hawks have a 'shootaround' after givi (01/19/23): Dallas' defense has taken a turn for the worse this season, and it's been particularly bad lately

Zone may hold key for Mavericks, Warriors in Game 5 (05/26/22): Dallas Mavericks coach Jason Kidd poked the bear Tuesday night. The Mavericks make another attempt to stave off elimination against the Golden State Warriors in the Western Conference finals Thursday night in San Francisco. The Warriors have mixed man-to-man and zone defenses throughout the series

Jason Kidd's perfect 'make it rain' dad joke in Warriors' loss to Mavericks (05/25/22): Jason Kidd had the perfect response to the leak at American Airlines Center on Tuesday.

Jason Kidd's message to Mavericks in face of 3-0 deficit vs. Warriors (05/2022): Jason Kidd and the Mavericks are taking things one game at a time as they look to escape a hole no NBA playoff team has ever climbed out of before.

Jason Kidd gives Mavs magic playoff touch (04/2022): With Kidd as head coach, the Mavericks closed out the Jazz to finally win their first postseason series since 2011, when Kidd was the team's point guard.

Mavericks look to ride momentum into meeting vs. Pistons (02/2022): Jason Kidd and his Dallas Mavericks' coaching staff had to improvise when the team's starting backcourt found itself in serious foul trouble Sunday against the Atlanta Hawks. The Mavericks overcame adversity in that contest and won. Next they have a home date with the struggling Detroit Pistons on

Jason Kidd enters COVID-19 protocols (01/2022): Tim Bontemps: The Mavericks say Jason Kidd has entered the health and safety protocols, and that assistant Sean Sweeney will coach the team in his place tonight against the Rockets. Source: Twitter @TimBontemps What's the buzz on Twitter? Mark ...

Lakers success spurred Jason Kidd's coaching quest to win another title in Dalla (12/2021): Jason Kidd's NBA career started in Dallas more than 25 years ago and the journeyman coach is "humbled" to get another chance to guide a team and compete for a title.

Sources: Mavs to add Kokoskov to Kidd's staff (07/2021): The Dallas Mavericks are on the verge of hiring Igor Kokoskov to join Jason Kidd's coaching staff, sources confirmed to ESPN.

Steve Nash joins list of point guards to become NBA coaches that includes Jason (09/2020): Quite a few high-profile point guards have made the transition to becoming an NBA head coach

Ty Lue is 'prime candidate' for 76ers coaching job, but Jason Kidd, John Lucas i (08/2020): The 76ers have one of the most desirable head coaching jobs on the market

Could Jason Kidd actually lure Giannis Antetokounmpo to the Knicks? A look back (06/2020): The Knicks are interested in hiring Kidd as their new head coach, reportedly due to his relationship with Giannis

Luka Doncic ties Jason Kidd for most triple-doubles in Mavericks franchise histo (02/2020): Doncic did it in 119 games, while Kidd needed 500

Jason Kidd still not satisfied after masterful coaching job (04/2015): MILWAUKEE — When Jason Kidd left Brooklyn to coach the Bucks last summer, he wasn’t focused on making the playoffs. “I think we were talking about how we were going...

Hot betting stat of the day: Coach Jason Kidd has Heat's number SU and ATS (03/2015): Milwaukee Bucks head coach Jason Kidd has posted a record of 7-0 both straight up and against the spread in the regular season during his coaching career against the Miami Heat. Kidd, who coached the Brooklyn Nets in the 2013-14 season, went a per...

Comparing Michael Carter-Williams and Bucks' Jason Kidd on the court (02/2015): The Bucks made a big splash at the 2015 NBA trade deadline by shipping away All-Star snub Brandon Knight in exchange for a package including...

Rebuilding Bucks find success with coach Jason Kidd despite losing Parker and Sa (01/2015): MILWAUKEE — Coach Jason Kidd has the Bucks making progress in the middle of the first season of his rebuilding project in Milwaukee. At 22-22, the Bucks are even in the playoff hunt in the mediocre Eastern Conference.

Report: Kenyon Martin to meet with Bucks head coach Jason Kidd; Cavaliers also i (12/2014): If Martin can prove he still has something left, he'll likely get a shot somewhere once 10-day contracts become available to teams on Jan. 5.

The making of coach Jason Kidd (10/2014): Jason Kidd's coaching career began before he retired three years ago, before he even won a championship with the Dallas Mavericks in 2011. No, that started in Las Vegas, and then in Beijing, China, in 2008.

Joe Johnson on last season under Jason Kidd: ‘We practiced, but, you know … not (09/2014): Johnson can't contain his amusement when delivering the statement.

Nets' Andrei Kirilenko denies he was negative about Jason Kidd leaving for Bucks (07/2014): The forward clarified his comments made to a Russian newspaper.

Jason Kidd Bound for Milwaukee Bucks: Reports (06/2014): The Bucks reportedly will give up two second-round picks for the New Jersey Nets coach.

The unconventional Nets continue to evolve under Jason Kidd (05/2014): Under the tutelage of rookie head coach Jason Kidd, the Brooklyn Nets have become accustomed to confronting and adapting to change.

Jason Kidd's Son -- UNIMPRESSED ... With Dad's First Year As NBA Coach (04/2014): Jason Kidd's son was not blown away by his father's rookie performance as an NBA coach ... despite the fact the Brooklyn Nets are currently in the playoffs! Jason Kidd Jr. was out at Hooray Henry's with some friends last night when asked him…

Jason Kidd says he 'probably shouldn't have' intentionally spilled drink (11/2013): On Thanksgiving Day, the league announced a $50,000 fine for Kidd's stall tactic, which happened near the end of a tightly contested game between the Nets and Lakers.

Jason Kidd gives Nets extra ‘push-ups’ to make free throws (10/2013): After watching his team shoot just over 65 percent from the free throw line during the first five preseason games, Nets coach Jason Kidd decided to do something about it...

Jason Kidd wants Deron Williams to average double-figure assists (08/2013): A pass-first approach shouldn't come as a surprise from Jason Kidd, who has 12,091 assists over his 20 year career, good for second all-time behind John Stockton. Kidd himself averaged at least 10 assists per game three seasons in his career.

Nets hire Jason Kidd as coach (06/2013): The Brooklyn Nets have hired Jason Kidd as their coach, bringing the former star back to the franchise.

Knicks' Jason Kidd wins Joe Dumars award for sportsmanship (04/2013): The NBA honor that bears Joe Dumars' name has yet to be won by a Piston since he won the inaugural award in 1996.

Knicks links: Jason Kidd searches for shot (02/2013): He hit over 50 percent of his field goals in November, but the rest of the season has gotten progressively worse for soon-to-be 40-year-old Jason Kidd

Look for Jason Kidd to be in Knicks lineup vs. Bucks (01/2013): After missing one game with a sore back, Jason Kidd is expected to return to the Knicks' lineup against the Bucks.

Knicks Expect Jason Kidd to Return Next Week (11/2012): Guard Jason Kidd has been out with back spasms but may play Wednesday night at Charlotte, or shortly thereafter.

Serby's Sunday Q & A with... Jason Kidd (10/2012): Knicks point guard, and former Net, Jason Kidd took a shot at some Q&A with Post columnist Steve Serby. Q: What was it like being a New Jersey Net in a Knicks town? A: It was tough because everybody loves the Knicks. They have such deep history, and for...

Knicks links: Jason Kidd appeal's DWI arrest, Malcolm Thomas vying for roster sp (09/2012): Knicks point guard Jason Kidd plans on appealing his drunk driving arrest, which may explain why he's been quiet on the issue (Of course, he might just be quiet because he's on the Knicks)

Jason Kidd’s jersey is one Mavs want to retire, says general manager (07/2012): “Jason [Kidd] will be missed and he is appreciated beyond words. And at some point we’re hoping to get that old number retired in the rafters.”

Midday Stampede: Jason Kidd Interested in the Bulls? (06/2012): July 1st is only a few weeks away and the NBA Free Agency period should be thrilling, especially in Chicago. Photo Credit: Getty Images

Jason Kidd Wants to Be Deron Williams’ Backup (01/2012): Deron Williams will be one of the most prized NBA free agents next summer, and Jason Kidd is already recruiting him to the Dallas Mavericks on the low through the media.

NBA Star Jason Kidd Buys Mansion in Southampton (12/2011): Jason Kidd is the newest kid on the block in Southampton, NY . Although he spends the NBA basketball season dribbling for the champion Dallas Mavericks , Kidd wanted an East Coast abode.

Kicks: PEAK Kidd IV, Jason Kidd’s Next Signature Shoe (10/2011): The Mavs guard will be rocking these whenever NBA action returns.

Almost Secret Matrimony-Dom: Jason Kidd Upgrades His Baby Mama Porschla Coleman (09/2011): Man, these two are really good at keeping their isht quiet! And they weren’t even trying this time. Jason Kidd and Porschla Coleman , who managed to keep her pregnancy a complete secret until she gave birth to their first

Jason Kidd: LeBron James Will Win Multiple Championships (06/2011): The fact is that LeBron James came up small on the biggest stage during the NBA Finals. He looked passive and unsure, and his numbers took a significant dip during the title round.

Past teammates recall Jason Kidd's greatness (05/2011): Few people know the worth of a player more accurately than do his teammates - even roughly two decades later. Jason Kidd made Alameda and Berkeley the places to be for Bay Area basketball fans from the late 1980s to the...

Jason Kidd's Last Stand? (04/2011): As the Dallas Mavericks prepare to host Game 5 of their first round series with the Portland Trail Blazers, we have to wonder if the end is near for Jason Kidd.

Jason Kidd's late 3s help Mavericks sink Suns 91-83 (03/2011): Jason Kidd sank a pair of 3-pointers in the final 1:11 and the Dallas Mavericks pulled out a 91-83 win over Phoenix on Sunday night that may have dropped the curtains on the Suns' hopes for a playoff berth.

Video: Jason Kidd’s Hits Game-Winner Against Celtics (02/2011): Ray Allen ‘s quote after the game was so good, we’ll give it to you again : “I’ll be in my bed thinking about how I never should’ve left Jason Kidd open.”

Jason Kidd's former teammate eyed as RoS' import (01/2011): A former teammate of NBA superstar Jason Kidd is now being eyed by the Rain or Shine Elasto Painters to become their import in the Philippine Basketball Association Commissioner’s Cup, which starts next month.