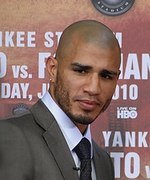 Miguel Ángel Cotto Vázquez (born October 29, 1980) is an American-born Puerto Rican former professional boxer who competed from 2001 to 2017. He is a multiple-time world champion, and the first Puerto Rican boxer to win world titles in four weight classes. In 2007 and 2009, he reached a peak active pound for pound ranking of seventh by The Ring magazine. Cotto started out his career as a hard-hitting pressure fighter, but evolved over the years into a more refined boxer-puncher as he moved up in weight. More about Miguel Cotto

Current items with a signature of Miguel Cotto

These are the most current items with a signature of Miguel Cotto that were listed on eBay and on other online stores - click here for more items.

Traded items with a signature of Miguel Cotto

The most expensive item with a signature of Miguel Cotto (wbc signed belt manny pacquiao miguel cotto Erick morales) was sold in December 2016 for $1009.00 while the cheapest item (MANNY PACQUIAO SIGNED AUTO 8 X 10 PHOTO MIGUEL COTTO COA AUTHENTIC 180) found a new owner for $0.88 in March 2016. The month with the most items sold (22) was November 2009 with an average selling price of $85.53 for an autographed item of Miguel Cotto. Sold items reached their highest average selling price in April 2013 with $279.99 and the month that saw the lowest prices with $5.99 was December 2020. In average, an autographed item from Miguel Cotto is worth $59.99.

Most recently, these items with a signature of Miguel Cotto were sold on eBay - click here for more items.

Matthew Macklin - I could beat legend Miguel Cotto at middleweight (11/14/14): Former British and European champion aims for a fourth world title fight ahead of clash with Heiland on Saturday night in Dublin

Boxing champ Miguel Cotto in Jersey City at Hispanic Heritage Month gala (10/2014): Congratulations! Your weather is set to . You can change the location at any time. Don't have an account?

Miguel Cotto agrees to fight Sergio Martinez in a blockbuster middleweight match (02/2014): Miguel Cotto aims to be the first four-division world champion from Puerto Rico when he faces the dangerous Sergio Gabriel Martinez from Argentina who currently holds the WBC middleweight title.

Miguel Cotto will bring boxing star-power to Orlando (07/2013): The last time Orlando played host to a big-time boxing event was in February of 1989, when over-the-hill and former heavyweight champion George Foreman fought Brazil's Manoel De Almeida in the Atlantis Theater at SeaWorld.

Austin Trout: The classy champ overwhelms Miguel Cotto (12/2012): On the biggest stage he ever performed on, against his best and biggest named opponent and in the world’s most famous city and boxing arena, Austin “No Doubt” Trout put on a remarkable display of boxi

Las Crucen Austin Trout takes on Miguel Cotto in New York (11/2012): Tonight they make that walk, that adrenaline-flooded walk toward glory or failure ... walking the walk toward center ring in that grandest of arenas, Madison Square Garden .

Boxing: Miguel Cotto's opponent not intimidated (09/2012): Undefeated southpaw Austin Trout knows that no matter how many of his family members come to Madison Square Garden on Dec. 1, they’ll be overwhelmingly outnumbered by Cotto fans.

Matthew Aguilar: Faded Miguel Cotto lacks ability to stay with Mayweather (05/2012): There was a time when Miguel Cotto was one of the hottest fighters in boxing. He had ability, power and smarts.

Miguel Cotto and Timothy Bradley, you'll thank them later (02/2012): Boxing fans are like the beautiful women Chris Rock riffed about in his comedy routine, when you ask them what they want they answer you without skipping a beat, "everything."

Floyd Mayweather Sr. "I talked to my son the other day and he was telling me tha (01/2012): by Jenna J - This week's 155th edition of On the Ropes Boxing Radio features exclusive interviews with trainer Floyd Mayweather Sr. and super middleweight contender Andre Dirrell.

To Miguel Cotto it is all about vengeance | BoxingInsider.com - Boxing | Boxing (11/2011): Miguel Cotto has only one agenda Saturday evening at Madison Square Garden. He wants vengeance and is not shy about saying that he will kill Antonio Margarito. That is anger and talk about revenge coming from the WBA super welterweight champion.

Miguel Cotto Workout (02/2011): WBA super welterweight champion Miguel Cotto shows his form as he prepares for his March 12 title defense against former champion Ricardo Mayorga. The bout will be seen on SHOWTIME PPV.

Ricardo Mayorga jabs, Miguel Cotto counters in media meeting (01/2011): World Boxing Association junior middleweight champ Miguel Cotto is a fighter of few words. Ricardo Mayorga, his challenger for a March 12 fight at the MGM Grand in Las Vegas, is a well known for his trash talking.