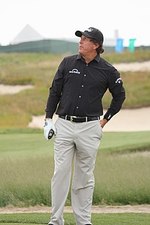 Current items with a signature of Phil Mickelson

These are the most current items with a signature of Phil Mickelson that were listed on eBay and on other online stores - click here for more items.

Traded items with a signature of Phil Mickelson

Most recently, these items with a signature of Phil Mickelson were sold on eBay - click here for more items.

R&A announces LIV Golf players will be allowed to compete in 150th Open Champion (06/22/22): Dustin Johnson and Phil Mickelson will tee it up in July at the final major of the year

What is LIV Golf? Players, field, tour schedule for league with Phil Mickelson, (06/21/22): Everything to know about the PGA Tour's newest rival as it begins its inaugural season

2022 U.S. Open missed cuts: Phil Mickelson, Cameron Smith among stars who will m (06/17/22): While big names are contending at the U.S. Open, there are a number of top players who won't be around for the weekend

Phil Mickelson score: Lefty ejects with 8-over 78 in return to American competit (06/17/22): After an opening 78, Lefty finds his name ahead of only a handful on the leaderboard

At U.S. Open, Betrayal, Greed, a LIV Golf Star and, Above All, Decorum (06/2022): PGA Tour loyalists golfed alongside tour defectors for the first time, and for Phil Mickelson, LIV Golf’s highest-paid star, it was business as usual down to his score.

Tiger Woods addresses Phil Mickelson's 'disappointing' absence as defending cham (05/2022): Phil Mickelson chose to skip this year's PGA, which is as sad as it is confusing

Phil Mickelson registers for PGA Championship and U.S. Open, seeks PGA Tour exem (04/2022): Mickelson has not yet decided when he will next play golf professionally

2022 Masters: Phil Mickelson out of Augusta National field for first time in nea (03/2022): Lefty is not presently scheduled to play the Masters for the first time since 1994

Phil Mickelson's Saudi Arabia comments prove costly as sponsors cut ties with em (02/2022): Lefty doesn't have many folks left by his side as the 2022 Masters nears

Best golf events in 2021: Phil Mickelson's PGA Championship triumph headlines to (12/2021): There are three majors on the list, but Lefty's win at Kiawah stands well above the rest

Jim 'Bones' Mackay returns to career as caddie, links up with Justin Thomas in a (09/2021): Mackay famously caddied for Phil Mickelson for 25 years before leaving for TV in 2017

Phil Mickelson blasts USGA for potential rule limiting the length of drivers (08/2021): Lefty is not a fan of what the USGA apparently has in store for the future of golf

Ranking the seven golf majors of 2020-21 from Phil Mickelson's historic win to C (07/2021): There's a clear No. 1 and No. 7 on the list, but the rest of the major tournaments are difficult to sort through

Masters 2021: Billy Horschel slips on a hill but saves par hitting from the wate (04/2021): Horschel and Phil Mickelson played in one of the more entertaining groups of the morning wave

2021 American Express scores: Sungjae Im takes one-shot lead as host Phil Mickel (01/2021): The 22-year-old Im holds the one-stroke lead after shooting a 7-under 65 during the second round on Friday

2020 U.S. Open: Phil Mickelson returns to Winged Foot, the course that stole his (09/2020): Fourteen years later, Lefty has a chance to conquer Winged Foot the way he was unable to in 2006

WATCH: Phil Mickelson putts from 78 yards in fairway, showing how tough Muirfiel (07/2020): Lefty had himself quite a day en route to 78 on Sunday at Muirfield Village

Phil Mickelson eligible for U.S. Open after new qualification standards announce (06/2020): The Winged Foot field will be filled without open qualifying in 2020

Debate over Phil Mickelson as a top 10 all-time golfer rages on as opportunities (05/2020): Lefty's numbers stack up nicely against the competition, but are numbers the only measure?

First Cut: An Appreciation of what Phil Mickelson has done over the course of 30 (02/2020): Plus, a sibling duo that you need to know about on the other side of the world

PGA Merchandise Show 2020: Callaway's investment in A.I. technology is creating (01/2020): The company is using the technology from the future to help golfers like Phil Mickelson today

WATCH: Phil Mickelson tries to stay on Santa Claus' nice list ahead of 2020 Ryde (12/2019): Lefty wants Santa to help him deliver at Whistling Straits in 2020

Phil Mickelson's most impressive feat may very well be his longevity in the top (10/2019): Lefty is hanging on for dear life in the Official World Golf Rankings

Phil Mickelson explains how to hit a "sexy" chip shot (02/2019): Want to learn how to hit a Phil Mickelson chip shot? Now's your chance! Lefty is known as having one of the best short games on Tour, and — lucky us! — he's using his off-week to not only work on his game, but also give his Twitter followers some instruction advice too.

Woods vs. Mickelson: The match of the year (12/2018): Did you happen to watch the pay-per-view match between Tiger Woods and Phil Mickelson? As you are probably aware, the match was a “winner take all” for $9 million! Unfortunately, I was unable to watch the match,

Out of nowhere, Phil Mickelson nearly roars past Spieth (04/2015): AUGUSTA, Ga. — Phil Mickelson wasn’t expected to make much noise at the 79th Masters, not after the year he was having. But this is Augusta National and Mickelson naturally...

Phil Mickelson, Stacy Lewis in campaign to shatter glass ceilings (03/2015): Stacy Lewis hit one of the most significant drives of her career, and it really didn't matter where it landed.

Phil Mickelson remains upbeat through struggles (02/2015): Golfer thinks a breakthrough is not far off after tough start to year.

Phoenix Open Notebook: Phil Mickelson misses cut after 'difficult' round (01/2015): Phil Mickelson, after opening with a 69 on Thursday, had six bogeys and a birdie in a second-round 76.

Phil Mickelson was right to criticise Tom Watson in public - the US Ryder Cup ca (09/2014): Corrigan's World of Golf: It's time PGA of America listened to Azinger and Mickelson. It is time they put structures in place and take it seriously. Or else they shall carry on being laughing stock

There Is No Connection Between Phil Mickelson And Carl Icahn (06/2014): When news first broke about the existence of a federal insider-trading probe into billionaire Carl Icahn, golfer Phil Mickelson and sports gambler William Walters, Icahn was quick to point out that he and Mickelson didn’t know each other.

Phil Mickelson pulls out of Texas Open (03/2014): Tiger Woods is dealing with a back injury and doesn't know if he'll be able to play at the Masters next month. He may not be the only multiple major winner from the U.S. struggling to be ready for Augusta.

Free of back pain, Phil Mickelson braves the elements during second day of AT&T (02/2014): PEBBLE BEACH -- Phil Mickelson stood waiting in the tee box at the famed 18th hole of Pebble Beach Golf Links on Friday when he began to stretch, of all things, his back.

Phil Mickelson lines up Scottish return as he eyes a double defence his Open tit (11/2013): THE five-time Major winner reckons his Scottish Open triumph at Castle Stuart in July played a key role in preparing him to claim the Claret Jug the following week at Muirfield and is ready for more of the same in 2014.

Rory McIlroy trending up in China; Phil Mickelson not so much (10/2013): Rory Mcllory tees off on the eighth hole during the first round of the HSBC Champions tournament Thursday in Shanghai. ( Eugene Hoshiko / Associated Press / October 31 , 2013 )

Phil Mickelson to cut playing schedule by 25 percent to improve winning chances (09/2013): London, Sept 24 (ANI): Golfer Phil Mickelson is planning to cut his schedule by a quarter next year to improve his chances after an inconsistent season, even though he won his first Open Championship this year.

Phil Mickelson won't play at The Memorial, but field includes top six golfers in (05/2013): No. 1 Tiger Woods and No. 2 Rory McIlroy will headline the field next week in Dublin, Ohio.

Phil Mickelson Hits Two Balls At Once In Yet Another Ridiculous Trick Shot (03/2013): We've been watching YouTube videos of Lefty hitting trick shots ever since. We can't get enough of them . In this one, he lines up two balls in the bunker and hits them at the same time.

Phil Mickelson is PGA Tour's Mr. Popularity for a reason (02/2013): Why? Well, there are plenty of factors that make the 'big ol' gummy bear' a cuddly choice of golf fans, especially in Southern California. It was high noon Friday and the faithful were everywhere, waiting for Phil Mickelson to pull the trigger on his second round in the Northern Trust Open.

Phil Mickelson ranks US Ryder Cup defeat at Medinah one of 'lows' of his career (10/2012): The U.S. loss in the Ryder Cup did nothing to dampen Phil Mickelson's popularity at the WGC-HSBC Champions.

DEUTSCHE BANK NOTEBOOK: Phil Mickelson gets a grip on his putting (08/2012): Phil Mickelson has gone from belly putter to some form of the claw grip and produced his first bogey-free round since his final-round 64 to win at Pebble Beach. Mickelson opened with a 3-under 68 in the Deutsche Bank Championship Friday.

Golf: Fatigued Phil Mickelson withdraws from Memorial after shooting 79 (05/2012): Erik Compton shoots 67 and is one shot out of the lead

Phil Mickelson's triple-bogey on No. 4 at Masters could doom him (04/2012): Phil Mickelson made a triple-bogey, his second of the week, to push him well down the leaderboard at Augusta National.

Phil Mickelson surges into tie for lead at Houston Open (03/2012): Phil Mickelson watches his tee shot on the eighth hole during the completion of the weather-delayed first round of the Shell Houston Open at Redstone Golf Club on March 30, 2012 in Humble, Texas.

Phil Mickelson after vote into Hall of Fame: 'Really cool' (11/2011): It was a gimmee putt for the World Golf Hall of Fame electorate: Phil Mickelson will be inducted in St. Augustine next spring, joining the sport's elite in his first year of eligibility.

On Par: Phil Mickelson vs. the Jersey Guy (08/2011): It was the first hole of the second round of the 1990 United States Amateur, and Phil Mickelson sent a message.

Fantasy golf focus: Keep an eye on Phil Mickelson in final tuneup before Masters (03/2011): FLINT, Michigan — One more week until Augusta! It also means the field is pretty weak. Many top players like to spend the week before a major practicing but there are a handful of stars in the Houston field led by defending Masters champion Phil Mickelson.