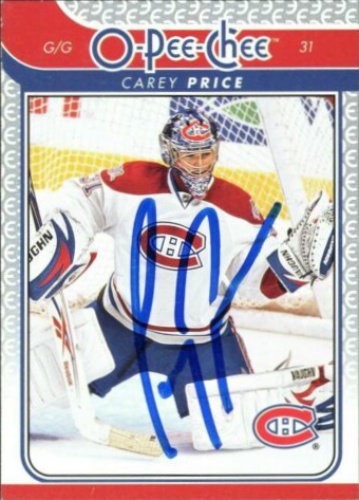 Current items with a signature of Carey Price

These are the most current items with a signature of Carey Price that were listed on eBay and on other online stores - click here for more items.

Traded items with a signature of Carey Price

If you're interested in Carey Price Rookie cards you might want to take a look at our sister site that specializes in Hockey Rookie Cards only.

The most expensive item with a signature of Carey Price (Carey Price Signed Goalie Mask Team Canada Sochi 2014 Autographed) was sold in June 2022 for $2545.00 while the cheapest item (SIGNED CAREY PRICE PHOTO 11X13 READY FOR FRAMING MONTREAL CANDIENS WITH COA) found a new owner for $0.72 in February 2016. The month with the most items sold (33) was December 2016 with an average selling price of $13.62 for an autographed item of Carey Price. Sold items reached their highest average selling price in June 2022 with $291.25 and the month that saw the lowest prices with $1.99 was February 2010. In average, an autographed item from Carey Price is worth $24.99.

Most recently, these items with a signature of Carey Price were sold on eBay - click here for more items.

Canadiens goalie Carey Price likely to miss 2022-23 season, leaving team with un (08/19/22): Montreal will most likely be without their star goaltender next season

Stanley Cup Final pits Lightning vs. high-scoring Avalanche (06/15/22): To win the Stanley Cup each of the past two years, the Tampa Bay Lightning had to go through the stingy New York Islanders, defending Dallas Stars and Montreal Canadiens backstopped by goaltender Carey Price. The Colorado Avalanche present a unique challenge for the Lightning, but they already got

Carey Price: Returning to Canadiens crease 'something that is keeping me motivat (01/2022): Canadiens goaltender Carey Price hopes to return to action this season -- and to keep playing for Montreal.

Seattle Kraken expected to pass on Canadiens' Carey Price in NHL Expansion Draft (07/2021): The Canadiens great is likely to to remain with his team despite rumors he would be picked in Expansion Draft

Conn Smythe Watch: Can Carey Price win playoff MVP if the Canadiens lose? (06/2021): With the Stanley Cup Final upon us, here's an updated look at who is leading the race for playoff MVP.

The best goalie prospect since Carey Price? Ranking the top 2020 NHL draft goalt (05/2020): Yaroslav Askarov has been projected in the top 10 of the 2020 NHL draft. What makes him so special? And who ranks behind him among the class' top goalies?

Tkachuk scores in OT, Senators beat Canadiens 2-1 (11/2019): Brady Tkachuk finished what Jean-Gabriel Pageau started, and the Ottawa Senators feel like they have the struggling franchise moving in the right direction. Tkachuk went five-hole on Carey Price 38 seconds into overtime, Pageau scored for the second straight game and the Senators beat the Montreal

Carey Price makes 17 saves, Canadiens beat Wild 4-0 (10/2019): It sounded like an overtime goal in the playoffs. The Bell Centre erupted in a deafening roar when defenseman Victor Mete scored his first NHL goal in his 127th game - the longest goal drought to start a career in Canadiens history. Montreal went on to beat the Minnesota Wild 4-0 on Thursday night

Carey Price and the three other goalies’ teams want to avoid in the NHL playoffs (04/2015): They say defense wins championships, and in hockey that starts with the goaltender.

Montreal Canadiens goalie Carey Price, Calgary Flames rookie Johnny Gaudreau and (03/2015): Hockey is all about timing. The team that wins the Stanley Cup is not always the one that finishes with the most points in the regular season

Carey Price carries Habs in 4-0 shutout of Leafs (02/2015): Manny Malhotra scored his first goal as a Canadien and Carey Price made 30 saves for his sixth shutout as Montreal downed the Toronto Maple Leafs 4-0 on Saturday night.

Carey Price perfect as Canadiens shut out Capitals (01/2015): Left winger Max Pacioretty scored in overtime to give the Montreal Canadiens a 1-0 win over the Washington Capitals on Saturday afternoon at Bell Centre.

Carey Price solid again in net as Canadiens cool off surging Islanders, 3-1 (12/2014): UNIONDALE, N.Y. - The message to the Montreal Canadiens after another sluggish first period was familiar, yet still effective.

Carey Price turns away 33 shots en route to shutout against Bruins (11/2014): The Canadiens improved to 9-1 in their last 10 regular-season games against the Bruins with a win Saturday night in Boston.

Flying Flames thwarted by brilliant Carey Price, fall 2-1 to Habs in shootout (10/2014): Studying the Montreal Canadiens’ recent batch of visits, you might have made an assumption.

NHL superstar Carey Price honoured by community in Anahim Lake (08/2014): The gymnasium of the Anahim Lake School was packed last week as community members turned out to honour one of their own.

Habs goalie Carey Price recovers lost dogs (06/2014): MONTREAL - Carey Price can relax — his Labrador retrievers are back home. The Montreal Canadiens goaltender's dogs Motty ("short for Mozart") and Duke got loose overnight. But, after word went out on Twitter, both were found and returned Monday morning.

Carey Price: Canadiens ‘Ready To Start Playing And Stop Practicing’ (04/2014): While it was largely believed that Game 1 between the Montreal Canadiens and Boston Bruins...

Jack Todd: Carey Price has earned Canada’s starting job in Sochi (12/2013): The Integrated Homicide Investigation Team is investigating after a woman was reportedly beaten in the parking lot behind Newton Recreation Centre Sunday night. According to media reports, the woman had...

Carey Price stops Alex Chiasson's baseball shot (10/2013): Alex Chiasson's career has been off to a fantastic start in Dallas, scoring 11 goals in his first 18 games. It seems that just about everything he's touched has resulted in a goal, scoring on an incredible 22.4 percent of his shots.

Carey Price sees promise in Canadiens despite 3-1 loss to Hurricanes (09/2013): MONTREAL - Carey Price feels that the Montreal Canadiens are really starting to jell.

Carey Price, Roberto Luongo in Calgary as Team Canada looks for its No. 1 netmin (08/2013): The honeymoon will have to wait for Carey Price.

Melanson: Carey Price's play deteriorating (06/2013): Montreal Canadiens' goaltender Carey Price is seriously regressing, at least according to his old goalie coach. Roland Melanson, who was Price's goalie coach in Montreal until 2009, told L'Acadie Nouvelle (a french newspaper in New Brunswick) that Price's play has declined every year since '09.

All eyes on Carey Price as Canadiens stumble into NHL playoffs (04/2013): The Montreal Canadiens went from last place in the Eastern Conference in 2011-12 to a playoff spot with home-ice advantage this season.

Carey Price makes 34 saves for the shutout as Canadiens down Rangers 3-0 (03/2013): MONTREAL - Michael Ryder and Tomas Plekanec scored in the first period and Carey Price made 34 saves and the Montreal Canadiens shut out the New York Rangers 3-0 on Saturday night.

Carey Price under fire for tweeting controversial hunting pics (12/2012): Some are hunters or gatherers.

/R E P E A T -- Media advisory - Unique partnership with professional goaltender (10/2012): MONTREAL , Oct. 22, 2012 /CNW Telbec/ - Ubisoft is proud to invite members of the press to the launch of our studio's most extensive production, Assassin's Creed III. This launch will follow a press conference ...

Carey Price faces greatest pressure yet next season (07/2012): Can he justify his hefty new deal?

Twitter did not take kindly to Gord Miller jinxing Carey Price’s shutout (01/2012): In fact, it was downright rude.

Carey Price ready for his close-up (09/2011): Canadiens goaltender's draw as a pitchman grows with his increasing profile in the sport

Carey Price talks roping and hockey (07/2011): Carey Price is polite, genuine and quick to engage in conversation as he prepares his horse to practice roping for his appearance at the Quesnel rodeo.

MONTREAL - Goaltender Carey Price is the one Montreal Canadien who can't be faul (03/2011): Price stopped 31 of 33 shots but it wasn't enough as the listless Canadiens were shut out in a third straight game in a 2-0 loss to the Washington Capitals on Saturday night.

VANCOUVER -- When the last seconds finally ticked off the clock, massive defence (02/2011): grabbed a souvenir for the Montreal Canadiens' goaltender. "I really wanted that puck," Price said in a soft voice while facing a crowd of reporters in the Montreal locker-room. "That was the only one I wanted all year."

Canadiens Q1 Review: Carey Price Leads Habs to Successful First Quarter (11/2010): With the Canadiens having played 24 games this season, it seems like a fitting time to evaluate their quarterly performance.