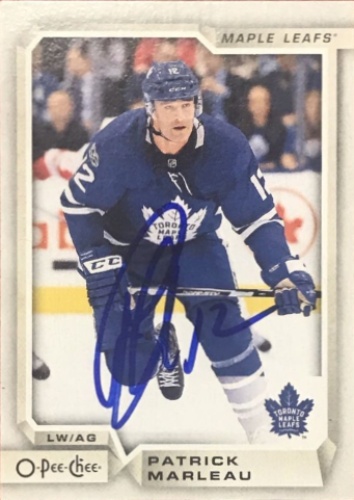 Patrick Denis Marleau (born September 15, 1979) is a Canadian former professional ice hockey forward. With 1,779 NHL games played, he is the all-time leader in games played in league history. The San Jose Sharks drafted Marleau second overall in the 1997 NHL Entry Draft, and Marleau spent the vast majority of his NHL career with the franchise, becoming its all-time leader in goals, even strength goals, power play goals, points, shots, and games played. He also holds the NHL record for most regular season games played all-time with 1,779. He passed the record previously held by Gordie Howe in his 1,768th game on April 19th, 2021. Marleau is also the fourth player in NHL history to record 900 consecutive games played, reaching the mark one game after breaking the overall games played record. He was the third-last active player who played in the NHL in the 1990s. More about Patrick Marleau

Current items with a signature of Patrick Marleau

These are the most current items with a signature of Patrick Marleau that were listed on eBay and on other online stores - click here for more items.

Traded items with a signature of Patrick Marleau

Most recently, these items with a signature of Patrick Marleau were sold on eBay - click here for more items.

Sharks will retire Patrick Marleau's No. 12 in ceremony next season (07/28/22): Marleau will see his number raised to the rafters prior to the Sharks' game against the Blackhawks on Feb. 25, 2023

Patrick Marleau's emotional farewell to record-breaking NHL career (05/10/22): Perhaps no NHL player has earned more of a proper sendoff into retirement than Patrick Marleau. On Tuesday afternoon, he got it.

Sharks legend Patrick Marleau officially retires after 23 NHL seasons (05/10/22): After 21 seasons with the Sharks, two more with the Toronto Maple Leafs and part of a season with the Pittsburgh Penguins, Patrick Marleau is hanging up his skates.

After Patrick Marleau's feat, six NHL records that could fall next (04/2021): The NHL could see a few other big records fall over the next few seasons. Here are the ones most likely to be broken.

Losing streak over, Sharks set to face Wild (11/2019): Patrick Marleau's milestone moment helped the San Jose Sharks snap a five-game losing streak. The Sharks hope to build on that when they play host to the Minnesota Wild on Thursday night. Marleau scored Tuesday while playing in his 800th consecutive game as the Sharks put an end to their skid with

Marleau celebrates milestone as Sharks visit Leafs (10/2019): Patrick Marleau will be playing in his 1,500th game as a San Jose Shark on Friday night when the team visits the Toronto Maple Leafs, his only other NHL team. Marleau, 40, rejoined the Sharks this season after playing in 2017-18 and 2018-19 with the Maple Leafs. Including his time with Toronto, he

Matthews' All-Star tribute speaks volumes about Marleau's value to Maple Leafs - (02/2019): Inside the Toronto Maple Leafs organization, Patrick Marleau’s value is being measured by much more than goals and assists.

Sharks' Patrick Marleau starting to turn things around with hot streak (01/2015): Known as a streaky player for Sharks, Patrick Marleau had gone 22 games with only one goal before scoring three in the last five on this homestand

Patrick Marleau-Brad Marchand Trade Wouldn’t Have Helped Bruins (06/2014): Rumors surfaced Thursday night that a plan was in the works between the Bruins and Sharks...

Reactions to Patrick Marleau helping Sharks sweep Canucks (05/2013): Much-maligned Sharks star Patrick Marleau scored two goals Tuesday night, including the one in overtime that gave San Jose a 4-3 victory and a four-game sweep against Vancouver in the NHL playoffs' first round.

Patrick Marleau has an interesting conspiracy theory (10/2012): He thinks the owners planned to lose games this summer.

Columnist: Sharks should trade Patrick Marleau (04/2012): Does San Jose need a culture change in order to win a Stanley Cup?

Patrick Marleau's goal lifts Sharks over Oilers (12/2011): Joe Thornton and the rest of the Sharks feel comfortable at HP Pavilion again, and it's starting to pay off. Patrick Marleau scored the tie-breaking goal 6:11 into the third period for the Sharks, who beat the Edmonton...

San Jose Sharks veteran Patrick Marleau's speed belies his age (10/2011): After an offseason full of change for the Sharks, one thing remains the same: The team's fastest skater. ”Do you even need to ask?” Joe Thornton said.

Patrick Marleau of San Jose Sharks to reach 1,000 games played (01/2011): Sharks center Patrick Marleau is expected to reach a milestone on Monday afternoon when he plays in his 1,00th game.