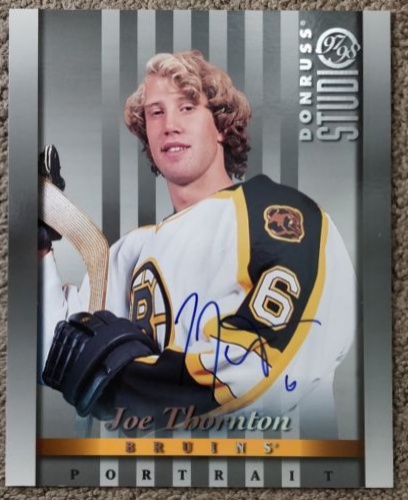 Joseph Eric Thornton (born July 2, 1979) is a Canadian professional ice hockey centre who is currently a free agent. He has previously played for the Boston Bruins, San Jose Sharks, Toronto Maple Leafs and Florida Panthers of the National Hockey League (NHL). He was selected first overall by the Bruins in the 1997 NHL Entry Draft and went on to play seven seasons with the club, three as its captain. During the 2005–06 season, he was traded to the Sharks. Splitting the campaign between the two teams, he received the Art Ross and Hart Memorial Trophy as the league's leading point-scorer and most valuable player, respectively. Thornton would go on to another 14 seasons with the Sharks, including four seasons as team captain and a run to the 2016 Stanley Cup Finals. More about Joe Thornton

Current items with a signature of Joe Thornton

These are the most current items with a signature of Joe Thornton that were listed on eBay and on other online stores - click here for more items.

Traded items with a signature of Joe Thornton

If you're interested in Joe Thornton Rookie cards you might want to take a look at our sister site that specializes in Hockey Rookie Cards only.

The most expensive item with a signature of Joe Thornton (JOE THORNTON AUTOGRAPHED PRO BOSTON JERSEY COA/HOLOGRAM) was sold in January 2013 for $699.00 while the cheapest item (San Jose Sharks Joe Thornton autographed hockey news) found a new owner for $0.19 in December 2009. The month with the most items sold (28) was April 2008 with an average selling price of $16.74 for an autographed item of Joe Thornton. Sold items reached their highest average selling price in December 2017 with $327.76 and the month that saw the lowest prices with $0.99 was September 2015. In average, an autographed item from Joe Thornton is worth $19.99.

Most recently, these items with a signature of Joe Thornton were sold on eBay - click here for more items.

Panthers' Thornton: No decision on 25th season (05/25/22): Joe Thornton, who just completed his 24th season in the NHL and first with the Panthers, says he has not decided whether to retire or continue playing.

Sharks legend Joe Thornton's NHL future undecided after Panthers' playoff exit (05/25/22): Joe Thornton is taking things day by day when it comes to his NHL future and if he'll return for a 25th season.

Panthers’ Joe Thornton not thinking about NHL future just yet (05/25/22): The future Hockey Hall of Famer has played over 1,700 NHL games.

Panthers' Joe Thornton says he's undecided on playing future (05/25/22): Joe Thornton’s career may be over. The veteran center, who just completed his 24th season in the NHL and first with the Florida Panthers, said Wednesday that he has not decided whether to retire or continue playing. “My wife was kind of asking me last night,” Thornton said.

NHL Playoffs 2022: Joe Thornton among potential record-breakers (05/04/22): Players, coaches and teams will look to rewrite the postseason record book during the 2022 NHL playoffs. Here are some records that may soon be broken, and others that probably never will be.

Fantasy hockey waiver watch: Jesse Puljujarvi, Joe Thornton among top players to (02/2021): Victoria Matiash goes around the NHL and identifies the widely available fantasy options who are worth adding to your roster.

Maple Leafs' Joe Thornton out four weeks after fracturing rib against Oilers (01/2021): The injury occurred in the final period of Wednesday's game against Edmonton

Sharks' Joe Thornton says it's tempting to move to a Stanley Cup contender ahead (02/2020): Could the veteran forward be on the move before the trade deadline?

Offensive defensemen, Joe Thornton throat punches and what to be excited about i (12/2019): Here are some reasons to love hockey this week

NHL News: Highlights and lowlights from Joe Thornton's Bruins career (10/2019): Tuesday might mark Joe Thornton's final appearance in Boston, 22 years after the Bruins made him the top overall pick in the NHL Draft. Joe Haggerty looks back at Jumbo Joe's time in Boston.

Joe Thornton intends to end his NHL career in San Jose (11/2014): He’s had the prestigious “C” ripped off his chest and been blamed for so many of his team’s shortcomings, some critics probably consider a cup of stale arena beer to be his fault.

Joe Thornton Relives Glory Days, Awesome Haircut With Bruins (10/2014): A lot has changed in 17 years since Joe Thornton was drafted first overall by...

Adrian Dater’s spotlight on Sharks center Joe Thornton (12/2013): The Sharks are off to another solid start and Joe Thornton again is a big reason.

Sharks vs. Blackhawks: Joe Thornton levels Nick Leddy (11/2013): Welcome to next week, Leddy! Joe Thornton is a big man. There's no denying this. The San Jose Sharks captain also oozes skill and shows flashes of tenacity, so he's not the guy you want to get in the way of.

Joe Thornton's four-goal celebration remark sparks media debate, more NHL news l (10/2013): • The day after Joe Thornton’s stroke of genius, the media is debating whether it was appropriate to publish his plans for celebrating a four-goal game, should the opportunity arise.

Under Pressure: Joe Thornton (09/2013): Could be a career-altering year for the Sharks captain.

Joe Thornton propels Sharks over Canucks (04/2013): SAN JOSE -- Joe Thornton had a goal and an assist during a second-period scoring flurry and the San Jose Sharks beat the Vancouver Canucks 3-2 on Monday night for their fifth straight victory.

Sharks' Joe Thornton returns to ice in San Jose (01/2013): SAN JOSE -- Joe Thornton skated at Sharks Ice on Thursday for the first time in four months as players continued to trickle back in anticipation of a weekend start to training camp and the 48-game schedule that will follow.

NHL lockout: San Jose Sharks' Joe Thornton to play for Swiss team (09/2012): Logan Couture, who led the Sharks with 32 goals last season, is talking with Geneva in the same league where Thornton played during the 2004-05 lockout

Joe Thornton would love to see Sergei Samsonov back in the NHL (08/2012): He says the looming lockout is causing problems, however.

San Jose Sharks' captain Joe Thornton rescues team on the brink (04/2012): Thornton stepped up his game when team needed him most

San Jose Sharks 3-0-1 since Joe Thornton, Logan Couture, Joe Pavelski were made (03/2012): Thornton, Couture, Pavelski have made a winning combo

Joe Thornton on TJ Galiardi: “Everybody wanted to kill him” (02/2012): They probably like him a lot more now that he'll be in teal, though.

Scorers who got rich thanks to Joe Thornton (10/2011): Here's a look at some of the forwards that Joe Thornton made rich in his first 1,000 NHL games.

Sharks notebook: Joe Thornton tells media he is '100 percent' before game (05/2011): Captain mostly takes it easy during the morning skate

Sharks Joe Thornton nearing 1,000th career point (03/2011): With only five more points, Sharks captain Joe Thornton will reach 1,000, putting him in the elite company of only 77 players (out of 6,000 who have played in the NHL) to reach that mark.

As Sharks captain, Joe Thornton keeps intensity in locker room (02/2011): More than five years after his trade to the Sharks from Boston, and with Joe Thornton again the captain like he was for the Bruins, the perception of him as a laid-back 'Mr. Nice Guy' remains. But Thornton, and those around him, say reality is much different from the image.

San Jose Sharks notebook: Joe Thornton wishes rest of NHL would stop for Winter (01/2011): Sharks captain says of league's annual outdoor game: "It would have been nice if that was the only game on tap, and all the guys could watch it."

SAN JOSE, Calif. -- Joe Thornton just figured it was a matter of time before the (12/2010): Thornton and Dan Boyle scored power-play goals in the second period to help the Sharks win their season-high fourth straight game, 4-1 over the Phoenix Coyotes on Thursday night.