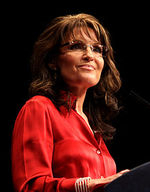 Sarah Louise Palin (/ˈpeɪlɪn/ (listen); née Heath; born February 11, 1964) is an American politician, commentator, author, and reality television personality, who served as the ninth governor of Alaska from 2006 until her resignation in 2009. As the Republican Party nominee for Vice President of the United States in the 2008 election alongside presidential nominee, Arizona Senator John McCain, she was the first Alaskan on the national ticket of a major political party, the first Republican female selected as a vice presidential candidate, and the second female vice presidential candidate representing a major American political party overall after Geraldine Ferraro. Her book Going Rogue has sold more than two million copies. More about Sarah Palin

The most expensive item with a signature of Sarah Palin (Sarah Palin Signed Rawlings OML Baseball mint PSA/DNA) was sold on eBay in February 2011 for $525.00 while the cheapest item (Good Tidings And Great Joy Sarah Palin - Signed in Special Bound 1st Ed.) found a new owner for $0.99 in March 2020. The month with the most items sold (10) was February 2018 with an average selling price of $14.61 for an autographed item of Sarah Palin. Sold items reached their highest average selling price in December 2010 with $312.49 and the month that saw the lowest prices with $1.99 was September 2017. In average, an autographed item from Sarah Palin is worth $14.99.

Current items with a signature of Sarah Palin

These are the most current items with a signature of Sarah Palin that were listed on eBay and on other online stores - click here for more items.

Traded items with a signature of Sarah Palin

Most recently, these items with a signature of Sarah Palin were sold on eBay - click here for more items.

Michele Bachmann Channels Sarah Palin as Absentee Muckraker (04/03/15): Michelle Bachmann did not seek reelection to the position in Congress that she rode to fame. She no longer has a seat at the table. But that doesn’t stop her from shouting at the table from a safe distance. In …

Sarah Palin: Netanyahu good for ‘heartland’ Americans (03/2015): Sarah Palin has not one but two posts on her Facebook page congratulating Benjamin Netanyahu on his reelection. Maybe two makes up for none from President Barack Obama.

Fact Checker: Sarah Palin’s inaccurate claim about suicides of veterans of the ‘ (02/2015): During her CPAC speech, Sarah Palin uttered an unreliable veteran suicide statistic that has little context or meaning -- and made it worse.

Julianne Moore Reveals Jitters About Playing Sarah Palin (12/2014): Of accepting the role, she says "I hung up the phone and went, 'What am I going to do?' "

GQ's Least Influential People of 2014: Barack Obama, Shia LaBeouf, Sarah Palin a (11/2014): The famous names on GQ's list of the least influential people of 2014 may surprise you! The mag has released their annual list of people they claim "took up vast clouds of...

Sarah Palin Doesn’t Know Where The White House Is [Video] (09/2014): Sarah Palin is far too busy to be occupied with insignificant matters like where the White Hous e is located. Simply put, she doesn’t know the address and didn’t bother to Google it before her speech at the Values Voter Summit this past Friday.

Stephen Colbert hopes to grab Sarah Palin fans with his own site (07/2014): Former Republican vice presidential candidate Sarah Palin has launched her own online channel, appropriately titled the Sarah Palin Channel. But Palin fans, be careful what URL you type in, or you could end up in the clutches of Stephen Colbert.

Sarah Palin predicted in 2008 that Putin would invade Ukraine if Obama was elect (03/2014): Long-derided as a soccer mom with a limited grasp of international geopolitical affairs, it turns out the world may have misunderestimated Sarah Palin.

Sarah Palin, But With Credentials (02/2014): With a Hillary candidacy looming, the first term New Hampshire senator is looking more and more like the GOP’s best veep choice to sure up the ticket in 2016.

Thanksgiving Throwback: The Sarah Palin turkey massacre (11/2013): Officially pardoning a turkey is an annual event leading up to American Thanksgiving. Before our partners to the south gobble-gobble, they give one or two birds a pass.

Poll Results: Sarah Palin (10/2013): Check out www.mcphersonsentinel.com every day for a new poll.

Sarah Palin's advice to Ted Cruz goes unheeded (09/2013): Sarah Palin told Fox News' Hannity that she had a great tip for Sen. Ted Cruz when he was trying to decide what to read on the Senate floor during his filibuster effort, but the legislator didn't take . . .

Sarah Palin: 'Let Allah Sort It Out' In Syria (08/2013): Former Alaska Gov. Sarah Palin (R) weighed in on the situation in Syria, attacking President Barack Obama and saying he should "let Allah sort it out."

Is Sarah Palin about to leave the Republican Party? Tea Party celebrity hints th (06/2013): Palin responded to a Fox viewer's Twitter question Saturday about the possibility of her and conservative commenter Mark Levin leaving the Republican Party and creating a new political group called the 'Freedom Party,' suggesting they might.

Sarah Palin Refuses Interview With Google Glass-Wearer (05/2013): Sarah Palin recently denied comment when she was approached by a reporter wearing Google Glass, and he suspects that all the controversy surrounding the state-of-the-art eyewear is behind it. Nilay Patel wore the glasses to cover the Indy 500 and …

Sarah Palin for Senate? Some Tea Party activists want her to run (04/2013): SEATTLE — Sarah Palin’s last elective position in Alaska ended early, when in 2009 she abandoned the governorship midway through her first term.

Sarah Palin Bizarrely, Wrongly Takes Credit for Marco Rubio (03/2013): In the new ad for 'SARAH PAC' released Wednesday, the former governor and Vice-Presidential candidate appears to take credit for several GOP stars' election into office. And some conservative writers are repeating the ad's claim that Palin helped place these half-dozen Republicans in office.

'Sarah Palin Is Not A Candidate In Eastleigh' (02/2013): One day ahead of the fiercely fought Eastleigh by-election, David Cameron ambushed Ed Miliband over past comments made the Labour candidate, comedian John O'Farrell, as...

Hillary beats Michelle Obama to top list of America's most admired women of 2012 (12/2012): The Secretary of State has won the accolade a total of 17 times - including the past 11 years - which is more than any other woman in the award's 52-year history.

Sarah Palin under fire for racist 'shuck and jive' attack on Obama (10/2012): Washington, Oct. 26 (ANI): Former Alaska governor Sarah Palin has stirred up controversy after she attacked President Barack Obama over his response to the US consulate attack in Libya.

Why Fox News is souring on Sarah Palin: 3 theories (08/2012): In 2008, Sarah Palin was the star of the GOP convention. For this year's RNC, she couldn't even secure an appearance on the cable news network that employs her

Leonard Pitts Jr. | On facts, lies and Sarah Palin (06/2012): “The America I know and love is not one in which my parents or my baby with Down syndro

Romney’s pick for running-mate will be no Sarah Palin-like ‘game change’ (04/2012): Analysis: Just as the U.S. presidential primaries wind down and the general election campaign gears up, the American political class becomes consumed with a singular question. Who will the candidate pick for vice-president?

'The Hunger Games' -- Why Katniss is like Sarah Palin (03/2012): COMMENTARY | "The Hunger Games," the smash hit film about a future oppressive government that forces teenagers to fight to the death, is heavy with allegory and political subtext. But what allegory and subtext depends on the eye of the beholder.

Sarah Palin lectures not selling. "They [lectures buyers] think she is a blither (02/2012): And they think right. A lecture is not a political rally. Folks pay big bucks to hear someone lecture on substance. The folks who invest in that with the expectation of selling tickets and make money . . .

Herman Cain and Sarah Palin: Do they still have political clout? (01/2012): When the political history of this era is written, two of the most colorful figures are likely to be Sarah Palin and Herman Cain.

Sarah Palin is "so pro-Tebow" (12/2011): Former Alaska Gov. jumps on the Tim Tebow bandwagon, admires his unabashed love for "Jesus of Nazareth"

Recent Events Prove Sarah Palin Isn’t Quite Done Yet (11/2011): Sarah Palin is still making headlines, nearly two months after ABC News reported she would not run for president. The group known as Conservatives4Palin.com bought an ad in Iowa valued at $6,500 urging her to reconsider her decision. The move comes a month away from the Iowa caucuses of Jan. 3.

Sarah Palin Supporters Meet Online to Discuss Life After Her Decision (10/2011): Sarah Palin’s most passionate supporters held an online forum today to assess what they should do going forward, now that the former Alaska governor has announced she won’t enter the GOP 2012 field. Participants of the forum, called Grizzlyfest, came together for three hours to...

Sarah Palin Stirs Confusion With Tea Party Rally Plans (08/2011): Sarah Palin found herself at the center of confusion swirling within the political community on Wednesday after it was reported that the former Alaska governor was "no longer confirmed" to appear at a Tea Party rally in Iowa this weekend.

Review: Sarah Palin documentary more infomerical than insight (07/2011): The Undefeated" is a slick version of those political-convention hagiographies ("A Man From Hope"), so it's not exactly an objective take on its subject, former Alaska governor and vice presidential candidate Sarah Palin.

What Michele Bachmann Learned From Sarah Palin (06/2011): OPINION: A look at how Palin's campaign woes might have blazed the trail for Bachmann's own campaign Poll Shows Bachmann Gaining Momentum Among N.H. GOP Voters Tom Petty Reportedly Wants Bachmann to Stop Using His Song

Sarah Palin's 2012 presidential plans still unclear (04/2011): WASHINGTON, D.C. — Sarah Palin's support among Republicans has shrunk and there's no evidence she's close to saying whether she will run for president in 2012.

Sarah Palin won't be announcing presidential run on April Fool's Day (03/2011): ANCHORAGE, Alaska -- Don't believe the hype. Despite speculation to the contrary, Sarah Palin will not be making a major announcement about her political future this Friday, sources told FOXNews.com Wednesday.

Jimmy McMillan: Sarah Palin, 'I Love You' (01/2011): Jimmy McMillan, who captured the political spotlight with his unsuccessful bid for New York governor during the 2010 midterm election season, professed his love for Sarah Palin in an interview with AOL News published Saturday.