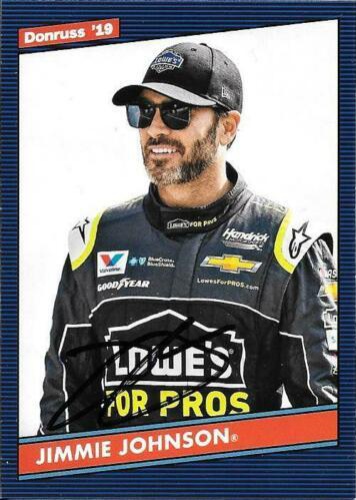 Current items with a signature of Jimmie Johnson

These are the most current items with a signature of Jimmie Johnson that were listed on eBay and on other online stores - click here for more items.

Traded items with a signature of Jimmie Johnson

The most expensive item with a signature of Jimmie Johnson (Jimmie Johnson Autographed Test Fire Suit. Excellent condition. ) was sold in June 2022 for $3000.00 while the cheapest item (JIMMIE JOHNSON - AUTOGRAPHED - 2006 Wheels High Gear - Card #MMB3 [n97]) found a new owner for $0.98 in November 2021. The month with the most items sold (46) was August 2021 with an average selling price of $22.00 for an autographed item of Jimmie Johnson. Sold items reached their highest average selling price in January 2009 with $150.00 and the month that saw the lowest prices with $0.99 was August 2014. In average, an autographed item from Jimmie Johnson is worth $23.00.

Most recently, these items with a signature of Jimmie Johnson were sold on eBay - click here for more items.

Johnson to drive No. 84 for Legacy Motor Club (01/11/23): — Jimmie Johnson on Wednesday revealed his rebranded NASCAR team and said he will drive the No. 84 — the reverse of his longtime No. 48 — when the seven-time champion competes...

Jimmie Johnson nets sponsor for '23 racing plans (09/09/22): Jimmie Johnson announced Friday that sponsor Carvana has agreed to fund next year's racing endeavors, and the seven-time NASCAR champion will use the next few weeks to determine his 2023 schedule.

JJ eyes IndyCar, IMSA, Le Mans for '23 schedule (06/23/22): After this weekend at Watkins Glen, Jimmie Johnson will start planning his 2023 schedule, which he hopes will include a full IndyCar schedule, more IMSA races and a spot in the 24 Hours of Le Mans.

Johnson open to driving Indy, NASCAR 'double' (05/26/22): Jimmie Johnson said he's open to racing in both the Indy 500 and the NASCAR Coca-Cola 600 on the same day in the future. Only four drivers -- Kurt Busch, Tony Stewart, Robby Gordon and John Andretti -- have accomplished the feat.

Johnson's hand pain-free during Indy test session (04/2022): Jimmie Johnson climbed as high as No. 3 on the daily speed chart before finishing the first of two Indianapolis 500 test sessions pain-free after having a screw inserted into his broken right hand on April 11.

Herta, Johnson earn surprising second at ROC (02/2022): The father-son tandem of Petter and Oliver Solberg beat the surprisingly competitive American team of Colton Herta and Jimmie Johnson on the the frozen Baltic Sea to win the Race of Champions Nations Cup.

IndyCar rookie Johnson passes 1st oval test (08/2021): Jimmie Johnson moved one step closer to adding the Indianapolis 500 to his IndyCar schedule with a successful test on his first oval.

Johnson targets Indy 500, wants to test ovals (07/2021): Jimmie Johnson wants to test the oval at Homestead-Miami Speedway as he works toward competing in the Indianapolis 500 in 2022.

Johnson 'more comfortable' with idea of Indy 500 (05/2021): Jimmie Johnson is no longer on the fence about, at minimum, testing on an oval and determining if that gets him an Indianapolis 500 seat next year.

J. Johnson on Rolex 24: 'It makes me feel alive' (01/2021): Jimmie Johnson, the seven-time NASCAR champ, said transitioning to his new career in IndyCar "makes me feel more alive than I have in quite some time."

Johnson heads star-studded team in Rolex 24 (12/2020): Jimmie Johnson will be teamed with Simon Pagenaud, Kamui Kobayashi and Mike Rockenfeller in the Rolex 24 at Daytona, considered the unofficial opener of the racing season.

Johnson gets Carvana to sponsor IndyCar ride (10/2020): Jimmie Johnson's new IndyCar ride will be sponsored by Carvana, as the seven-time NASCAR champ transitions to open-wheel racing in 2021.

NASCAR's Johnson joining IndyCar on 2-year run (09/2020): Jimmie Johnson will transition from NASCAR to IndyCar with Chip Ganassi Racing in a partnership that could pair two of the most dominant drivers of this generation on one team.

Jimmie Johnson wants 'voice' in shifting culture (06/2020): Jimmie Johnson said that perhaps he hasn't been vocal enough on social justice issues, but that he is working to change that.

Daytona 500 starts Jimmie Johnson's farewell tour (02/2020): Jimmie Johnson, seeking his first win in 95 races, has a goal to remain relevant in his final NASCAR season as a full-time driver.

New year, new start for both Jimmie Johnson, Chad Knaus (12/2018): The Hendrick Motorsports driver and crew chief have already begun preparing for the 2019 Cup season with their new teams.

Chevy to power McLaren's effort for Fernando Alonso at Indy 500 (11/2018): Fernando Alonso’s McLaren effort in the 103rd Indianapolis 500 will be powered by Chevrolet.That deal was officially announced at 7 a.m. Eastern Time on December 4, but it was considered a ...

NASA, NASCAR driver Jimmie Johnson to talk about 'drag' (04/2015): NASA has long had a strong working relationship with the world of sports car racing, spinning off space technologies that help make race cars faster and safer.

Jimmie Johnson Q&A: 'We are headed in the right direction' (03/2015): The six-time champ shares his thoughts on NASCAR's new aero package, Jeff Gordon's retirement and more.

Jimmie Johnson looks to have fun chasing seventh Sprint Cup title (12/2014): NASCAR on Fox's Chris Myers sits down with Jimmie Johnson to talk about his 2014 season, and what we should look for in the 2015 NASCAR Sprint Cup season.

Jimmie Johnson on being out of Chase: 'We went down swinging' (10/2014): There will be no succcessful defense of his 2013 Sprint Cup championship, no record-tying seventh career title for Jimmie Johnson this season. He's eliminated from the 2014 Chase for the Sprint Cup after a finish of 24th in Sunday's Geico 500 at Talladega Superspeedway.

Human or still Superman? Dover will be revealing for Jimmie Johnson (09/2014): Jimmie Johnson owns a record nine career wins on the Monster Mile that is Dover International Speedway. Whether or not he can at least contend for No. 10 this Sunday will tell a whole lot about his chances for winning his second consecutive Sprint Cup championship and a record-tying seventh overall.

Jimmie Johnson remembers when he figured out how to race at Indy (07/2014): SPEEDWAY, IND. | Jimmie Johnson got a revelation in the middle of the 2005 race at the Indianapolis Motor Speedway. Much like driving down the interstate with your blinker on, Johnson was relieved, if not amused, by the simple solution.

'Slump' behind him, Jimmie Johnson arrives in Kentucky on a roll (06/2014): Jimmie Johnson's team started attracting critics when it went winless in this season's first 11 NASCAR races. My, how the script has flipped since then.

Fan of Jimmie Johnson? Rest easy -- he's officially back (05/2014): With a victory in last Sunday night's Coke 600, the six-time Sprint Cup Series champion put to bed a 13-race drought and more importantly proved that his slow start to 2014 is not a big deal moving forward.

Jimmie Johnson not feeling the love from Richmond (04/2014): Odessa-Montour Junior/Senior High School held its prom on Friday at Watkins Glen International. - 10:15 am

Jimmie Johnson's in-law dies in skydiving accident (03/2014): The county medical examiner's office says in a statement Monday that Jordan Jor-El Janway died Sunday while skydiving with two others at Jamul.

Jimmie Johnson has a chance to be the greatest with 14’ Chase championship title (01/2014): When NASCAR announced it would be changing up the Chase format by adding four drivers to the previous total of 12 along with adding a knockout format in the final races for added drama, many thought it was just simplify the sport and draw more fans.

Jimmie Johnson is not hurting NASCAR (11/2013): In an attempt to keep up with auto racing news now that the off-season is upon us, I was surveying various industry websites, including the best — ESPN’s Jayski.com — when I came across this headline: “Jimmie Johnson is slowly killing NASCAR.”

Mark Story: Jimmie Johnson's trip takes a turn for the worse (06/2013): Of the first 248 laps in a scheduled 267-lap race, Jimmie Johnson led 182. Then fate and Matt Kenseth threw Johnson a harsh twist that left the normally unflappable Johnson fuming.

NASCAR: Jimmie Johnson fastest in Sprint Cup practice (05/2013): DOVER -- Jimmie Johnson is trying to leave NASCAR legends Richard Petty and Bobby Allison in the dust when it comes to the history book at Dover International Speedway.

NASCAR driver Jimmie Johnson , Michigan International Speedway team up to offer (03/2013): The $48 ticket offer, which includes a question-and-answer session with Johnson sold out last year in June and August.

Jimmie Johnson and Lewis Hamilton make the cut as popular Instagram users (01/2013): The folks over at SI.com have compiled a list of "The 60 best athletes to follow on Instagram," and the racing world was represented.

Lars Anderson: Jimmie Johnson, Denny Hamlin top list of drivers to watch for in (12/2012): In anticipation of the new year, SI.com's writers are predicting the stories (or drivers) they think will define the sports landscape in 2013.

7 signs Jimmie Johnson's dominance is over (11/2012): Sorry, Jimmie Johnson fans, but it's time to face facts: your guy's run is over.

Jimmie Johnson in position for another title (10/2012): Nobody knows how to play the Chase game better than Jimmie Johnson.

Jimmie Johnson will have Monster mental edge at Dover (09/2012): At a track he dominates, pursuers Brad Keselowski and Denny Hamlin typically struggle.

Jimmie Johnson honors Dan Wheldon before Coca-Cola 600 (05/2012): CONCORD, N.C. — The Indianapolis 500, understandably and emotionally, was a day-long homage to one of the fallen heroes of IndyCar Racing, Dan Wheldon.

Missed opportunities haunt slumping Jimmie Johnson (03/2012): Jimmie Johnson has a Sprint Cup winless streak of 11 races, but has had success at Martinsville Speedway.

Jimmie Johnson a forgotten champ in Sprint Cup (11/2011): It has been a long time since Jimmie Johnson was an also-ran in the Sprint Cup’s season-finale race at Homestead-Miami Speedway.

Jimmie Johnson back at Infineon to play defense (06/2011): There have been six different winners in the past six years in the Toyota/Save Mart 350. During most of those years, Jimmie Johnson struggled mightily with the road course at Infineon Raceway. His turn finally came last...

Jimmie Johnson shows off new video game at CMS (05/2011): Race fans visiting the Time Warner Cable interactive area at Charlotte Motor Speedway Saturday got to see one of their favorite drivers up close and in action. Jimmie Johnson gave fans a hands-on demonstration of his upcoming video game, "Jimmie Johnson's 'Anything With an Engine.'"

Kevin Harvick overcomes Jimmie Johnson on the final lap for a dramatic victory i (03/2011): Kevin Harvick smiles during a press conference after winning the Auto Club 400 in Fontana on Sunday. A very exciting finish. A huge increase in attendance. A lack of rain.

Jimmie Johnson, NASCAR making their next pit stop: Phoenix (02/2011): Heat Index: It's time to strap in because Jimmie Johnson and NASCAR are coming to town.

Continuity equals success for champ Jimmie Johnson (01/2011): The concept seems simple: If you're successful, stick together. The application, though, has been difficult for even championship teams in the ...