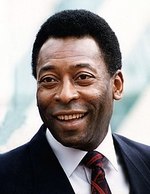 Edson Arantes do Nascimento (Brazilian Portuguese: ; born 23 October 1940), known as Pelé (Portuguese pronunciation: ), is a Brazilian former professional footballer who played as a forward. Regarded as one of the greatest players of all time and labelled "the greatest" by FIFA, he was among the most successful and popular sports figures of the 20th century. In 1999 he was named Athlete of the Century by the International Olympic Committee and was included in the Time list of the 100 most important people of the 20th century. In 2000, Pelé was voted World Player of the Century by the International Federation of Football History & Statistics (IFFHS), and was one of the two joint winners of the FIFA Player of the Century. His 1,279 goals in 1,363 games, which included friendlies, is recognised as a Guinness World Record. More about Pele

Current items with a signature of Pele

These are the most current items with a signature of Pele that were listed on eBay and on other online stores - click here for more items.

Traded items with a signature of Pele

Most recently, these items with a signature of Pele were sold on eBay - click here for more items.

President Gianni Infantino says FIFA will request a stadium in every country be (01/02/23): Legendary Brazilian soccer player will be laid to rest on Tuesday

Pelé funeral details: Santos FC's Vila Belmiro Stadium will host wake services o (12/30/22): Fans from all over will flock to the city of Santos to pay homage to the king of football after the new year

What Pelé meant to Brazil and the world: 'O Rei' was the architect and his joyou (12/30/22): Welcome to Friday's edition of the Golazo Starting XI newsletter where we celebrate the life of a king

Pelé dies at 82: Soccer world mourns death of iconic Brazilian player (12/29/22): The entire sport of soccer is mourning the death of an icon

Brazilian soccer legend Pele in 'stable' condition after being hospitalized with (12/2021): Pele, 81, underwent surgery on the tumor on Sept. 4 and is currently getting 'follow-up treatment' in Brazil

Pele refuses to acknowledge Cristiano Ronaldo and Lionel Messi breaking his goal (01/2021): This decision was helped along by former club Santos

Pele, Cristiano Ronaldo, other sports stars react to death of soccer legend Dieg (11/2020): Maradona died on Wednesday at the age of 60

Brazilian legend Pele is 'depressed' and 'embarrassed to leave the house' due to (02/2020): One the greatest soccer players to ever set foot on this planet is having difficulties with his ability to walk

Pele's '1,000th goal' scored 50 years ago (11/2019): The revered Brazil striker Pele scored his 1,000th goal on November 19, 1969 at Rio de Janeiro's Maracana stadium in a match between his beloved Santos and local outfit Vasco de Gama, whose vast ranks of fans gave the iconic No. 10 a standing ovation. Pele, a national hero after helping Brazil to

GYEEDA cheques at Abuga Pele trial (02/2015): An accountant attached to the Ghana Youth Employment and Entrepreneurial Development Agency (GYEEDA), Eric Sunu, yesterday said an invoice was raised for a total of $2 million in the infamous GYEEDA scandal.

Hawaii’s Most Wanted: Pele Kotani Jr. (01/2015): Honolulu police are asking for your help in finding a man with more than a dozen convictions.

Hospital: Pele is lucid and talking (11/2014): Pele, 74, is battling kidney problems, but the hospital says he's recovering and doctors plan to take him off dialysis early Sunday. "I am blessed to receive your love and support," Pele tweeted earlier in the week.

Pele to watch Ghana in friendly against Nigeria (10/2014): World football icon Pele, has been invited to witness Nigeria’s international friendly against Ghana being used to commission the newly-built stadium in Uyo.

Soccer Legend Pele To Marry (08/2014): Brazilian soccer legend Pele is to marry for a third time at the age of 73. The sports star has announced he is planning to tie the knot with a businesswoman 32 years his junior named Marcia Cibele Aoki. The pair has been dating since 2010, according to Britain's The Sun newspaper.

Stray of the Day: Pele (07/2014): Get Surrey searches for loving fur-ever homes for stray and unwanted pets

Pele: FIFA punishment for Suarez bite is fair, proportionate (06/2014): Brazil legend Pele believes the punishment FIFA handed out to Luis Suarez following his bite on Giorgio Chiellini is a fair and proportionate one.

Pele calls David Beckham's MLS hopes for Miami 'fantastic, important' (04/2014): Pele, who once served as one of the main ambassadors of professional soccer to the United States, says David Beckham trying to bring the MLS back to Miami is something to be excited about.

Soccer Legend Pele to Participate in a Special Town Hall Event with SiriusXM Lis (03/2014): NEW YORK, March 31, 2014 /PRNewswire/ -- SiriusXM announced today that legendary soccer star Pele will sit down for an exclusive Q&A with an in-studio audience at the SiriusXM Studios in New York City ...

Pelé of Brazil (02/2014): The 73-year-old football legend Pelé of Brazil recently visited Egypt. It has been over 41 years since Pelé, or the “Black Pearl”, visited Cairo.

VIDEO: On this day: Pele retires (09/2013): On 1 October 1977, Brazilian legend Pele retired from professional football with an exhibition game for New York Cosmos against his former Brazilian side Santos.

Messi, Pele, and Maradona will all play for Farnborough FC this season (08/2013): In a move that feels directly out of a B movie, struggling Farnborough Football Club of England's Conference South have assembled what, on paper, looks like the greatest cross-generational soccer team of all time.

Cosmos return excites Pele (07/2013): The Empire State Building will be bathed in green tonight when Pele turns on the lights to commemorate Saturday’s return of the Cosmos. Once the premier soccer franchise in North America, the Cosmos return after a 28-year hiatus when they play host to the Fort Lauderdale Strikers in a...

Pele Mountain Announces Closing of First Tranche of a Private Placement Offering (06/2013): Pele Mountain Resources Inc. is pleased to announce that it has closed the first tranche of a non-brokered private placement offering comprised of 6,905,809 flow-through units at a purchase price of $0.07 ...

Gordon Banks interview: Legendry goalkeeper talks about England's future, the Pe (05/2013): MICHAEL WALKER interviews GORDON BANKS: The goalkeeper wonders if the 1996 World Cup triumph can ever happen again and even whether this England team will make it to next summer's finals.

Pele, Diego Maradona, Sir Elton John, Mick Jagger: Football and Music - Golden Y (04/2013): Football and music have often been happy bedfellows over the years, and the latest in our Golden Years series focuses on them both, with some memorable images from the archives.

Pele 's son feels 'responsibility' (03/2013): Rio de Janeiro, March 31 (IANS) The youngest son of Brazilian footballing idol Pele admitted to feeling the responsibility of following in his father's footsteps but asked not to be compared with the former great.

Pele to miss England Awards (01/2013): Brazilian legend misses Awards, but will be Guest Of Honour at Wembley next week

Pele got lucky: Garrincha (11/2012): Late Brazil star Garrincha believed contemporary great Pele got lucky as he had such a brilliant ensemble playing alongside him in his glory years, it...

Pele: Spain are world´s best (09/2012): Brazil legend Pele has labelled Spain as the best team in the world, but is unsure if they will defend their World Cup crown.

Pele’s Santos go global (08/2012): It was 50 years ago to the day that O Rei Pele led a stunning Santos side to their first Copa Libertadores crown against Penarol in Buenos Aires. FIFA.com tells the tale of Santos' global coming-out party.

Pele: The greatest of them all (06/2012): In the year 2000, Pele was named Player of the Century by FIFA. Our Video of the Week pays tribute to the Brazilian’s stunning skill and technique. Watch and enjoy!

Young Pelé: Soccer's First Star (04/2012): Comments that include profanity, personal attacks, or antisocial behavior such as "spamming", "trolling", or any other inappropriate material will be removed from the site. We will take steps to block users who violate any of our terms of use. You are fully responsible for the content you post.

Pele says Messi still has some improving to do (01/2012): PARIS — Pele thinks Lionel Messi still needs to improve at international level before he can be considered the greatest soccer player ever and needs to score more goals to come close to matching the Brazilian great.

Pele: Barcelona's trophy cabinet not on par with Santos' (12/2011): The Brazil legend has stoked up the fires prior to the showpiece in Yokohama, insisting that despite the Spaniards being the better team, his former side have been more successful

October 1 – Pele’s Last Game (09/2011): Pele is the greatest footballer of all time and the legend made his final appearance in a testimonial match on this day in soccer history in 1977 at Giants Stadium. The Brazilian played the first half for the New York Cosmos and the second with Santos.

Abedi Pele: I have no problem with Yeboah (08/2011): Legendary Abedi Pele has dismissed claims that there is a bone of contention between himself and former Frankfurt forward Tony Yeboah. According to the ex-Black Stars captain, he was on good terms with the former joint Bundesliga top scorer.

Pele gives advice to Neymar (06/2011): Soccer great Pele said Wednesday he has personally told young Brazil striker Neymar to stop diving. Pele acknowledged that Neymar is at a disadvantage because he is not as strong as most defenders trying to mark him, but said he is "exaggerating" with his attempts to get referees to award fouls.

Soccer: NZF chase legend Pele (05/2011): Edison Arantes do Nascimento, or Pele as he is better known, tops a list of famous footballers New Zealand Football want to bring to this country to raise funds for the Christchurch earthquake.The national body initially wanted...

Brazil risks embarrassment: Pele (03/2011): It's 8 p.m. at Sao Paulo's sublimely overcrowded international airport and Marvin Curie, seeing all the chairs around him taken, decides to join dozens of other business travellers and sit on the floor.

Pele sends warning to Brazilian World Cup organizer (02/2011): Soccer legend Edson Arantes do Nascimento, or Pele, declared on Friday his concern with the little amount of progress made towards the 2014 World Cup in Brazil.

Pele Backs Tottenham's Bid For Olympic Stadium: I Don't Understand Why You Would (01/2011): Brazilian legend backs Spurs plans for "a great stadium"