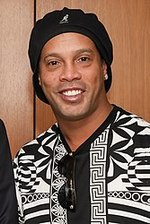 Ronaldo de Assis Moreira (born 21 March 1980), commonly known as Ronaldinho Gaúcho (Brazilian Portuguese: ) or simply Ronaldinho, is a Brazilian former professional footballer and ambassador for Barcelona. He played mostly as an attacking midfielder, but was also deployed as a forward or a winger. He played the bulk of his career at European clubs Paris Saint-Germain, Barcelona and A.C. Milan as well as playing for the Brazilian national team. Often considered one of the best players of his generation and regarded by many as one of the greatest of all time, Ronaldinho won two FIFA World Player of the Year awards and a Ballon d'Or. He was renowned for his technical skills and creativity; due to his agility, pace and dribbling ability, as well as his use of tricks, feints, overhead kicks, no-look passes and accuracy from free-kicks. More about Ronaldinho

The most expensive item with a signature of Ronaldinho (Immaculate 2019 Ronaldinho Superior Swatch Signature Match Worn Brazil Logo 1/1!) was sold on eBay in July 2019 for $8990.00 while the cheapest item (Ronaldinho Brazil A.C. Milan signed 3x5 index card) found a new owner for $0.01 in May 2009. The month with the most items sold (25) was May 2008 with an average selling price of $99.00 for an autographed item of Ronaldinho. Sold items reached their highest average selling price in December 2016 with $699.99 and the month that saw the lowest prices with $3.99 was March 2013. In average, an autographed item from Ronaldinho is worth $80.49.

Current items with a signature of Ronaldinho

These are the most current items with a signature of Ronaldinho that were listed on eBay and on other online stores - click here for more items.

Traded items with a signature of Ronaldinho

Most recently, these items with a signature of Ronaldinho were sold on eBay - click here for more items.

Brazilian soccer legend Ronaldinho still detained in Paraguay over false passpor (03/09/20): Ronaldinho will be forced to stay in Paraguay until the current situation is resolved

Brazilian soccer legend Ronaldinho detained in Paraguay over false passport clai (03/05/20): Ronaldinho will be forced to stay in Paraguay until the current situation is resolved

Ronaldinho, Ronaldo and CR7 selected in Kaka's Dream Team (03/2015): Brazilian superstar Kaka revealed his all-time Dream Team to the Daily Mail, containing the best players he has played with and against...

Barcelona's evolution from Ronaldinho to Neymar: in pictures (02/2015): In pics: As Manchester City face Barcelona in the Champions League, we chart the team's development from also-rans to all-time greats

Queretaro fitness coach: Ronaldinho doesn't like running (01/2015): A coach at Queretaro has revealed the ex-Barcelona star needs a specific training routine because he is not keen on running for extended periods

Kabuscorp in talks with Ronaldinho agent (11/2014): The former Ballon d'Or winner is only two months into a two-year contract with Mexican club Queretaro but the Angolan outfit are desperate to sign the Brazilian

Ronaldinho kicks opponent in the FACE but Queretaro star signing escapes punishm (10/2014): Not many people would appreciate a kick to the face from an opponent, let alone offer to shake their hand afterwards... unless that opponent is Brazilian World Cup winner Ronaldinho, of course.

Ronaldinho penalty helps Queretaro defeat lowly Chivas (09/2014): Ronaldinho scored from the penalty spot and assisted on a second goal as Queretaro beat relegation-threatened Chivas 4-1 in the Mexican league on Sunday.

Brazilian star Ronaldinho in talks with ISL's Chennai Titans: report (08/2014): If progress is made, Ronaldinho and his agent will arrive in India to finalise the deal, a source told The Hindu .

Ronaldinho rents out mansion for World Cup (05/2014): Former Brazil football star Ronaldinho is hoping to rent out his mansion in Rio de Janeiro during the World Cup for about $16,700 a night.

Ronaldinho is the greatest I ever played with, says Henrik Larsson (04/2014): The 42-year-old has spoken of his admiration for the Brazilian, while adding that winning the 2006 Champions League was his finest moment as a player

THE BLOG FROM BRAZIL: No World Cup party for Ronaldinho, two Arsenal flops shine (03/2014): Ronaldinho gets confirmation he will play no part in Brazil's World Cup plans on 34th birthday, Arsenal flops Julio Baptista and Andre Santo star and there's a classic own goal to enjoy.

Video: Ronaldinho shows he's still got it in training (11/2013): Ronaldinho may be 33 years old but the Brazilian can still produce flashes of brilliance, as this video of him in training proves.

Cazorla says 'magical' Ozil can 'define era' at Arsenal like Zidane, Ronaldinho (10/2013): London, Oct 25 (ANI): Arsenal star Santi Cazorla has said that he believes Mesut Ozil has the ability to define an era at the club like Zinedine Zidane and Ronaldinho.

Ronaldinho hears from Brazil leader after injury (09/2013): SAO PAULO (AP) Ronaldinho has received support from Brazilian President Dilma Rousseff after tests showed he may miss the Club World Cup in December because of injury.Rousseff used her Twitter account to express solidarity with...

Ronaldinho's prodigy: Bernard can become a Brazilian superstar (06/2013): Having been mentored by the former Selecao icon, the 20-year-old has all the attributes to become one of his country's leading stars if he maintains his current trajectory

Up front with Messi, in the Ronaldinho role - where will Neymar fit in at Barcel (05/2013): The Brazilian has signed a five-year contract with the Catalan club and will be expected to shine on a European stage next season. But how will he be used at Camp Nou?

Ronaldinho named Brazil captain against Chile (04/2013): Ronaldinho will captain Brazil in its friendly against Chile , moving into a strong position to confirm his spot in the Confederations Cup squad.

Ronaldinho Playing Keepy-Uppy With a Little Kid is Pretty Darn Cute (03/2013): The kid has some game and enough chutzpah to make Ronaldinho wait while he does his bicycle kick.

Ronaldinho is victim of one of the worst tackles ever - VIDEO (02/2013): We've seen some horror tackles from the likes of Nigel De Jong, Roy Keane and Ben Thatcher. But Argentine defender Biego Braghieri, 26, took X-rated challenges to a new low with this wild lunge at Ronaldinho.

Ronaldinho gets Brazil recall by Scolari for England friendly – video (01/2013): Brazil coach Luiz Felipe Scolari has given Ronaldinho a recall to the Brazil squad for the friendly against England on 6 February

Ronaldinho wants World Cup spot (12/2012): Brazil star Ronaldinho has reiterated he wants to be part of the squad at the next World Cup.

Ronaldinho not looking for revenge against Flamengo (10/2012): Rio de Janeiro, Oct 31 (IANS) Atletico Mineiro star Ronaldinho has denied he will be seeking revenge when his team hosts Flamengo in Brazil's Serie A championship.

Brasileiro results Round 11: Ronaldinho finds the net but youngster Bernard is t (07/2012): The 19-year-old continued his fantastic start to the season with a mesmerising display that eclipsed the likes of the former Barcelona man as Galo kept their lead at the summit

March 21: Ronaldinho Born (03/2012): Ronaldinho has been making waves in the soccer world since he was filmed as small boy playing pick up soccer and it was in 1980 on this day in soccer history that the talented Brazilian was born.

Report: Ronaldinho picked ahead of Ganso for Brazil against Bosnia and Herzegovi (02/2012): Mano Menezes has opted for the former Barcelona and AC Milan attacker ahead of Santos' playmaker who has come under criticism in recent months for his performances

Kick Off: Could Ronaldinho replace Beckham in LA? (12/2011): Is Brazilian star Ronaldinho headed to Southern California? There’s only one David Beckham, as the song goes.

Ronaldinho to goal against AIDS (10/2011): New York, Oct 21: The United Nations has a new striker on its team to defeat HIV/AIDS, Brazilian soccer star Ronaldinho, who will now parlay his devastating skills on the sports field into raising awareness among young people worldwide to help block further infections.

Brazil's Ronaldinho wants to play at 2012 Olympics (09/2011): The Brazilian star has won several major tournaments but not an Olympic gold medal.

Ronaldinho handed Brazil recall (08/2011): Veteran striker Ronaldinho has been handed a surprise recall to the Brazil squad for next month's friendly against Ghana, with coach Mano Menezes opening the door to the 2014 World Cup finals.

Ronaldinho 'party-hotline' has former World Player of the Year back on form (06/2011): A brace of inspired performances from Ronaldinho has given fans of Flamengo every right to celebrate.

Kaka & Ronaldinho notable absences as Mano Menezes announces Brazil squad to tak (05/2011): The Real Madrid and Flamengo playmakers are set to miss out on the Copa America, after being left out of a 28-man list to play Brazil's next two friendly encounters.

Ronaldinho Is Still Really, Really, Ridiculously Good at Soccer (03/2011): Here is a clip of Ronaldinho from a recent match in Brazil. The ball comes at him straight from the sky. He kills it and controls it with one touch of his foot. Most MLS players can't control a simple square pass that cleanly. How does someone have a sustained stretch as the world's best [...]

Ronaldinho: I'm Sad At Ronaldo's Retirement As He Was My Idol (02/2011): Ronaldinho describes sadness at Ronaldo's retirement from football.

Ronaldinho Scores From Behind The Goal During Flamengo Training Session (01/2011): On Tuesday, Ronaldinho showed that he can do anything with a soccer ball during a Flamengo training session. Standing several feet behind the goal , the soccer star casually took shots and put the ball in front of the net. He put enough spin on the ball to make it bounce back into the goal.