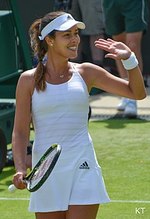 Ana Schweinsteiger (Serbian: Ана Швајнштајгер / Ana Švajnštajger; born 6 November 1987), professionally known by her birth name Ana Ivanovic (Ана Ивановић / Ana Ivanović, pronounced  (listen)), is a Serbian former world No. 1 tennis player. She gained the top ranking in 2008 after she won the 2008 French Open, and held it for a total of 12 weeks. She was also the runner-up at the 2007 French Open and the 2008 Australian Open, losing to Justine Henin and Maria Sharapova respectively. She qualified for the year-end WTA Tour Championships three times, in 2007, 2008 and 2014 and won the year-end WTA Tournament of Champions twice, in 2010 and 2011. More about Ana Ivanovic

Current items with a signature of Ana Ivanovic

These are the most current items with a signature of Ana Ivanovic that were listed on eBay and on other online stores - click here for more items.

Traded items with a signature of Ana Ivanovic

The most expensive item with a signature of Ana Ivanovic (Rally For Relief: Ana Ivanovic signed Yonex E-Zone 100) was sold in January 2011 for $1225.00 while the cheapest item (Ana Ivanovic signed photo 5X7) found a new owner for $0.01 in October 2010. The month with the most items sold (11) was September 2009 with an average selling price of $9.99 for an autographed item of Ana Ivanovic. Sold items reached their highest average selling price in November 2013 with $455.00 and the month that saw the lowest prices with $0.81 was September 2017. In average, an autographed item from Ana Ivanovic is worth $23.25.

Most recently, these items with a signature of Ana Ivanovic were sold on eBay - click here for more items.

Bayern Munich stars attend Ana Ivanovic's Western party after Stuttgart win (03/10/15): It's been a tricky start to the year for Bayern Munich, but after defeating Stuttgart to win their first game of 2015, the German giants celebrated - Western style!

EXCLUSIVE INTERVIEW: Ana Ivanovic - Embracing expectations and learning to let g (02/18/15): Earlier this month, she hosted a costume party for Schweinsteiger’s entire Bayern Munich team in Germany where she dressed up as The Lone Ranger. “It’s perfect, right?” Ivanovic jokes when discussing her costume, and the thought of how a mask could help her go out unnoticed.

Ana Ivanovic's hopes of title dashed in Australian Open first round (01/2015): A year after defeating No. 1 Serena Williams to reach the quarterfinal at the Australian Open, the Serbian lost to 142nd-ranked Czech qualifier Lucie Hradecka on Monday. Read more

Ana Ivanovic serves up a storm playing role of air stewardess during flight to S (12/2014): Tennis players know the importance of staying hydrated and Ana Ivanovic made sure her fellow professionals weren't left feeling thirsty during a flight on Monday.

Ana Ivanovic on Filipino crowd: They were amazing (11/2014): MANILA, Philippines - It didn't take long for tennis grand slam champion Ana Ivanovic to win over the adoration of the Filipino crowd during day one of the 2014 Coca-Cola International Premier Tennis League Manila Leg at the Mall of Asia Arena on Friday, November 28. Ivanovic, a ...

Ana Ivanovic downs Bouchard for first Singapore win (10/2014): Ana Ivanovic recovered from her opening loss to race to a 6-1 6-3 victory over an out-of-sorts Eugenie Bouchard.

Ana Ivanovic lone upset in US Open 2nd round (08/2014): Ana Ivanovic's comeback tour has ended with yet another early exit at the U.S. Open.

Wimbledon 2014: Sabine Lisicki copes better with the delays to come through agai (06/2014): German former finalist overcomes loss of second set against the Serbian former world No1 to set up fourth-round clash with Yaroslava Shvedova

A Fan’s View: Ana Ivanovic (04/2014): In 2008, Ana Ivanovic won the French Open and Indian Wells, was a finalist at the Australian Open and ascended to No. 1 in the WTA Tour rankings. She’s spent the last half decade trying to regain that lofty status in the game, having plummeted to No. 65 two years after her Grand Slam breakthrough.

Ana Ivanovic disorients Pennetta from improving at Miami! (03/2014): Having started the match slowly, once Ana Ivanovic was in form Pennetta seemed speechless. Ana Ivanovic was able to hammer down 21 winners and 5 aces, and achieved a 6-4 and 6-3 win within 77 minutes...

Ana Ivanovic progresses at Qatar Open (02/2014): Ninth-seeded Ana Ivanovic of Serbia advanced to the second round of the Qatar Open on Tuesday after Slovakia's Daniela Hantuchova retired from their match with a right knee injury.

Sportswoman of the day: Ana Ivanovic (11/2013): We introduce you to one extraordinary sportswoman every day! Continue reading ...

Ana Ivanovic locked in for ASB Classic (09/2013): Former French Open champion Ana Ivanovic will be the main drawcard when the ASB Classic gets underway in Auckland on December 30.

Wimbledon 2013: Eugenie Bouchard stuns Ana Ivanovic in straight sets (06/2013): There may have been discontent among the Centre Court crowd when told their first match of the day, featuring Victoria Azarenka, had been cancelled due to the No 2 seed’s withdrawal.

Ana Ivanovic reaches Dubai second round (02/2013): Former French Open champion Ana Ivanovic beat Anastasia Pavlyuchenkova 6-3 7-6 in the first round of the Dubai tennis championships while US, teenager Sloane Stephens was eliminated in three sets to cap a miserable debut trip to the Gulf.

US Open 2012: Ana Ivanovic, Jelena Jankovic move into 3rd round (08/2012): NEW YORK — A week before the start of the U.S. Open, Ana Ivanovic couldn't walk without pain in her right foot. "That's when I started to panic a little bit," she said Thursday. Two matches into the tournament, the 2008 French Open champion is feeling healthy — and relaxed. ...