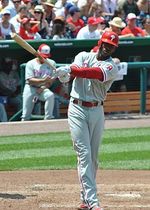 Domonic Larun Brown (born September 3, 1987), is an American former professional baseball outfielder. He made his Major League Baseball (MLB) debut with the Philadelphia Phillies in 2010, after being named the Phillies' top prospect in 2009 and the top prospect in all of MLB, in 2010 by Baseball America. More about Domonic Brown

Current items with a signature of Domonic Brown

These are the most current items with a signature of Domonic Brown that were listed on eBay and on other online stores - click here for more items.

Traded items with a signature of Domonic Brown

The most expensive item with a signature of Domonic Brown (DOMONIC BROWN SIGNED Phillies #9 Cream Jersey JSA Auth.) was sold in August 2013 for $179.99 while the cheapest item (DOMONIC BROWN PHILLIES SIGNED AUTO GAME USED BASEBALL) found a new owner for $0.01 in June 2010. The month with the most items sold (35) was August 2010 with an average selling price of $19.00 for an autographed item of Domonic Brown. Sold items reached their highest average selling price in November 2012 with $67.00 and the month that saw the lowest prices with $0.01 was July 2009. In average, an autographed item from Domonic Brown is worth $17.00.

Most recently, these items with a signature of Domonic Brown were sold on eBay - click here for more items.

Domonic Brown healing but could miss opener (03/24/15): CLEARWATER, Fla. - Domonic Brown's status for opening day may be in doubt because of moderate tendinitis in his left Achilles, but the Phillies rightfielder said Tuesday he was making progress.

Domonic Brown dealing with tendinitis in his left Achilles (03/20/15): The Phillies' spring hasn't gone very well, but they appear to have avoided a serious injury with Domonic Brown.

Schmidt takes Domonic Brown under his wing (02/2015): CLEARWATER, Fla. - The greatest hitter in Phillies history gripped a red bat Wednesday afternoon. He had just finished overseeing batting practice for his hitting group and was demonstrating for an observer the focus of his work with his most-scrutinized student.

Phillies tender contracts to Ben Revere, Domonic Brown, Antonio Bastardo (12/2014): Congratulations! Your weather is set to . You can change the location at any time. Don't have an account?

If Phillies move on, Domonic Brown says he will “definitely have a job somewhere (10/2014): Domonic Brown thinks he'll be able to find a starting job if the Phillies aren't interested in keeping him around in 2015.

Report: Phillies “will look to trade” Domonic Brown (09/2014): Last season Domonic Brown was an All-Star for the Phillies, hitting .272 with 27 homers and an .818 OPS to finally break through at age 25 after years as a top prospect in waiting.

WATCH: Mets CF Juan Lagares throws out Phillies' Domonic Brown at the plate by a (08/2014): Congratulations! Your weather is set to . You can change the location at any time. Don't have an account?

Phillies: Domonic Brown running out of time to turn season around (06/2014): A list of what has gone wrong for the 2014 Phillies has to be topped by their enigmatic 26-year-old left fielder, who most likely has only played as much this season because of a lack of options in the Phillies' system, both on the major-league level and in the minors.

Phillies Fans Want Darin Ruf To Play In Favor Of Domonic Brown (05/2014): Brown isn't producing and Phillies fans are quickly turning on him.

Why Domonic Brown's power numbers have declined (04/2014): PHOENIX - Domonic Brown did not attempt to pull a J.P. Howell slider aimed for the outer part of the plate. He stayed back, lowered his black bat to meet the 79-m.p.h. pitch, and drove it to the opposite field.

Puppy Bowl X: Domonic Brown's dog Tyga competes, doesn't win anything (02/2014): While the rest of the world was watching the Super Bowl on Sunday night, Phillies outfielder Domonic Brown was instead tuned into the Puppy Bowl X, the yearly Animal Planet competition.

Phillies' Claus a big hit: Domonic Brown holds annual Christmas event at Fort Pi (12/2013): FORT PIERCE — Santa Claus gets asked a lot of interesting questions this time of year, but 15-year-old Marcus Brown’s might have been a first.

Domonic Brown gives his side of the story (10/2013): The Phillies outfielder says he meant no disrespect when he wore a Cowboys jersey to Sunday's Eagles game.

PHOTO: Domonic Brown Is A Cowboys Fan (09/2013): Phillies left fielder Dom Brown posts a picture on Twitter of himself wearing a Cowboys jersey.

Phillies Notebook: Domonic Brown says he's feeling much better (07/2013): But under MLB rules he will have to miss at least 2 days

Don't call it a comeback - Domonic Brown never left (06/2013): Check out the young slugger's numbers over the last month.

Domonic Brown is white hot, hits two more homers to end May (05/2013): Phillies outfielder Domonic Brown ended April on a sour note, hitting just .233 with three home runs in 97 trips to the plate. With two home runs in tonight’s loss to the Brewers, Brown moved into third place in the Major League leaderboard for home runs on the season with 15 as he wraps up…

Domonic Brown thrives at plate for Phillies, questions still remain in field (04/2013): It is harsh reality that if the Phillies want to reep the benefits of Domonic Brown's bat, they are going to have to live with his struggles in the field.

How good can Phillies' Domonic Brown be? (03/2013): Domonic Brown had a strong spring, but he has to prove he can do it in the regular season

Phillies pin hopes on Domonic Brown (02/2013): CLEARWATER, Fla. - Domonic Brown knows this is his moment. He has been blessed with great talent and cursed with great expectations, set back by injuries and set aside by a franchise in constant win-now mode.

Over the last two years, Domonic Brown has been better at baseball than Delmon Y (01/2013): I'm already on record as saying that the Delmon Young signing makes some sense for the Phillies. At $750,000, there is not a lot of downside.

Phillies Notes: Phillies' Domonic Brown saw some growth in his game (10/2012): WASHINGTON - There are no guarantees in this game, a principle that 25-year-old Domonic Brown learned quite well. He's been labeled an untouchable, a bust, and a starter. That latest designation came July 31, when the Phillies traded away two-thirds of their starting outfield.

Domonic Brown back in Phillies lineup (09/2012): After starting just one of the previous eight games with a sore left knee, Brown returns to the lineup on Labor Day.

Game 129: Domonic Brown is back (08/2012): Domonic Brown returns to Charlie Manuel's lineup Tuesday after a two-game, three-day break. Brown was suffering from minor left knee soreness. He dealt with right knee injuries earlier this season while at triple-A Lehigh Valley.

Phillies Notebook: Domonic Brown's promotion a major opportunity (07/2012): WASHINGTON - The questions were similar to the ones Domonic Brown answered the last time he thought he was here to stay.

Domonic Brown confident, having fun as Lehigh Valley IronPigs everyday left fiel (04/2012): The 24-year-old said: 'It's only been a month, but I think I'm doing pretty well out there.'

Cleveland Indians probably can't pry Domonic Brown away from Philadelphia Philli (03/2012): The Phillies need hitting because of injuries to Chase Utley and Ryan Howard, so a deal is unlikely for the outfielder prospect.

A look at Domonic Brown, and why he should still be on your radar (11/2011): Domonic Brown has enough of a life that he probably is not sitting at home reading High Cheese and wondering how, exactly, we've reached a point where we don't even mention his name when talking about the Phillies' situation in left field. But just in case he is: "Yo, Dom, We got your back, bud!"

Domonic Brown could return to Phillies (08/2011): PHILADELPHIA – In the eighth inning of the Phillies’ 7-4 loss to the Mets on Wednesday, Ross Gload ripped a one-out, pinch-hit double to right field.

Domonic Brown goes 1 for 3 in return to Lehigh Valley (07/2011): Less than 24 hours after starting in right field at Citizens Bank Park, Domonic Brown found himself in Lehigh Valley surrounded by the hijinx and high pants that go along with minor league baseball.

Philadelphia Phillies can afford to have Domonic Brown grow up in the big league (06/2011): The Phils' young right fielder is learning how to play Major League Baseball in the best place possible.