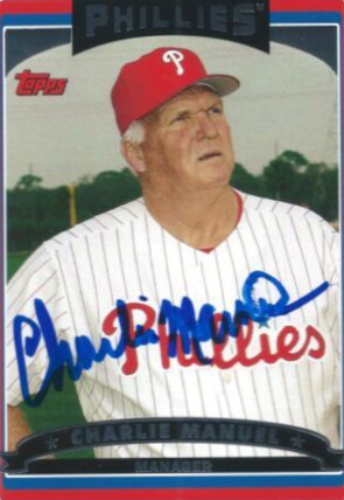 Charles Fuqua Manuel Jr. (born January 4, 1944), is an American former professional baseball player, coach, and manager. During his playing career, he appeared over parts of six Major League Baseball seasons for the Minnesota Twins and Los Angeles Dodgers, before playing another six seasons in Nippon Professional Baseball with the Yakult Swallows and Kintetsu Buffaloes. Over four successive seasons in NPB, Manuel hit at least .312 with 37 home runs each season and won the 1979 Pacific League Most Valuable Player Award. After his playing career, he coached and managed the Cleveland Indians and managed the Philadelphia Phillies, winning the 2008 World Series over the Tampa Bay Rays and the 2009 National League Championship Series over the Los Angeles Dodgers. He was inducted to the Philadelphia Baseball Wall of Fame in 2014. On August 13, 2019, Manuel replaced John Mallee as hitting coach for the Phillies for the remainder of the season. More about Charlie Manuel

Current items with a signature of Charlie Manuel

These are the most current items with a signature of Charlie Manuel that were listed on eBay and on other online stores - click here for more items.

Traded items with a signature of Charlie Manuel

Most recently, these items with a signature of Charlie Manuel were sold on eBay - click here for more items.

Today’s Game: Charlie Manuel - Joe Posnanski (12/07/18): All this week we’re taking a closer look at the 10 people on the Today’s Game Era Ballot for the Hall of Fame. There’s a beautiful irony in that some of the greatest hitting coaches in baseball history — Charlie Lau, Walt Hriniak and Kevin Long, for example — couldn’t actually hit a lick themselves.

Charlie Manuel rebuffs offer to join Baltimore Orioles, could see bigger role wi (12/19/14): Congratulations! Your weather is set to . You can change the location at any time. Don't have an account?

Charlie Manuel rejects Orioles overtures; could have increased presence with Phi (12/2014): Charlie Manuel will not be Baltimore's hitting coach, and he is expected to have a visible presence at spring training with the Phillies.

Bob Shryock: Great weekend for Charlie Manuel - the man and the horse (08/2014): Charlie Manuel, the ex-Phillies' manager, was inducted into the club's Wall of Fame Saturday night.

Ex-manager Charlie Manuel to be inducted into Philadelphia Phillies Wall of Fame (02/2014): It was a foregone conclusion, the Phillies giving Charlie Manuel a plaque in center field at Citizens Bank Park, a place where all Phillies greats earn a place of honor. He is the most successful manager in team history, after all.

Charlie Manuel is back with the Phillies as a senior adviser (01/2014): Former manager led Philadelphia to the 2008 World Series title

Ex-Phillies manager Charlie Manuel expresses interest in Detroit Tigers job: 'I' (10/2013): Manuel told Detroit Sports 105.1 that his agent will be in contact with Dave Dombrowski.

McCaffery: Charlie Manuel starts swan song with note of realism (07/2013): PHILADELPHIA — Charlie Manuel’s contract will yellow and crumble and disappear after at the end of this season. His patience — legendary, admirable and until Tuesday unbreakable — never did make it that far.

Charlie Manuel caption contest results (06/2013): On Monday, I asked for your best captions suggestions for my new Charlie Manuel cartoon. Now, it's time to find out who came on top. "Hey Howard - that beard looks about as old and tired as my starting lineup."

Phillies' Charlie Manuel fouls off last laugh (04/2013): CLEVELAND - Northeast Ohioans thought Charlie Manuel was a country bumpkin, a good ol' boy from the Blue Ridge Mountains. His West Virginia twang made for good impersonations; his unassuming nature made him seem like a pushover.

Charlie Manuel tests different top of lineup (02/2013): CLEARWATER, Fla. — Ask the manager, and he is sure to offer a steadfast defense of Jimmy Rollins batting leadoff. Charlie Manuel has done such already this spring. It is quite likely Rollins is the first Phillies batter to hit April 1.

Charlie Manuel is excited about Phillies bullpen (01/2013): The banquet season is almost over for Charlie Manuel, who yearns for something other than hefty dinners and handshakes. He wistfully spoke Monday about new batting cages installed in Clearwater, then said there are many "ifs" on his roster from the lineup to the defense and the pitching.

Charlie Manuel Excited About Utley’s Return (06/2012): Phillies second baseman Chase Utley is expected to be in the Phils lineup for the first time this season on Wednesday night which manager Charlie Manuel is looking forward to.

PHILLIES FILES VIDEO: Action clips and audio of Charlie Manuel (02/2012): CLEARWATER, Fla. — It seems as though experiment No. 1 turned out good.

Charlie Manuel Show On June 28 (06/2011): The New Talk Radio 1210 WPHT’s Dom Giordano with Phillies skipper Charlie Manuel will be live on 1210 WPHT, over the Internet at cbsphilly.com

Charlie Manuel greets fans in southern Chester County (05/2011): EAST NOTTINGHAM — It was a Phillies kind of day in the Oxford area on Saturday as fans lined up at Country Chrysler to spend a moment with team manager Charlie Manuel.

Charlie Manuel: Manny Ramirez 'ran out of bullets' (04/2011): ATLANTA — There was a tender moment during the 2008 postseason that told you a little bit about the relationship between coach and player.

PHILLIES: Skipper Charlie Manuel wants an extension before Opening Day (02/2011): CLEARWATER, Fla. – The throng of visiting media that took over Clearwater for the made-for-TV, Phillies starting rotation press conference will drive across the state in the next two days, bound for Jupiter.

Q&A: Charlie Manuel, the family man (01/2011): Question: You have two kids that we rarely hear anything about. Could you talk about them?