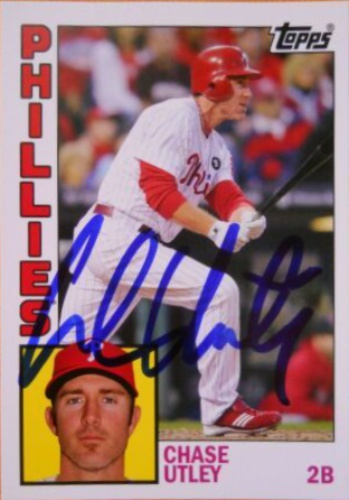 Chase Cameron Utley (born December 17, 1978), nicknamed "The Man" and "Silver Fox", is an American former professional baseball second baseman who played in Major League Baseball (MLB) for 16 seasons, primarily for the Philadelphia Phillies. He also played for the Los Angeles Dodgers. He is a six-time All-Star, won a World Series with the Phillies in 2008, and was chosen as the second baseman on the Sports Illustrated All-Decade Team for the 2000s. He batted left-handed and threw right-handed. More about Chase Utley

Current items with a signature of Chase Utley

These are the most current items with a signature of Chase Utley that were listed on eBay and on other online stores - click here for more items.

Traded items with a signature of Chase Utley

If you're interested in Chase Utley Rookie cards you might want to take a look at our sister site that specializes in Baseball Rookie Cards only.

The most expensive item with a signature of Chase Utley ((3) Phillies Chase Utley GAME USED ITEMS ,BAT BASEBALL, PANTS AUTOGRAPHED) was sold in July 2019 for $1400.00 while the cheapest item (Chase Utley Autographed Baseball w/COA) found a new owner for $0.01 in December 2008. The month with the most items sold (156) was June 2010 with an average selling price of $24.74 for an autographed item of Chase Utley. Sold items reached their highest average selling price in May 2019 with $242.00 and the month that saw the lowest prices with $2.99 was November 2020. In average, an autographed item from Chase Utley is worth $32.00.

Most recently, these items with a signature of Chase Utley were sold on eBay - click here for more items.

N.J. Sports Now: Phillies' Chase Utley deserves same scrutiny as Ryan Howard (04/14/15): Ryan Howard gets the brunt of criticism in Philadelphia, but Chase Utley could be the next albatross contract for the Phillies.

Phillies vs. Washington Nationals starting lineups: Chase Utley out, Cody Asche (04/12/15): Chase Utley is getting a day off.

Chase Utley “will eventually give in to a deal” (04/2015): Chase Utley has said many times before that he wants to finish out his contract with the Phillies -- a contract that runs through 2018 via some rather complicated vesting options ...

Would Chase Utley listen if Phillies presented potential trade? (02/2015): Congratulations! Your weather is set to . You can change the location at any time. Don't have an account?

MLB hot stove: Chase Utley wants to remain with Phillies, despite rebuilding eff (12/2014): Phillies second baseman has not asked for a trade ... yet.

MLB hot stove: Toronto Blue Jays inquire about Phillies' Chase Utley, Cole Hamel (11/2014): Interest in Phillies veterans appears to be picking up as Chase Utley is latest to be mentioned in trade rumors this week.

Phillies manager: Moving Chase Utley to first base 'would eliminate a little wea (09/2014): If the Philadelphia Phillies can trade Ryan Howard this offseason, the list of candidates to replace the veteran first baseman could include longtime teammate Chase Utley, who's served as the club's primary second baseman since 2005.

Phillies: Chase Utley reaches 1,500-hit milestone quietly (06/2014): The milestone was the highlight in a 3-2 loss to the Atlanta Braves Sunday that dropped the Phillies 10 games under .500 and eight games back of the division-leading Braves in what looked like a death knell for this team and nucleus.

Chase Utley is a five-alarm fire right now (04/2014): The Phillies' second baseman has been on an absolute tear to start the season.

Philadelphia Phillies need more than a Chase Utley appearance to warm up this of (01/2014): The Phillies trot out their reticent second baseman to put a happy face on the 2014 season

Figuring the Chase Utley factor (07/2013): Re-signing Chase Utley has a profound effect on a Phillies team that is trying to transition to respectability.

Chase Utley taking his recovery slow (05/2013): Chase Utley took ground balls on Thursday. His most important test, swinging a bat, will not happen for some time. The second baseman was injured May 21. It could be a month total before he is back.

Phillies 2013 preview: How Chase Utley ranks among NL No. 3 hitters (03/2013): Here is how the Phillies compare to the rest of the National League in the three-hole, base on the total number of bases a player creates divided by the total number of outs he creates, using the last three years as the sample size (see the previous post for a more thorough explanation).

Treat for Phillies in spring debut: Chase Utley plays (02/2013): CLEARWATER, Fla. - Chase Utley has yet to appear on the daily Phillies medical report so loathed by Charlie Manuel. The blue step stool used as an aid for fielding groundballs remains stored in a closet. There are no secret trips to knee specialists.

What to Expect: Chase Utley (01/2013): What will the veteran second baseman give the Phillies this season? Photo Credit: Getty Images

Inside the Phillies: Phillies need Roy Halladay and Chase Utley to be healthy (11/2012): INDIAN WELLS, Calif. - This market opened like so many before it. Baseball's general managers met for a few days at a resort and publicly downplayed an industry awash in disposable cash while player agents made hefty initial demands.

Phillies' Chase Utley: An aging star in transition (09/2012): Baseball's postseason is going to begin in a week without the Phillies being a participant for the first time in six years.

David Murphy: Third opinion on Chase Utley's possible switch (08/2012): THERE IS no question that Chase Utley taking ground balls at third base constitutes news, especially when you consider that Wednesday night's game between the Mets and Phillies featured two teams jockeying for position in next June's draft.

What is really up with Phils' Chase Utley? (04/2012): Earlier this month, CSNPhilly.com reported that Philadelphia Phillies' second baseman Chase Utley would be leaving the club and returning to Arizona to work with his physical therapist.

Why Do Fans Love Chase Utley? (02/2012): Phillies fans love Chase Utley. What is it about Utley that keeps him in the fans' favor?

Philled In: The case for resting Chase Utley (01/2012): If you watched enough of those fruitless at-bats in August and September, you don't need any stats to explain that Chase Utley was hardly himself in 2011.

Yardwork: K-Rod Unhappy With Role, and Chase Utley is a Meanie (09/2011): Between Francisco Rodriguez stating he's unhappy with his role and Prince Fielder acknowledging he has a month or so left in Milwaukee, Brewer fans must be thrilled.

The official score of MLS, Pocono and Chase Utley (08/2011): Another 1-1 tie, a shortened Pocono race and Phillies at the bat.

Jim Tressel – Jack Nicklaus – Chase Utley – Jimmy Rollins – John Mayberry Jr. (06/2011): There is a school of thought, not necessarily a small one, which believes we should pay our college athletes.

BLOG: The Mere Presence Of Chase Utley (05/2011): By Bill Campbell: Key team players are described in various ways. Around here at the moment, it’s Chase Utley. That doesn’t necessarily mean he has to hit safely in key spots or make the big turning-point defensive play.

Chase Utley hasn't seen a pitch, but he could be an all-star (04/2011): PHOENIX - Major League Baseball unveiled the official All-Star Game ballot Tuesday in a ceremony at Chase Field, where the 82d midsummer classic will be played this July.

Is Chase Utley's knee pain a reminder of the Phillies ticking clock? (02/2011): CLEARWATER, Fla. - Time, not an MRI machine, will reveal whether the pain in Chase Utley's right knee is a momentary February concern or the first sign of bigger problems.