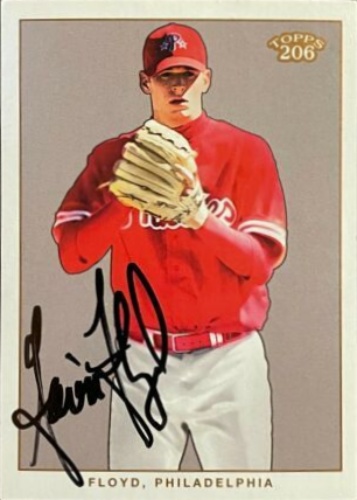 Current items with a signature of Gavin Floyd

These are the most current items with a signature of Gavin Floyd that were listed on eBay and on other online stores - click here for more items.

Traded items with a signature of Gavin Floyd

The most expensive item with a signature of Gavin Floyd (05 Ryan Howard +Gavin Floyd Signed Auto Sweet Spot Sigs) was sold in January 2011 for $71.99 while the cheapest item (Gavin Floyd Signed 8X10 Photo White Sox Phillies Mound) found a new owner for $0.01 in November 2008. The month with the most items sold (28) was May 2008 with an average selling price of $10.69 for an autographed item of Gavin Floyd. Sold items reached their highest average selling price in September 2022 with $46.00 and the month that saw the lowest prices with $0.89 was July 2012. In average, an autographed item from Gavin Floyd is worth $5.99.

Most recently, these items with a signature of Gavin Floyd were sold on eBay - click here for more items.

Gavin Floyd to undergo elbow surgery Tuesday (03/16/15): The Indians took a gamble that Gavin Floyd would be healthy this season when they gave him a one-year, $4 million deal over the winter, but they might not get anything from him.

Tribe pitcher Gavin Floyd may need elbow surgery again (03/12/15): GOODYEAR, Ariz. (AP) — Gavin Floyd’s comeback season could be over before it started. The Indians said the right-hander will be sidelined for “the foreseeable future” after reinjuring his troublesome pitching elbow.

Gavin Floyd stifles Rockies for first win with Braves (06/2014): Pitching well since coming back last month from reconstructive surgery on his right elbow, Gavin Floyd cemented his return with the only missing element - a win.

Mount St. Joseph grad Gavin Floyd aims to show 1st start after surgery no fluke (05/2014): ATLANTA -- Gavin Floyd's debut with the Atlanta Braves could hardly have gone better. Now the veteran right-hander is out to show that his first game after Tommy John elbow surgery wasn't a mirage.

Gavin Floyd Returns From Disabled List (07/2012): Provided by SBNation.com White Sox starter Gavin Floyd had a bit of a rest due to elbow tendinitis; now he's back to the team.

Sports Blitz: Mount St. Joseph grad Gavin Floyd and a kind donation (11/2011): Gavin Floyd, once a baseball star at Mount St. Joseph's and now a pitcher for the Chicago White Sox, recently used his good fortune from a productive career to purchase a 24-year-old college student the gift of a lifetime.

Gavin Floyd sharp for White Sox in loss to Royals (09/2011): CHICAGO — Gavin Floyd can take something positive from his final start of the season.

Gavin Floyd Shines As White Sox Beat Indians 3-0 (07/2011): Gavin Floyd allowed four hits over 7 2-3 innings and Carlos Quentin hit a three-run homer in the fifth to give the Chicago White Sox a 3-0 victory over the Cleveland Indians on Friday night.